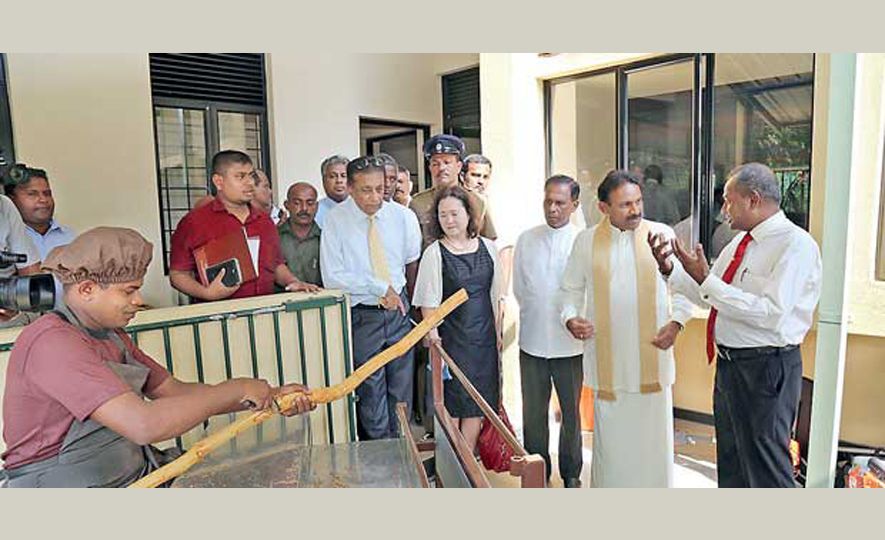 As the number one exporter of Ceylon Cinnamon in the global market, Sri Lanka’s cinnamon industry holds immense importance for the national economy.

The industry plays a valuable role not only in boosting export earnings, but also in enhancing the rural economy. The cinnamon industry generates revenue and employment for 400,000 workers, mainly comprising of smallholders and cinnamon processors or peelers.

However, despite this leadership position, the competitiveness of Ceylon cinnamon is being challenged due to deteriorating quality, productivity and emerging competition, seriously threatening its global market share. The scenario is further aggravated due to declining skilled workforce for Cinnamon value chain activities.

In response to these emerging challenges, the Cinnamon Training Academy (CTA) was established with the support of Ceylon Cinnamon Association & the Spice Council of Sri Lanka the apex body of the spice industry comprising all private and public sector stakeholders facilitating and upgrading the cinnamon producing and manufacturing process. Although CTA has been in existence since June 2006, its mandate and scope is being aggressively expanded currently by rendering it a center of excellence for the cinnamon industry.

CTA’s main objective is to train adequate number of cinnamon processors in order to increase the cinnamon exports by 30-50 within the next few years and also to break into high-end value-added quality conscious European, North American and Japanese markets. This rejuvenated training programme is a pioneering and unique effort of the stakeholders in the spice industry, to establish a unified cinnamon growing and processing system that includes building a nationally recognized, certified and qualified workforce for the industry.

CTA has made rapid strides in building its infrastructure in two stages. The first stage involved constructing the cinnamon processing area, adding a lunch room and kitchen, completed in April 2015. The funding for this stage was provided by the Government of Sri Lanka through the Ministry of Industry and Commerce/Sri Lanka Export Development Board to the tune of LKR 28.5 million. Stage two of the construction plan proposes to build a store room, a lecture hall and hostel facilities for male and female trainees to enable to participate at residential training programmes under the National Vocational (NVQ) education system.

The CTA through the support of United Nations Industrial Development Organization (UNIDO), Standards and Trade Development Facility (STDF), and in coordination with The Spice Council (TSC) and other relevant organizations has established a training programme for the cinnamon industry based on National Vocational Qualification (NVQ) and Competency Based Training (CBT) framework accredited by Tertiary and Vocational Education Commission (TVEC).

The CTA is now equipped to implement the NVQ training programmes for occupations, namely, harvesters, processors, factory officers and supervisors under factory and field operations. The occupations are recognized and certified for NVQ 3 and 4 levels. The course content is programed in to build competencies in performing different tasks identified for cinnamon factory and field operations.

The training framework includes National Competency Standards (NCSs), for cinnamon field and factory operations; Assessment Resources (ARs) for assessing the trained individuals; National Curricula for promoting unified training methodology for cinnamon industry and endorsed/accredited by TVEC as a national document. Based on the curriculum the UNIDO—WTO-TSC project sponsored the preparation and establishment of lessons plan and teaching materials validated by the industry stakeholders. The machinery, equipment, tools, furniture, as required for the training function at the CTA are funded by STDF and UNIDO.  The uniquely structured training framework and institutional set up for delivering National Vocational Qualification based on established National Competency Standards, for the cinnamon industry stakeholders, especially the workforce, enhancing the competitiveness in the global trade. Further, the training framework will support the industry to improve the quality of produce by enhanced compliance capacities on food safety and hygienic standards confirmed to end-market requirements of the international destinations.

The industry in the face of emerging competition and threat of losing market share has been looking at diverse options and strategies to consolidate and expand exports of Ceylon cinnamon from Sri Lanka. As a result, the CTA, a public-private partnership endeavor validated by all concerned stakeholders of the industry is a timely option for mitigate, consolidate and expand the market position by enhanced productive/compliance capacity of Ceylon cinnamon value chain of Sri Lanka.