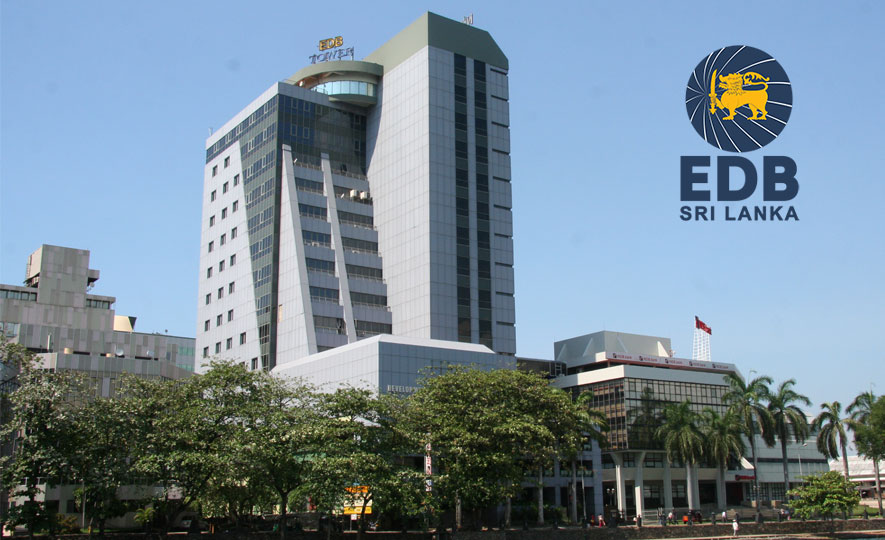 The Sri Lanka Export Development Board (EDB) which turned 43 years on the 1st of August is the premier state organization for the development and promotion of exports in Sri Lanka. The Board plays myriad roles in the export sector of the economy, as a policy advisor, monitor, promoter, facilitator and knowledge provider in carrying out its responsibilities of implementing strategies for achieving national export targets.

The vision of the EDB, “To position Sri Lanka as a prominent export hub for innovative products and Services” is aligned with the development vision of the Government as well as the vision of the National Export Strategy, while the mission of the EDB, “Enable export competitiveness through innovation, entrepreneurship and global integration” is focused on increasing foreign exchange earnings and thereby contributing to the national economy.

In the 1970s, the International Trade Centre (ITC), the United Nations Conference on Development of Trade and Tariff, pressed the establishment of Trade Promotion Organizations (TPO) in member nations with the objective of promotion and development of the export trade. The establishment of the Export Promotion Secretariat in 1972 in Sri Lanka to support export development did not achieve the desired results. This inspired the business community to open a dialogue within their community on the urgent necessity of establishing a national body for the promotion and development of exports.

The EDB was established under the direction of LateLalith Athulathmudali, then Hon. Minister of Trade and Shipping, on 1st August, 1979, under the Sri Lanka Export Development Act No. 40 of 1979. The first significant step of this Act was to empower the EDB with wide powers on export promotion and development for performance of its functions at the highest standard in the best interest of the nation.

The structure set up for the EDB was unique. An Export Development Council of Ministers was formed under the Chairmanship of His Excellency President. The Hon. Ministers in charge of Trade and Shipping, Industries, Fisheries, Finance, Foreign Affairs, Planning and Rural Industries were the other members of the Council.

The objective of the Council was to advise the EDB with directives for prompt execution of the decisions taken by the Export Development Council of Ministers. This feature could not be perceived in any of the other government institutions. Hence, it is an attempt to directly showcase the national interest in export promotion.

As a leading government institution in respect of export development , the EDB was entrusted with duties of greater responsibility such as to advise the Council of Ministers on National Export Development Policy; formulate National Export Development Plans; facilitate the supply and diversification of products and services; execution of research and market development programs; help resolve the issues involving the exporters within the government; develop exporting skills; extend advisory assistance to the exporters and improve international relationships with the related agencies.

For the first time in the history, an income of US$ 12.5 billion was earned from merchandize exports during 2021, reflecting a tremendous achievement in exports despite the challenges posed by the COVID-19 and other supply chain constraints.

Monthly Merchandize Export Performance, 2020 - June 2022 in Millions of US$ 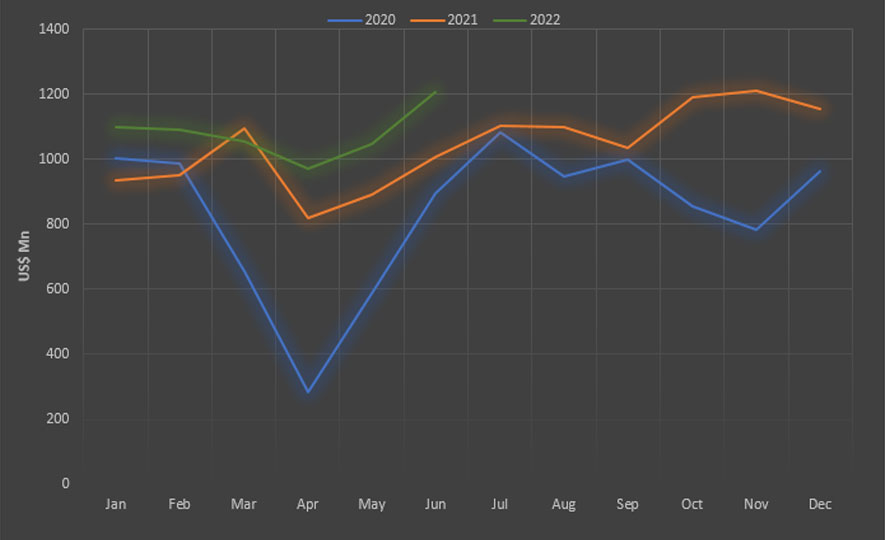 The NES has empowered the emergence of new export industries and services such as ICT/BPM, Wellness Tourism, Electrical & Electronics and Boating Industry beyond the traditional export industries of apparel, tea, gems, spices and rubber.

Implementation of NES in collaboration with all public & private stakeholders while addressing major systemic issues hindering the export expansion, has helped to create sustainable and fast export growth for the benefit of all Sri Lankans.

With our highly talented and committed workforce, Sri Lanka’s ICT sector is both competitive and competent and can cater to a global clientele with sophisticated ICT business solutions. Sri Lanka is one of the best destinations for providing off-shore services for ICT and other services. The availability of cost-effective and highly skilled labour means that the country is one of the best choices when it comes to Business Process Management.IT-BPM industry and all its businesses collectively promoted globally under one common brand name; “Island of Ingenuity (IOI)”.

EDB has carried out a number of programmes over the last few years to give birth to new exporters and make them viable players in the international marketplace.

Under this programme, the Board has been able to develop 169 new exporters and introduce them to the international market, which epitomizes a significant victory. So far, 2,054 enterprises with export potential have been registered for this initiative. The EDB has also been able to create 555 indirect exporters through this novel concept.

The EDB plays a leading role in the improvement of export performance of Sri Lankan products and services through participation at international trade fairs, Apart from that, the EDB promotes Sri Lankan exports online via its E-commerce platform – EDB E-Marketplace - Sri Lanka's E-commerce window to the world, where local exporters can display their merchandise online and receive trade opportunities.

Demonstrating its competency and excellence internationally, the Sri Lanka Export Development Board (EDB) accomplished a valued achievement by becoming Runner-up at the World Trade Promotion Awards - 2022 under the category of “Best initiative for inclusive and sustainable trade” for its SME Export Coaching programme, which was conducted in late 2021. Other trade promotion organizations nominated for the award in the final round were from South Korea, the Netherlands, Zambia and Zimbabwe. Zimtrade – Zimbabwe was judged as the winner.

The award-winning SME Export Coaching programme was implemented by the EDB – Regional Development division during year 2021, for selected twenty-five (25) export-ready SMEs registered under the EDB – New Exporter Development programme in order to aid them to develop their capacities to enter the export market. Under this initiative, individual coaching sessions were conducted by 11 EDB officers, to guide the SMEs to prepare their own export marketing plans and the companies submitted 10 best proposals were granted financial assistance to implement a key activity in the marketing plans.

The EDB has launched the Sri Lanka’s country-of-origin trade mark for the spices sector. The “Ceylon Spice’’ master brand and other product brands will support growers, processors and manufacturers by helping them clearly identify their products as Sri Lankan-made and informs international buyers & consumers that all significant parts, produce, processing and products are of genuine Sri Lankan origin.

As a result of a painstaking, decade-long, arduous endeavour led by the EDB with the support of numerous public and private stakeholders, Ceylon Cinnamon was awarded the Protected Geographical Indication (PGI) status by the EU Commission in February 2022.

The Presidential Export Awards initiated by the EDB in 1981, are the most prestigious awards presented to exporters who have made a significant contribution the export effort of the country. Being an island nation, exports continue to play a crucial role in the Sri Lankan economy. This award ceremony signifies the enormous contribution and commitment of the exporters for the development of the country, and it encourages existing exporters to reach greater heights and serves an inspiration to non-exporters to become export champions.

The EDB’s 43rd anniversary falls due on 1st August. As the apex national organization in export development and promotion, the EDB deserves a high degree of praise for its outstanding contribution towards the socioeconomic development of the country. The EDB is fully committed to accomplish its vision of enhancing exports, diversifying the export basket, introducing innovation as well as generating employment opportunities that ensure sustainable economic development of Sri Lanka.