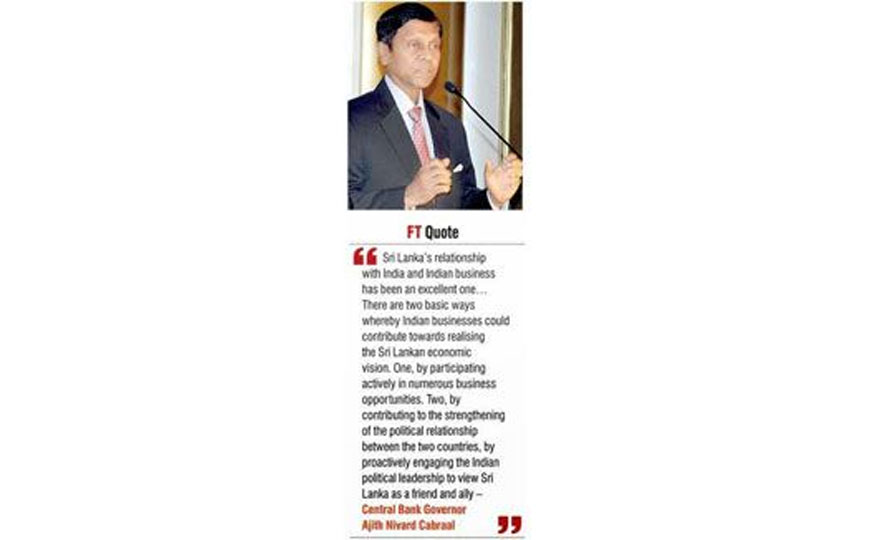 The Indian CEO Forum (ICF) held its AGM on Friday, 21 March, at the Taj Samudra Hotel, Colombo. Governor of the Central Bank of Sri Lanka Ajith Nivard Cabraal was the Chief Guest while High Commissioner of India Y. K. Sinha was the Guest of Honour. 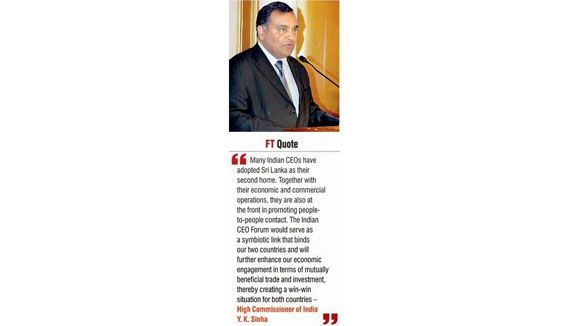 The objectives of the Indian CEO Forum is to promote and contribute to the economic growth of Sri Lanka through Indian investment, safeguard and strengthen existing economic cooperation, foster new economic ties between India and Sri Lanka, provide an open forum for the business leaders of Indian origin employed with Indian multinationals and Sri Lankan business/commercial organisations in Sri Lanka. ICF endeavours to showcase investment opportunities in Sri Lanka to potential new investors from India.

ICF President Sanjay Tiwari outlined the following focus areas for the next financial year in his communication:

Sinha in his remarks outlined the massive progress made in trade and cultural relations: “Actively partner with us to further strengthen the economic relations of the two countries by encouraging more Indian companies to invest in various sectors in Sri Lanka and likewise guide Sri Lankan entrepreneurs willing to do business in India or invest in India. The two countries will benefit by enhancing the existing synergies. Many of the Indian CEOs have adopted Sri Lanka as their second home. Together with their economic and commercial operations, they are also at the front in promoting people-to-people contact.

“The Indian CEO Forum would serve as a symbiotic link that binds our two countries and will further enhance our economic engagement in terms of mutually beneficial trade and investment, thereby creating a win-win situation for both countries. India and Sri Lanka enjoy a vibrant and growing economic and commercial partnership, with both trade and investment expanding greatly in recent years. The cornerstone of this relationship has been the India Sri Lanka Free Trade Agreement which was signed in 1998 and was implemented with effect from 1 March 2000. The FTA has led to the emergence of a genuinely vibrant economic relationship and made for a quantum jump in trade, investment and economic cooperation between India and Sri Lanka.

“On the investment front, top Indian companies have displayed great interest in Sri Lanka, investing in the country across sectors such as infrastructure, manufacturing, services, and construction. The cumulative FDI approvals for Indian investments stand about US$ 1 billion since 2003. Nearly US$ 2 billion worth of FDI has been committed by Indian companies for the next five years or so. Sri Lankan companies too are finding opportunities in the large Indian markets, leveraging FTA provisions.

“The bilateral economic cooperation has diversified across multiple areas of engagement, including trade in goods and services, tourism, infrastructure, education, science and technology, and agriculture. Air connectivity has gone up and almost one-fifth of tourist arrivals in Sri Lanka are from India.  The Colombo Port is a major trans-shipment hub for cargo originating in, or destined for, India. It has been estimated that nearly 70% of Colombo Port’s transhipment business is from India.

“The way forward for this dynamic economic relationship was charted during the visit of Anand Sharma, Minister of Commerce, Industry and Textiles, Government of India, to Sri Lanka in August 2012, when both sides decided to take several key steps to further deepen trade and investment relations. Proposal focusing on increasing Sri Lanka’s export capacity with promotion of manufacturing of products like automobile parts, engineering products and pharmaceuticals with Indian investment and forging linkages across the production and supply chains of the two countries were put forward. We have also set for ourselves an ambitious target of doubling bilateral trade to reach US$ 10 billion in next three years.”

Cabraal commends Sri Lanka’s “excellent” Sri Lanka-India relationship
Governor Cabraal at the outset indicated his “pleasant surprise that as many as 49 Indian business heads were part of the ICF and contributing to the growth of the Sri Lankan economy”.

Sharing his vision for the next three years he said: The vision for the Sri Lankan economy envisages a growth of about 8% per annum on a sustainable basis, and a per capita income of over US$ 4,000 before 2016… through stable and good governance, controlling inflation and investing in ‘stars of the future’.”

Cabraal stated that it is a matter of satisfaction that the past four years have been among the only five years of high growth + low inflation years in the post-1977 period. He listed out the challenges that Sri Lanka will have to deal with as it goes forward:

“To realise this vision on a sustained basis, India as one of Sri Lanka’s key overseas partners, can do much… Sri Lanka’s relationship with India and Indian business has been an excellent one. Total trade between Sri Lanka and India amounted to US$ 3.73 million in 2013 compared to US$ 673 million in 2001, which was the first full year the India-Sri Lanka FTA came into force. Sri Lanka’s exports to India which were at US$ 72 million in 2001 have increased to US$ 543 million in 2013. The ISFTA was signed on 28 December 1998.  It was enforced with effect from 1 March 2000 and this has benefited businesses from both countries, as elaborated by the High Commissioner.”

“The Sri Lankan people have greatest respect and love for India and its people,” said Cabraal, quipping that the only time that Sri Lanka does not wish India all the best is when Sri Lanka plays cricket against India!

The Governor added: “Business entities and personalities can be very helpful in improving and helping to develop relationships as well. Politicians usually follow business interests. Business and politics are closely-linked. Economic activity cannot flourish if a country is politically unstable.”

He opined that the ICF could be an important bridge to improve India-Sri Lanka relationships further and Sri Lanka has been generous with its economy for entry by Indian companies. Elaborating on what role the ICF could play in helping achieve his vision, he said: “There are two basic ways whereby Indian businesses could contribute towards realising the Sri Lankan economic vision. One, by participating actively in numerous business opportunities. Two, by contributing to the strengthening of the political relationship between the two countries, by proactively engaging the Indian political leadership to view Sri Lanka as a friend and ally.”