My biggest problem today is insufficiency of waste material 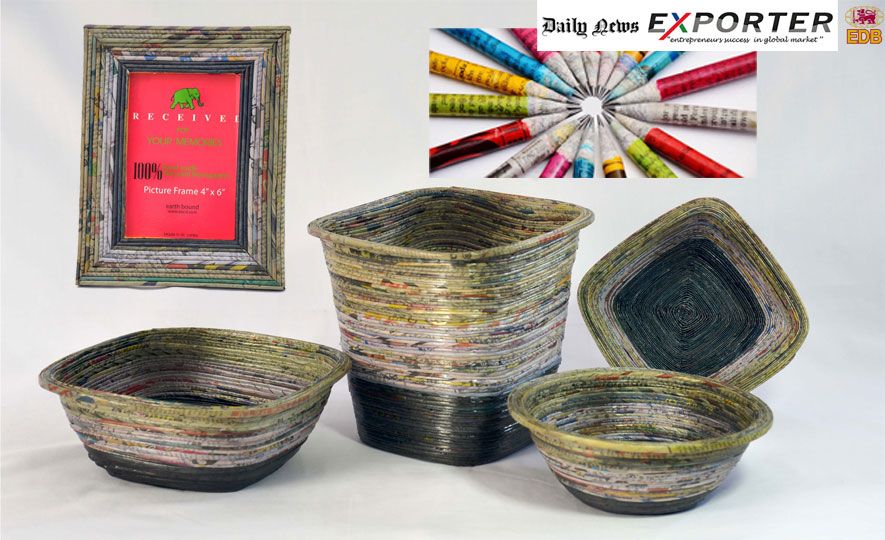 All of you may have undoubtedly heard the story of a man who became a millionaire through starting his business with a dead rat.  But, hearing of a story bearing a marked resemblance to that could cause amazement. 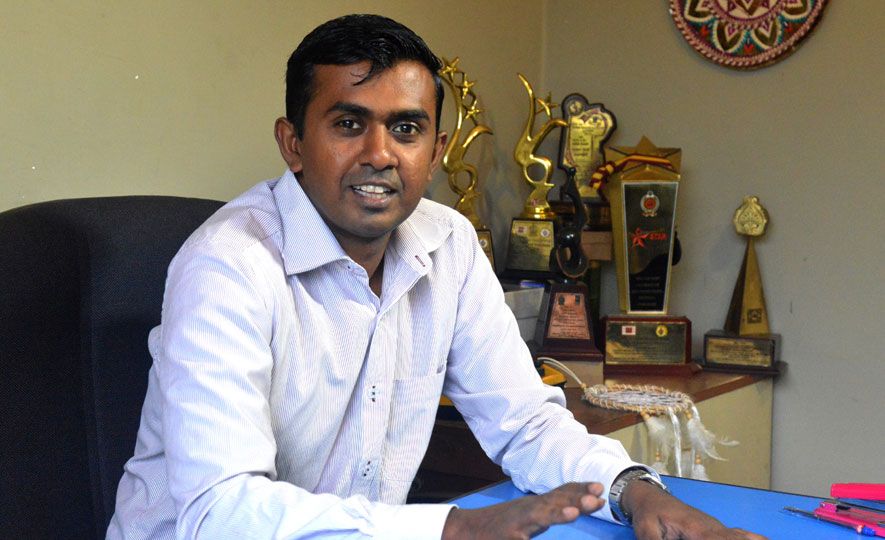 A person who has crossed both those thorny boundaries is the Managing Director of Earth Bound Creations, Sagara Ranga Liyanage.

Starting life as a photographer, he may have snapped the cherished memories of thousands of his clients through the lens of his camera.  Furthermore, he never forgot to note the beauty of, and damages to, the environment.

“I saw many a place in this beautiful country defiled by man by disposing waste matter in unsuitable places through the third eye-my camera lens.  As a nature lover, seeing such instances, I thought I must do something to the best of my ability to alleviate this problem.”

He began to do something creative with various items of waste being disposed to the environment with the idea of doing even a little thing to solve this environmental issue.

“I created greeting cards using throw-away papers and newspapers.  Even though I did it for my own amusement in the beginning, later I gave a few of them to shops in the Kandy area to be sold…”

Sagara’s greeting cards business was not so successful.  Like other novice creators, he did not get any encouragement.

“I trudged every street in Kandy carrying my greeting cards.  Many shop keepers said that those cards won’t sell.  But, I was confident that the people will realize their value…”

Sagara, an accomplished artist, is clever in recreating anything found in the surrounding environment attractively using his artistic skills.  Because of this, there was a vast difference between Sagara’s greeting cards and other greeting cards available for sale in shops.

Even though his production capacity was very small, Sagara had a good understanding of the future prospects of his business.  But, he was not knowledgeable about business acumen or the technical necessities for enhancing his patters and designs.

“I started all things from zero.  I had a liking for business matters but did not have any entrepreneurship knowledge.  In the earlier times, the Central Province Ministry of Industries and the National Crafts Council helped me in various levels.”

He was directed to the Export Development Board at that time.  Even though an industry with export possibilities, at that time Sagara’s enterprise had not reached the optimal level to be an export business.

“At that time, our products were not of sufficient quality to be directed to the export market.  They showed me the importance of obtaining experience in the local market before going for the export market.  Furthermore, the officials of the Export Development Board edified me on the development of quality that should be there in an export product, quality control and the importance of high finish of products.  Especially they directed me to two private sector organizations selling handicrafts.  The best part of my journey began from that point…”

“I visited one such organization 16 times.  In the end, they told me that my products are now in the proper condition.  The first time, they gave me an order for only Rs. 2000.00.  Most importantly, by recalling me 16 times, they had expected to test us whether we are dedicated to improve the quality of our products through accepting the advice of that organization.  Today, I fulfill about one billion Rupees worth of orders per month from that organization…”

Sagara, having made a considerable entry into the local market, once again sought the assistance of the Export Development Board to enter the export market.

“Recognizing me as an entrepreneur suitable for the export market, this time they gave me great assistance…” 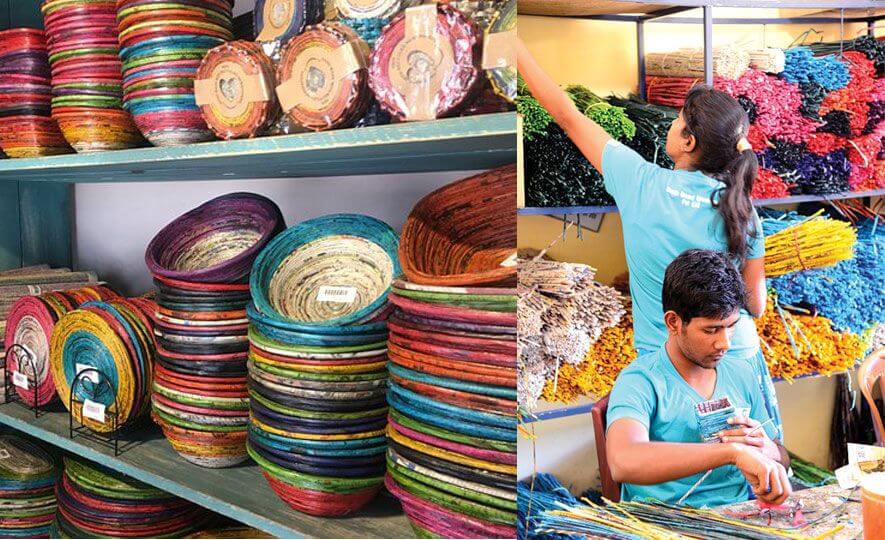 Earth Bound Creations manufacture a large number of products made using waste and refuse and environment-friendly raw material and export those products.  Today, the company has about 240 employees.  The number of suppliers dealing with Earth Bound Creations indirectly is also very large.  The Netherlands, Italy, Germany, Australia, Dubai and China have become their major buyers.

Problems and difficulties occurring in initiating and maintaining an industry is normal.  But, Earth Bound Creations is today facing a problem of a nature faced by no other company in the country.

He says that not lowering the quality of his products with the increase in demand was one reason for receiving orders without a break.  Furthermore, before directing a new product to the market and to increase the quality of his current products, he uses a research methodology original to him.

“Once I have manufactured a new product, I use that product in my home and office.  That is my production research methodology.  Through that, I experience the merits and the demerits of the product as well as points that need improvement first hand.”

Earth Bound Creations uses 99% female labour in its production process.  Furthermore, he had smartly managed to productively maintain his industry in the small space he has.

Next, we were interested to hear the message he has to convey to the society as a successful young entrepreneur.

“The business sphere now is very broad.  One might think that, everything consumers need at present in the market.  But, a person thinking in new ways will realize that so many opportunities exist for him in the market.  I have proved that practically.  That means, if you have the will, you can go on your journey, breaking new paths.”