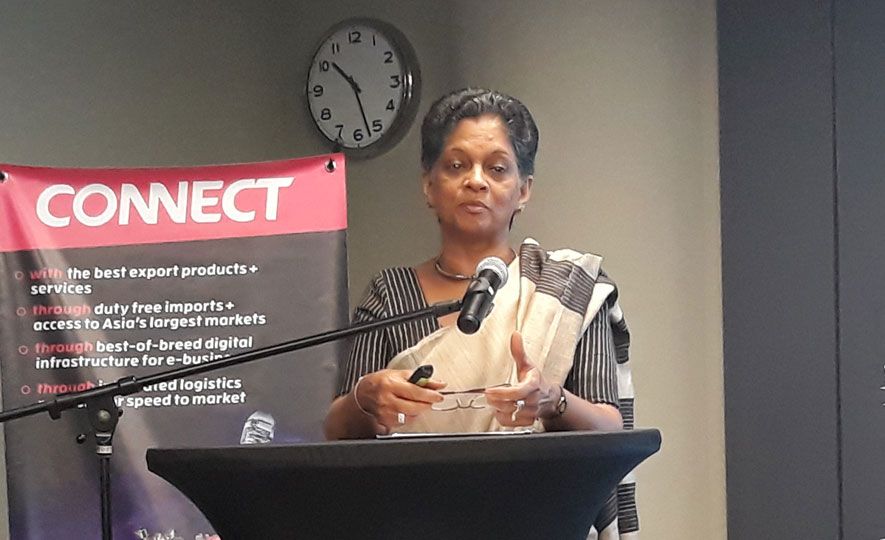 Sri Lanka’s share in the global export market and the contribution of exports to the national GDP has been in decline whereas imports to the country is in the increase. Further exports are dependent on imported inputs therefore, it is noted that the gap between export and import has been continuously increasing.

In addition, the export markets for Sri Lankan export products are highly concentrated. Sri Lanka’s exports were mostly dependent on the EU and North-American markets and recorded market share for USA and EU was aggregated to 60 % in 2018.

The European Union, as a Region, is the number one market for Sri Lanka which represents 30% of total exports. The major export partner countries in the EU Region are UK, Germany, Belgium, Netherlands, France, and Italy.

It is important to diversify Sri Lanka’s export product basket from “traditional” to “nontraditional” exports. The National Export Strategy (NES) being implemented from 2018 is focusing on this matter and there are 6 selected product sectors to develop during the next 5 years aiming at diversifying the export portfolio to intensify and accelerate the economic growth.

In the above context it is important for Sri Lanka to look into new markets which will provide opportunities immediately as well as in the long run.

Central Europe is an economically important region for Sri Lanka.  The potential of Central Europe remains largely untapped. This Region is much open for business and in particular attractive for long-term growth prospects.  Although Sri Lanka has a strong image in the region, our commercial engagement has been relatively limited.   Sri Lanka’s total bilateral trade with Central European countries is $ 810 million in 2018 with its total exports to Central Europe being $ 388 million and imports 422 million. But these figures do not tell the entire story as it contains Sri Lanka’s healthy trade relations with only few of the countries like Poland and Hungary.

Recently EU has announced its Europe-Asia connectivity strategy.  It is important that Sri Lanka should now look beyond the largest EU states of Western Europe and utilize the potential of cooperation in the Central European Countries which complies with the uniform market rules which apply throughout the EU.

In the above context, Sri Lanka Export Development Board organized an outward trade mission to Central Europe covering Hungary and Poland. This delegation was organized parallel to the First Session of the Sri Lanka Hungary Joint Commission held in Budapest, Hungary

GEED Technologies, Bio Foods (Pvt)Ltd, Vintage Teas Ceylon (Pvt) Ltd, Siddalepa Exports (Pvt) Ltd, Serendipol (Pvt) Ltd, Jetwing (Pvt) Ltd and Sen Wellness Sanctuary participated at the Business Forum followed by the B2B meetings held from 23rd -26th April 2019 in Hungary and Poland.  They had the added advantage of joining the official delegation to the Joint Commission which initially provided the opportunity to organize this mission and have credibility towards the mission.

Business Forum followed by the B2B meetings held on 23rd & 24th April 2019 in Hungary was organized by the Hungarian Export Promotion Agency (HEPA) and the Hungarian Embassy in New Delhi. The event was attended by the Co-Chairs of the Joint Commission; representing Sri Lanka, Secretary of the Ministry of Development Strategy & International Trade and H.E. István Joó, Deputy State Secretary for Export Development of Ministry of Foreign Affairs and Trade of Hungary H. This event was coordinated by Mr. Szolt Padazky, the Commercial secretary of Hungary Embassy in New Delhi. 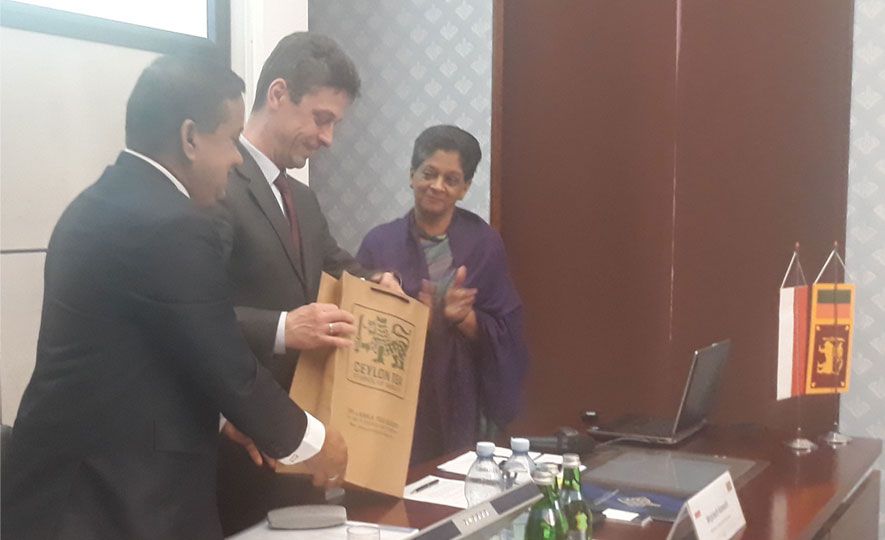 There were more than 45 Hungarian companies attended for the Forum and more than 30 B2B meetings were conducted. High interest were shown on Food Products, Wellness Tourism and Coconut Products.

Immediately after the Hungary programme, the delegation proceeded to Poland.  Poland is the largest economy in Central Europe and Eastern Europe. Poland’s population exceeds 38 million.

During this Outward Mission to Hungary & Poland, our participants discussed with their counterparts on different options of partnerships. It was identified that the Central European market is more affordable and a reachable market for Sri Lanka. During this Mission, the Sri Lankan trade delegation was afforded with the opportunity to develop business sales leads, joint ventures, and distributorships in both countries. 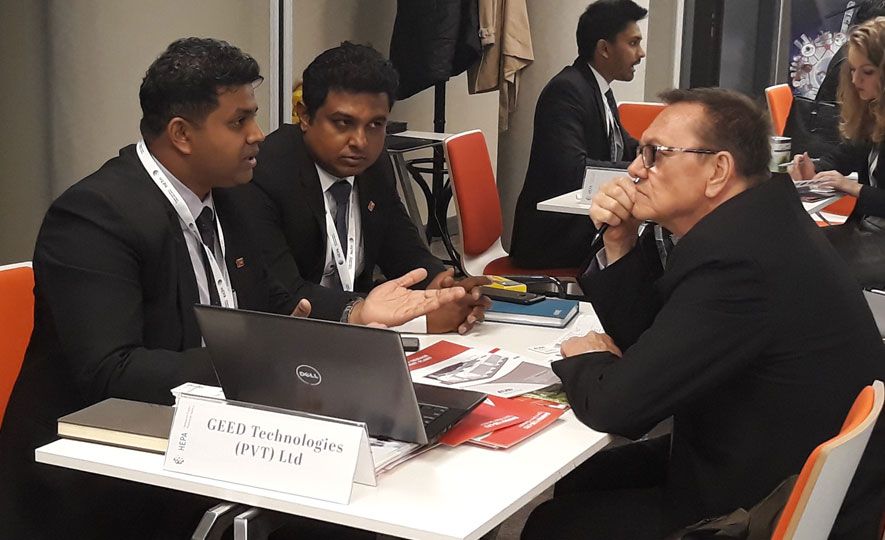 Mrs. Vidyani Hettigoda, Director, Siddhalepa Exports (Pvt) Ltd stated that they received  positive interests towards Ayurvedic products, hotels and franchise sectors from the counterparts they met in Hungary and Poland  and could establish a number of business contacts in both countries. Though Sri Lanka tourism industry braces for tough times, Polish companies specifically inquired for facilitation services for 1-2 weeks in Ayurvedic Health Resorts in Sri Lanka.

Further Mrs. Hettigoda mentioned that “I saw a lot of possibilities in Poland to promote Ayurvedic products and would like to explore those and saw a lot of potential in Hungary too. I developed many contacts, and  is now exchanging emails, so the relationships have begun”.

In the next few months, EDB anticipates that many of these leads will develop into formal agreements, and the EDB will continue discussions with the private sector mission participants to track their individual results.

During this visit, it was identified that participation of Sri Lankan companies in the sector of food & beverages at the World Food Poland would be beneficial to make further connections with the buyers in the Central Europe. It provides a platform to connect and conduct business with food and beverages industry buyers operating in Eastern Europe. The next World Food Poland will take place in March 2020 in Warsaw. Sri Lanka Export Development Board and Sri Lanka Embassy in Warsaw will encourage more participation from Sri Lanka at the forthcoming event.

During the Business Forum held at the Polish Chamber of commerce, the representative from the LOT Polish Airlines revealed that its’ new seasonal service between Warsaw and Colombo is among the shortest routes from Europe and adding a connection between Europe and Sri Lanka from the next winter season, which will “guarantee the shortest travel” to the destination from many European countries. This may lead to wider scope for greater economic cooperation with Sri Lanka and Poland for more trade as well as tourism. Tourist arrivals from Poland have risen by 7.5% to 9,836 in the first nine months of this year.