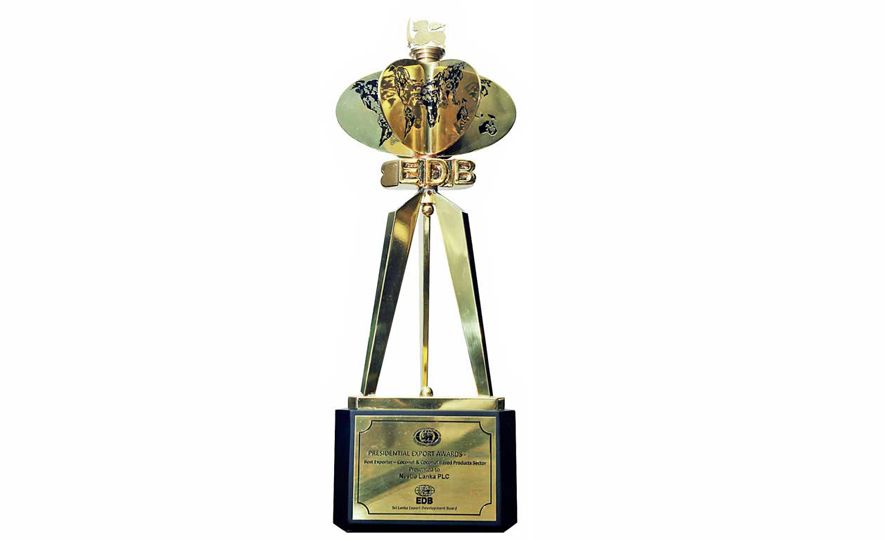 The 20th Presidential Export Awards Ceremony organised by the Sri Lanka Export Development Board (EDB) will be held under the patronage of President Maithripala Sirisena on 9 August commencing at 3 p.m. at the Bandaranaike Memorial International Conference Hall (BMICH).

The Presidential Export Awards (PEA) initiated by EDB in 1981 is the most prestigious award for exports in Sri Lanka and is presented to exporters who have made a significant contribution to Sri Lanka’s exports.

This year’s ceremony will recognise and salute the exporters for their excellence in the years 2014 and 2015 and the awards symbolise the national recognition of the exporters, particularly in non-traditional products and services.

In addition to the above categories, the 2014/ 15 PEA will introduce the following special awards.

The ‘Excellence in Sustainable Development Award’, has been introduced considering the importance placed by the World Trade Organization (WTO) and World Trade supporting organisations in sustainable development when formulating trade policies and as there is an increasing segment of buyers who look for fair trade labelling who are looking to source their requirements from companies that adhere to sustainable measures.

The contribution for sustainable development is measured in how business enterprises treat people, profit and the planet (PPP). Sustainable development includes the interdependent and mutually reinforcing pillars of economic, social and environmental sustainability. This award will recognise extraordinary systems, programs or processes that have far-reaching and positive sustainability efforts by the export industries.

The award for the ‘Highest Contributor from the Regions to the Export Supply Chain’ has been introduced to encourage the exporters to setup industries at the regional level keeping in line with the Government’s thinking of setting up economic/industrial zones in the regions.

The ‘Best Multinational Export Company (MNC)’ was introduced to encourage and recognise their contribution to the national export drive and also to enhance FDIs from MNCs to Sri Lanka.

The ‘Best Packaging Service Provider to Exporters’ award has been reintroduced in order to recognise the contribution made by the packaging industry to the export sector.

Presidential Export Awards will be presented to the Best Exporter in each of the following product categories in Industrial Products, Agricultural Products, Fish and Fisheries Products and Service sectors. This has been categorised into two segments, ‘Highest Value Added Exporter of the Sector’ and the ‘Highest Foreign Exchange Earner for the Sector’.

Furthermore, certain product sectors were sub segmented with effect from 2014.

Gems, jewellery and diamonds had been classified under one sector until 2013. As a result the gem and jewellery exporters could not aspire to win awards due to the fact that diamond exports represents a higher value, albeit with low value addition compared to gems and jewellery.

All coconut-based products were considered under the broad category of ‘Coconut and Coconut-Based Products,’ even though the usage and scale of production, etc. of coconut kernel and non-kernel products are entirely different.

However, over the past years, awards for this sector have been received by coconut non-kernel product exporters.

The selections for the awards were done by an eminent panel headed by a retired High Court Judge.

In total 113 awards will be presented during the ceremony.