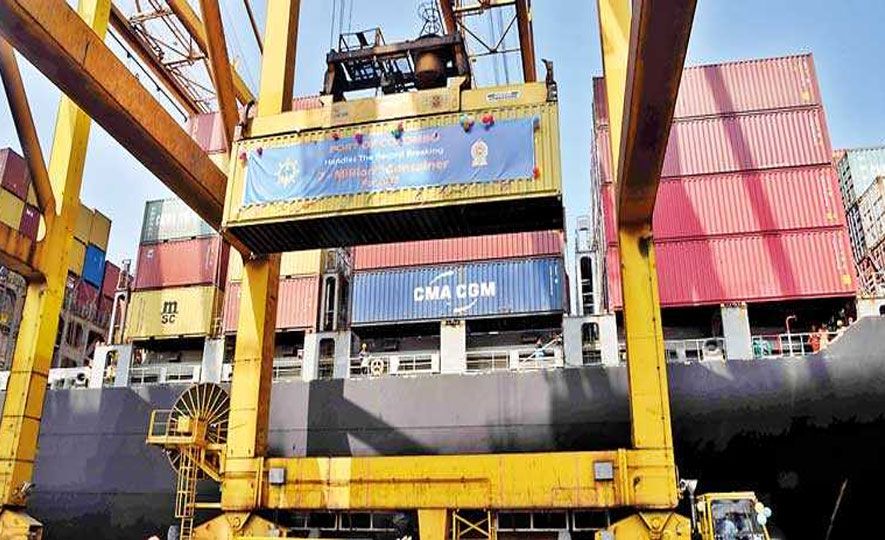 Ministry of Ports, Shipping and Southern Development Secretary and SLPA Chairman Dr. Dissanayake speaking at the occasion stated that the achievement was primarily possible because of the clientele of the Port of Colombo. He thanked the management and staff of JCT, SAGT, CICT, pilots and the navigational staff, all employees, trade unions, and also the former minister and the ministerial staff for their enormous contributions.

Dr. Dissanayake also stated that in moving forward, the present need to increase the capacity, change in the competition dynamics between the ports competing with the Port of Colombo, understanding and acting according to changes taking place within the shipping lines and the shipping industry should be strategically addressed in time.

He also stressed that the present Government was working towards having policies in place to capitalise on that situation as well as country’s location. He further said that the Government was also working on an appropriate and comprehensive marketing policy for the entire shipping industry of Sri Lanka. The Minister thanked everyone for their enormous contribution towards achieving this target.

Under the new collective agreement, it was expected to minimise the waiting time of all container vessels outside the port waters by allowing operations of vessels at the immediately available terminal. Further, through this agreement, terminals are also able to promote the Port of Colombo collectively and collaboratively in the arena of international maritime business.

The SLPA was awarded the Ports Authority of the Year 2018 Award by the Global Ports Forum (GPF). The fourth GPF awards ceremony, followed by the conference forum, was held in February 2018 at the Grand Hyatt Hotel in Dubai in the United Arab Emirates.

With the rapid development of port infrastructure including the construction of new terminals and the Public-Private Partnership in operations at the Port of Colombo, the TEU handling capacity at the port has dramatically increased during minimum lapses of time period after 2004.

Sri Lanka Ports Authority (SLPA) signed its first Public-Private Partnership (PPP) agreement with the South Asia Gateway Terminal (SAGT) in 1999 for 30 years that brought an investment of $ 220 million to date. Under the agreement, the SAGT owned 85% of shares locally and internationally whilst the SLPA owned 15%.

The next PPP agreement by SLPA for terminal operation was with the CICT in 2013 for 35 years that brought an investment of $ 550 million to the Sri Lankan port sector. The agreement took the same course to claim 85% of shares by the CICT and the rest by SLPA.

The Jaya Container Terminal (JCT) that occupies a 100% ownership by SLPA is operated as the main State-owned terminal. Although it showed a negative growth in 2016, with the accelerated procedures to increase efficiency, the terminal reached a 15% growth against 2017, handling 2.3 million TEUs by end 2018. The JCT has also recorded an increase of 23.3% transhipment volumes.

With the latest initiatives implemented at Sri Lanka Ports Authority (SLPA), all sectors of port operation show a rapid growth compared to similar periods during the past. A number of procedures are currently being implemented in all commercial ports around the country under the purview of SLPA to enhance the vision of the Government to develop Sri Lanka as the maritime hub in the region, optimise strategic location and economic contribution to the country, bring further development to the port sector in Sri Lanka, capacity building, increase port investment opportunities as well as promote T/S, value addition and tourism.