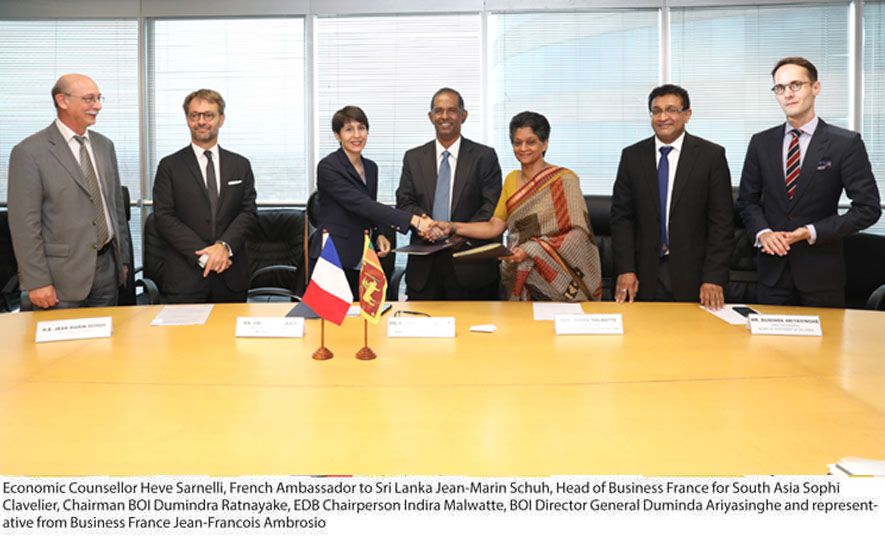 A Memorandum of Understanding was signed between the Board of Investment of Sri Lanka, the Export Development Board of Sri Lanka and Business France today. (13 July 2018)

BOI is the investment promotion agency of the Sri Lankan Government and functions as the central facilitation point for investors with the purpose of improving Sri Lanka’s investment climate.

The SLEDB is Sri Lanka’s premier organisation for the promotion and development of exports. Business France, an agency of the French Government, has the task of developing the internationalisation of French companies as well as promoting the image of France in the world and promoting foreign investments in France.

Also participating in this event was Ambassador of France to Sri Lanka and the Maldives Jean-Marin Schuh as well as senior officials of the BOI, EDB and Business France.

BOI Chairman Dumindra Ratnayake welcomed the other signatories to the MOU.  He stated: “This MOU is a very positive development since it will help to increase in the future investment in areas such as manufacturing and infrastructure. It also has to be seen in connection with the FTAs that Sri Lanka has entered into with India, Pakistan and Singapore and will sign in the future with China. These FTAs give market access to goods produced in Sri Lanka.”

He added: “Another important development is the Port City with many opportunities for construction and other investment in the future.”

Ratnayake added that the agreement would help to strengthen relations and facilitate trade and investment with France in the future.

EDB Chairperson Indira Malwatte stated: “We have had a very positive meeting with Business France. France is the sixth largest market for Sri Lankan exports to the European Union.”

She added: “Sri Lanka is to launch the National Export Strategy and this will also generate greater interest in our products. Currently we are promoting ship and boatbuilding, spices to be used in the manufacture of perfumes and cosmetics and of course the IT sector. It is our decision to focus just on three sectors for the moment and these are sectors where France is very strong.”

Head of Business France South Asia Sophie Clavelier stated: “We had a very positive meeting and I am excited to sign this MOU on behalf of the CEO of Business France.  We must ensure that this MOU must live and must work together in developing certain niche areas that Sri Lanka has to offer. One area which I would like to see develop is the Agro Sector where Sri Lanka has a lot of potential.”

Ambassador of France to Sri Lanka and the Maldives Jean-Marin Schuh also stated: “The MOU will enhance economic co-operation between Sri Lanka and France. We are currently focusing on expanding French exports as well as Sri Lankan investment in France.”

He added: “There are certain areas where l see many possibilities. For example, the French side could be interested in developing Sri Lankan ports as France has many leading shipping companies. I also see opportunities in the development of tourism.  This is an area where France has considerable experience and in 2020 our country will attract 120 million tourists in the course of the year. Other areas that are very promising are co-operation in the financial sector and also we are currently involved in the development of mini-dairies.”

Under the agreement, the parties are to exchange information and provide mutual support for the benefit of their clients and also to promote economic growth in both Sri Lanka and France.

Another clause of the MOU stipulates that the party will exert their influence for the promotion of commercial and industrial partnership between French and Sri Lankan companies.

The MOU also includes a commitment for the provision of commercial information and for assisting each other in organising fairs, seminars and business missions and co-operation in areas such as publications and creating awareness on investment environment, policies and regulations.

Each party is to provide the other with available and relevant information on initiatives with the purpose of increasing business for French and Sri Lankan companies in each other’s markets.

Furthermore, periodically meetings will be organised whenever it is necessary to evaluate the development of joint activities or future co-operation between the parties.

It is also important to note that each party is responsible for its own costs of operation. The agreement will be in effect for a period of two years and would be automatically renewed unless notice is given by one of the parties.

The MOU also covers intellectual property rights and the use of trademarks and logos of their signatories. There is also a mechanism for consultation between the signatories of the MOU.

The MOU augurs well for future expansion of tourism, trade and investment from France to Sri Lanka.