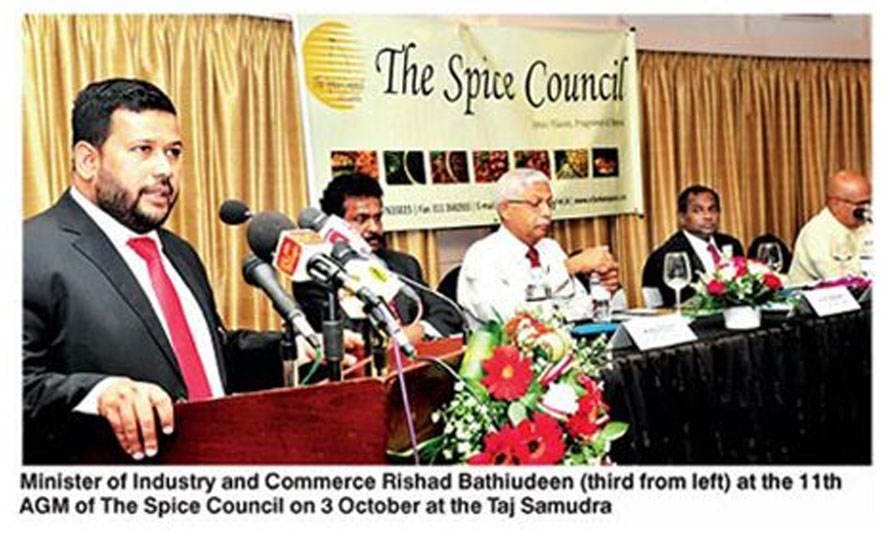 With latest January-August export totals, Sri Lanka has clinched 56% of annual export target for 2014 while the spice sector has returned, as revealed on 3 October. Meanwhile, the spice industry is full of praise for the Government for the assistance lent to the sector’s development.

“By end of this August we have already achieved 56% of our annual national export target for year 2013. Thanks to you, the committed spice and other product exporters, we are able to move towards our overall $ 20 b target now,” said Minister of Industry and Commerce Rishad Bathiudeen on 3 October in Colombo.

The AGM featured many speeches, analyses and presentations of the sector by members of the spice industry.

“The strong performance of minor export crops has returned in 2103 after a decline in 2012. The production of cinnamon, pepper, cloves, cocoa, etc recorded a growth in 2013,” said Bathiudeen. “Even cashew production has increased in 2013, helping our exports. Spices are also the biggest item in our overall six-item basket of ‘export crops’; 45% of the $ 315 m export crop values in 2013 was claimed by spice exports. I am pleased to inform you that the 2014 January-July spice exports stood at $ 143 m.

Commenting further, Bathiudeen said: “When it comes to exports I am pleased to say that according to the latest provisional data by EDB, January to August 2014 exports have increased by 14.03% to $7.34 b, in comparison to 2013 January-August exports. Even provisional monthly exports for August 2014, have increased by 2.4% to $ 978 m from July 2014’s $955 m. What this means is that, by end of this August, we have already achieved 56% of our annual national export target for year 2013. Thanks to you, the committed spice and other product exporters, and industry representatives, we are able to move towards our overall target of $ 20 b exports by 2020, under the committed vision of President Mahinda Rajapaksa.

“There is no doubt, that Ceylon spices have strong potential in the global premium markets. In view of this, My Ministry has, taken many important initiatives, to enhance the spice sector. Firstly, at a cost of $ 42,000, we have enlisted 28 companies, including several spice companies, and are supporting them to obtain, ISO 22000 certification within this year. The full certification, charges for, every selected company, will be paid by us. Secondly, we also submitted a proposal to the value of $153,000 to the Treasury to support, Spice industry value addition, for medium scale spice industries of Sri Lanka starting 2015. Thirdly, the important project ‘Enhancing the cinnamon value chain in Sri Lanka’ implemented through the Spice Council at a cost of, $ 830,000, with support of WTO, this project is one of the biggest projects by us to upgrade Sri Lanka’s spice industry. It will facilitate the industry to obtain ISO 22000, and HACCP certifications.

“In addition, the project will support the EDB to protect the national Pure Ceylon Cinnamon trademark through a Geographic Indication scheme in the international markets. We thank the WTO for this support. The Spice Council’s vision is to make Sri Lanka to be within the top five branded and value added Spices and Allied Product marketers in the world. I am pleased to say that not only the Spice Council but all line Ministries, agencies, and the industry too call for the same and we extend our maximum support in this regard.”

Sri Lanka’s total spice exports which stood at $115 m in 2009 tripled to $329 m by 2013.
Addressing the session, Immediate Past President and founder Chairman of the Spice Council of Sri Lanka Sarada De Silva said: “From 2008-2013, the spice sector has been growing by 3% per annum and its value added sub-sectors such as oleoresins, cinnamon oils are growing by as much as 15% annually. Here lies the opportunity for us! Value addition and planning is the way forward for this sector. We branded our cinnamon with the launch of the Lion Logo by President Mahinda Rajapaksa. The industry looks forward to GI Indication of Cinnamon in the EU. Minister Bathiudeen, your Ministry, along with the EDB and Secretary Anura Siriwardene, are working hard for the development of this sector for which we express our thanks and also pledge our fullest support.”

Announcing his intentions to retire, Sarada De Silva said: “On a very personal note, I have been involved in the spice sector in general and in cinnamon industry in particular, for the last 40 years. I am retiring from all day-to-day activities and executive duties. I believe that I have earned my well-deserved rest.”