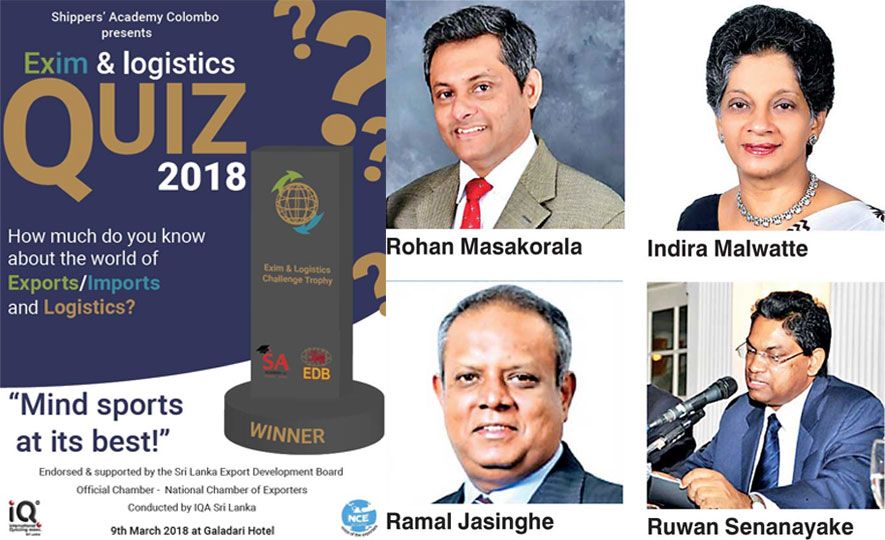 The Shippers’ Academy Colombo (SAC) in association with the Sri Lanka Export Development Board (EDB) has launched a new corporate quiz for the ExIm & Logistics Trophy for the first time.

In the past, for over 8 years, the Shippers’ Academy Colombo introduced high quality corporate quizzes to the Sri Lankan industry. In fact SAC is the only organisation that brought in international teams from the Central Banks of the region when it inaugurated the Governor’s Challenge Trophy with the Central Bank of Sri Lanka. Subsequently the Terminal Operators’ Cup in association with the terminals of Colombo was launched.

The ExIm & Logistics Trophy is the third such quiz focused on the development of the export and logistics industry of Sri Lanka, where international trade related companies and service providers will compete for this prestigious trophy which is awarded together with the Sri Lanka Export Development Board.

The corporate quiz will be conducted by the Shippers’ Academy Colombo’s partner International Quizzing Association Sri Lanka, with Ruwan Senanayake being the quiz master. The event will be held on 9 March at the Galadari Hotel from 2.30pm, with over 40 teams expected to take part in this inaugural challenge trophy.

Speaking about this event, Shippers’ Academy Colombo CEO Rohan Masakorala said that participants will be from export companies as well as importers who are doing entrepôt trade as well as value addition for exports and servicing the domestic market. Also, banks, public institutions, and schools will be taking part among other stakeholders. The quiz will be joined by logistic service providers, terminals, etc. SAC is the pioneering institute that introduced quizzing on international trade, shipping & logistics, said Masakorala, who went on to say that this capacity-building event is not only about winning but is all about networking and meeting the industry and the public sector.

The importance of this particular capacity building exercise is significant this year as the EDB has taken new initiatives to promote the export, entrepôt & logistics industry, under the leadership of Indira Malwatte.

Malwatte was particularly keen to expand this corporate quiz, with a special trophy to schools in order to plant the seed of importance of exports at school level. Hence there will be a special trophy for the school sector for this year’s event. Malwatte has many times remarked that the National Export Strategy (NES) which has been nearly completed needs to expand capacity-building as one of the tools to promote and give an understanding of the development of exports and its core service of logistics across the trade.

In addition to the EDB, National Chamber of Exporters (NCE) has endorsed the event and NCE President Ramal Jasinghe and Secretary General Shiham Marikkar have strongly backed this initiative organised by the Shippers’ Academy Colombo. The NCE as a chamber will be participating with a team.

The ExIm & Logistics Trophy capacity building competition will offer over rupees half a million worth of prizes & gifts for the 2018 event. This high profile corporate event will be followed by a networking session and dinner for all the participants.