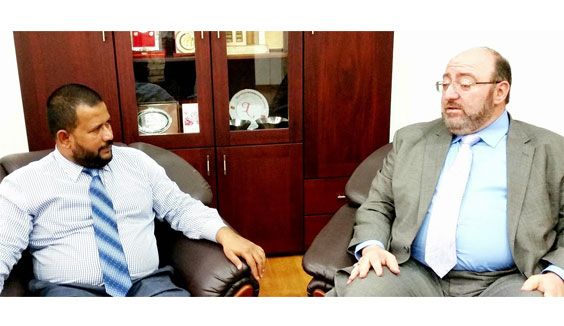 For the first time, Syrian investors' view on trading and investing in Sri Lanka has been revealed in a first-hand account on 13 August in Colombo. And the cash rich Syrians want to set up active projects first, rather than sending a stream of hot funds.

“As countries, Gulf economies are richer than Syria but when it comes to individual countries’ private capital volumes, everyone knows that Syrians are way ahead and much more liquid than private capital in Gulf region. The main issue now is that the Syrian industrial community is on the lookout for an investment hub due to the current unrest in Syria. There are a few keen big investors who are studying Sri Lanka closely” said an upbeat Dr Mhd. Moussallam Al Droubi (CEO of Al Droubi Group and the Hon Consul of Sri Lanka in Damascus, Syria) on 13 August in Colombo.

“Once Syria recovers from the current problems, our bilateral cooperation could be resumed in better shape. The main issue now is that the Syrian industrial community is on the lookout for an investment hub due to the current unrest in Syria. I am looking forward to bring a Syrian business and investment delegation to Sri Lanka in the coming months to explore investment opportunities in Sri Lanka” said Al Droubi CEO Dr Mhd. Moussallam.

He added: “Sri Lanka’s wonderful investment environment is an invitation to them. Most of large scale Syrian industrialists and investors are not necessarily and specially looking at Sri Lanka but they are looking at Asia as a whole. But there are a few keen big investors who are studying Sri Lanka closely. They are some diversified conglomerates including my Al Droubi group as well as investors in such sectors as tourism / hoteliers, chemicals, multi cycle power projects, cables and textiles. My Aldroubi Group itself in turn is representing such multinationals as Saudi Cable, South Korean conglomerate Hyosung Corp, India’s Jindal, the Greece metal firm METKA, China’s global power transmission giant Zhejian HOLLEY, and also Italy’s Gruppo Aturia. We, the Al Groubi, have the biggest cable factory in Syria and other international projects in UK, China, Greece and Korea. About 70% of high end Syrian industries have shifted their investments out of Syria due to the current conflict-though small businesses and sectors still continue there. These shifting industrialists and investors are not mere safe haven seekers busily fleeing Damascus and Aleppo-in fact they are high end investors with critical knowhow in their heavy industry sectors that will benefit the Sri Lankan Industry base! “

Al Droubi CEO Dr Mhd. Moussallam also said, “What many do not know is that Syrian investors have more cash and funds than Gulf region investors. As countries, Gulf economies are richer than Syria but when it comes to individual countries’ private capital volumes, everyone knows that Syrians are way ahead and much more liquid than private capital in Gulf Region (Bahrain, Kuwait, Oman, Qatar, Saudi Arabia, United Arab Emirates). But remember-when investing overseas, Syrian private capital’s priority is to bring the manufacturing project setup and knowhow rather than immediate cash at first. In fact, Syrian investors already have checked out the Gulf countries and even Egypt. They rarely venture out of Gulf region. This is the first time that they are looking at outside the region, and at Sri Lanka specifically. In Lebanese banks alone funds of Syrian business origin to the tune of $14 Bn are ready and waiting at this moment to flow to the correct investment opportunity in any international market-including Sri Lanka. Many high rise buildings in Lebanon’s Beirut Central District are occupied and rented by none-other than Syrian businesses. A building construction boom in Lebanese real estate sector is partly fuelled by Syrian investments. These funds may not be directly injected here immediately but would come as BOO (Build Own Operate) projects. Since they come as total BOOs, the specialized infrastructure would be totally shipped in and that free flow of specialized knowhow is Sri Lanka’s key gain."

"The money would follow after this initial infrastructure transfer as and when needed. Syrian businesses and investors are successful professional investors with a track record and they have long standing investments spanning Gulf, even Egypt and Morocco. For centuries Syrians have been known to be good traders, and creative industrialists. For example 55 pharmaceutical factories in Syria are exporting to 85 countries- among them are demanding markets such as Saudi Arabia. Pharma is not an easy industry and not easy to export-its very complicated specially in quality.”

He further added, “ But Syrian pharma is very active and thriving facing all these challenges! And our textile industry is historically reputed with parts of British Queen’s and Princess Diana’s wardrobe material always originating from Syria. Due to the on-going war, the Syrians are looking for new destinations to continue to produce these renowned Syrian brands elsewhere and this is a good opportunity for Sri Lanka to be a part of the supply chain of such historic Syrian industries and draw in their investments. If suitable projects are found for them here and they are satisfied of the incentives, then they would be entering. My goal is to bring many successful Syrian global investors-not only my Group. If Syrian investments are coming here, then you could expect the bulk originating from Lebanon as I just said-these are clean investor monies with clear and direct legal sources of origin. More importantly, if my Al Droubi or any Syrian investors come here it will be the first time that Syrian investors would positively go beyond the Gulf region! But you need to show good reason as to why they should be entering here in addition to 100% investment ownership and total profit repatriation benefits offered by Sri Lanka. The Damascus investors looking at Sri Lanka told me that they need to be clearly informed as to what they will specifically be entitled to if they invest here.”

Minister Bathiudeen said: “Our government and all people of Sri Lanka too wish that the issues in Syria would be peacefully resolved. We welcome Syrian investors to Sri Lanka and thanks to HE the President Mahinda Rajapaksa’s committed vision we expect a GDP growth of 7.8% which is positively taken by global investors. And global investors can avail themselves of such benefits as not only the freedom of total investment ownership, but even profit repatriation and constitutional protection for their investments. Syrian BOO projects can strengthen our industrial base considerably. Our industries would specially welcome transfer of global experience and knowhow to them.”