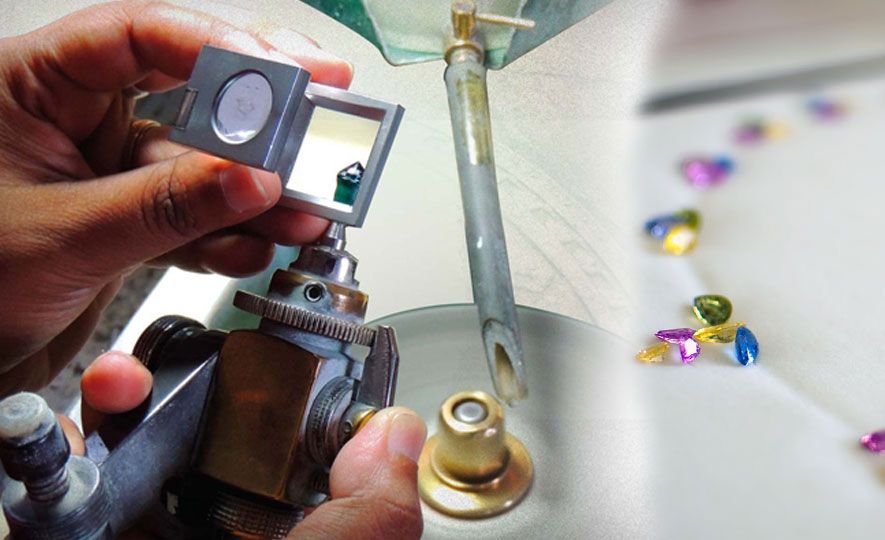 Sri Lanka has been well known as a high-quality cutting and polishing destination with competitive pricing and still maintains a reputation as one of the best cutting centres for service cutting in the world. Sri Lanka’s lapidary sector consists of cutting and polishing of diamonds and coloured gem stones and the industry plays a vital role in adding value to locally produced and imported gem stones. The value addition per carat in the calibrated stone industry is estimated to vary between 25-30% for imported stones and 40-100% for local stones.

Sri Lankan lapidarists have a high degree of skills in orienting rough gemstones to achieve the best face-up colour while retaining the weight. At present, Sri Lankan lapidaries are using latest and state of art technology and machinery for calibrating, sawing and performance efficiency.

Adoption of such technologies together with the natural flair for gemstone faceting traditionally inherent within the Sri Lankan gem cutters has catalysed Sri Lanka as one of the world’s best source in free size, calibrated and precision of coloured gemstones and diamonds.

Sri Lankan lapidarists are not only specialised for free size and precision cutting but has capability in producing stones as small as 1/3 of a millimetre with zero or very low tolerance according to technical drawings supplied by the customers. At present, Sri Lankan lapidaries are catering to a highly prestigious clientele in the watch and jewellery industry including Rolex, Mont Blanc, Bvlgari, Cartier, Tiffany & Co., etc.

It is estimated that there are around 20,000 gem cutters and 80 lapidaries in Sri Lanka and the annual foreign exchange generates by the industry is approx. $ 1.5 to 2.0 million and 90% of the business is generated from US and EU at present.

EDB is working closely with the industry in developing and promoting the sector and facilitating with issues faced by them. An informative website dedicated to the lapidary industry has been developed and up and running at present and also the sector is being promoted in industry specific international magazines.

The sector cuts and polishes a large number of rough gemstones that are imported for service cutting and re-exported. These imported gemstone parcels are subject to Nation Building Tax (NBT) and which is levied on the total value of the rough stones.

As the Sri Lankan lapidarists earn only for service cutting and therefore, paying NBT on the total value of the rough gem parcels has drastically affected their profitability. This has resulted in Sri Lanka lapidarists mainly attracting low value stones for service cutting, while losing out on the more skilled and better paying higher value business opportunities to our competitors. As a result the country’s potential opportunities are being enjoyed by the regional competitors.

EDB and the industry has discussed this issue with the relevant Government Authorities and the Government has taken steps to address this issue in the National Budget 2018, recommending the removal of NBT on import of gem stones for service cutting and re-exported. The Ministry of Finance and Mass Media will make arrangements to issue the Gazette notification in this regard in the near future.

This will be a huge impetus to the industry in obtaining large order for cutting and polishing and increase the foreign exchange revenues and boost employment in the Sri Lankan lapidary sector.