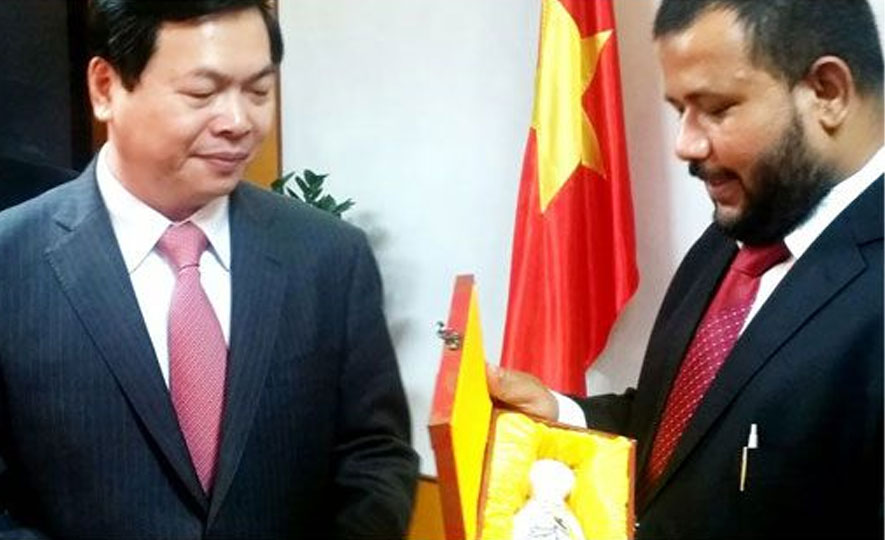 The first ever Sri Lanka Vietnam official trade mechanism went live in Hanoi on 21 August. And the new mechanism, according to the Vietnamese side, is the practical way for bigger trade cooperation in the form of an Agreement.

“Today’s new beginning will open many new opportunities for both countries. I am fully convinced that setting up of a Joint Working Group (JWG) or Joint Trade Sub Committee, would lay a concrete foundation to enhance the existing bilateral trade and economic relations new heights. My Ministry would closely monitor the progress” said n Rishad Bathiudeen (Minister of Industry and Commerce of Sri Lanka) at the Head Quarters of Ministry of Industry and Trade of Vietnam, Hanoi on 21 August.

Minister Bathiudeen, who made an in-depth and lengthy submission, was addressing the opening session of the bilateral discussions to establish the first Joint Trade Sub Committee (JTSC) between the two countries, held at the Head Quarters of Ministry of Industry and Trade of Vietnam, Hoan Kiem District, Hanoi on 21 August.

A six member team led by Minister Bathiudeen is currently in Hanoi for the talks to setup this first official trade mechanism. Along with Minister Bathiudeen in the delegation are RDS Kumararatne (DG-Department of Commerce), and Bandula Egodage (Chairman & CEO-EDB). Also joining the Sri Lankan team is (HE) Ivan Amarasinghe (Sri Lanka’s Ambassador to Vietnam). The seven member Vietnamese official delegation is led by the powerful Minister of Trade and Industry of the Vietnam (HE) Vu Huy Hoang and joined by his top commanders-Nuuyen Phuc Nam (Head of Western Asia Markets), and Qui Hui Son (DG-Vietnam Trade Promotion) as well as Deputy Directors. RDS Kumararatne (DG-Department of Commerce) is leading the technical sessions of the first JTSC in Hanoi.

“We commend and highly appreciate Sri Lanka’s efforts on economic and social development strategies-in that povery alleviation and economic development in the short period after the end of war. We greatly appreciate Lanka’s improvements in Human Development Index rankings, poverty reduction and international economic development as well as policies and direction of Sri Lanka’s economic development strategy under Mahinda Chinthana development framework. Vietnam in fact wants to learn from Sri Lanka about the five hub strategy. These are good lessons for us to apply for the social development of our country as well. Vietnam economy too, similar to Sri Lanka has faced difficulties due to global recession. Despite this Vietnam too managed to reconrd strong GDP growth-in 2013 at 5.32% and in the first seven months of 2014 at 5.5%. Our inflation which was at 6.2% in 2013 fell to a very low 1.45% in the first seven months of 2014! Our total international trade which stood at $ 266 Bn in 2013, expected to rise to $300 Bn. We have managed to bring our poverty household rate to 9% by 2013. Both Sri Lanka and Vietnam have lots of unrealised potential in joint economic cooperation and investments-in that the current trade volumes are modest and not in par with the strong bilateral cooperation that exists between both countries-and there is vast potential for new heights and lets work together. I request Sri Lanka Ministry of Industry and Commerce under Minister Bathiudeen to establish the Joint Sub Committee on Sri Lanka side and work with us. We take note of Sri Lanka’s proposal and engage relevant agencies in Vietnam to for this effort-both sides will continue their exchanges in this regard. The most practical way after establishing the JTSC is to study the possibility of establishing the Preferential Trade Agreement between both countries.”

At the 3rd Meeting of the Joint Commission held in Hanoi in July 2012, an ambitious target was set at for the total value of bilateral trade to reach US$ 01 Billion in the long term, commensurate with the decision taken by the two leaders during the visit of H.E. the President Mahinda Rajapaksa’s to Vietnam in October 2011 to Colombo. At present Vietnam ranks as the 40th export destination and the 23rd supplier, accounting for 0.43% of our total exports and 1.06% of our total imports respectively. The total trade between both countries which stood at US dollars 119.5 Million in 2012 increased to US dollars 224.4 Million in 2013 registering a remarkable growth of 88%. Since 2011, Petrovietnam Oil Corporation (PVOil) has supplied to its Sri Lankan partner with petroleum products. In the field of industry, the two countries have concluded a number of important documents, creating a legal framework for further enhanced cooperation activities. Those documents include: the MOU on Machinery Manufacturing Cooperation between the Ministry of Industry and Trade of Viet Nam and the Ministry of Industry and Commerce of Sri Lanka; the MOU on Oil and Gas Cooperation between the Ministry of Industry and Trade of Viet Nam and Ministry of Industry and Prime Minister’s Secretary Office of Sri Lanka.

“Today’s new beginning will open many new opportunities for both countries” said Minister Bathiudeen, addressing the session, and added: “Sri Lanka being a founder member of the GATT 1994, as well as WTO has been fully committed to liberal and market oriented Economic policies which aimed at achieving greater integration into the world economy. Sri Lanka has been an active participant in the Doha Development Agenda, having tabled, together with other countries, proposals on: technical barriers to trade; geographical indications; labelling of textiles, clothing, footwear, and travel goods; preferences erosion; and trade facilitation. These initiatives and consistency in our economic policies under able leadership of His Excellency Mahinda Rajapaksa, the President of Sri Lanka with his vision for the future under “Mahinda Chinthana” have brought Sri Lanka much closer with the global partners and in particular, with the countries in Asia. “

Sri Lankan Minister said, “The trade objectives within "Mahinda Chintana" also focus on increasing integration of the Sri Lankan economy with global markets. The latest IMF assessment has given a glowing tribute to Sri Lanka’s economic performance. Its July 29th statement says: “Sri Lanka’s economic growth has been one of the fastest among Asia’s developing economies in recent years. After falling to 6.3 percent in 2012, real GDP growth accelerated to 7.3 percent in 2013”. The Free Trade Agreements that Sri Lanka entered into with India (year 2000) and with Pakistan (year 2005) have already become the gateways for the manufacturers and investors in Sri Lanka in accessing the sub-regional market with over 1.6 billion people. Sri Lanka is progressing towards becoming South Asia’s Economic nucleus, through developing 05 hubs namely Aviation, Commercial, Maritime, Energy and Knowledge. In the realm of bilateral relations, Sri Lanka and Vietnam have been enjoying warm and cordial relations over a long period of years and it has been steadily developed based on mutual respect and shared values. In this context, I am pleased to observe that the trade volume between Sri Lanka and Vietnam has been growing at a steady pace in recent years. “

He added, “The total trade between both countries which stood at US dollars 119.5 Million in 2012 increased to US dollars 224.4 Million in 2013 registering a remarkable growth of 88%. These facts signify that there is huge, unrealized trade potential between two countries that we jointly need to exploit. However, there is no mechanism in place between the two countries at the government level, at present, aimed at strengthening existing bilateral trade and commercial relations. I am glad to learn about growth in the Vietnam Economy and in particular the growth in the industrial and high tech sectors. I am also confident that both countries would find many business opportunities which may be complementary to each other. Ton Sinh Thanh, the Vietnamese Ambassador who just returned to your country after his term in Sri Lanka, has been instrumental in further strengthening relations between our two countries. He recently opened a Vietnam Trade Center in Colombo. He is also of the view that possible Free Trade Agreement between the two countries would help to further improve the trade and economic relations. In this context, I am fully convinced that setting up of a Joint Working Group (JWG) or Joint Trade Sub Committee, comprising senior officials from the two countries would lay a concrete foundation to enhance the existing bilateral trade and economic relations new heights. I have no doubts that the deliberations of our technocrats would finalize modalities of the Joint Working Group. My Ministry would closely monitor the progress towards enhanced trade, investment and economic cooperation between our two countries. I am therefore, confident that we may jointly be able to create a trade facilitating environment towards this objective.”