Home/News/India has the most balanced trade with Sri Lanka: Sinha

India has the most balanced trade with Sri Lanka: Sinha 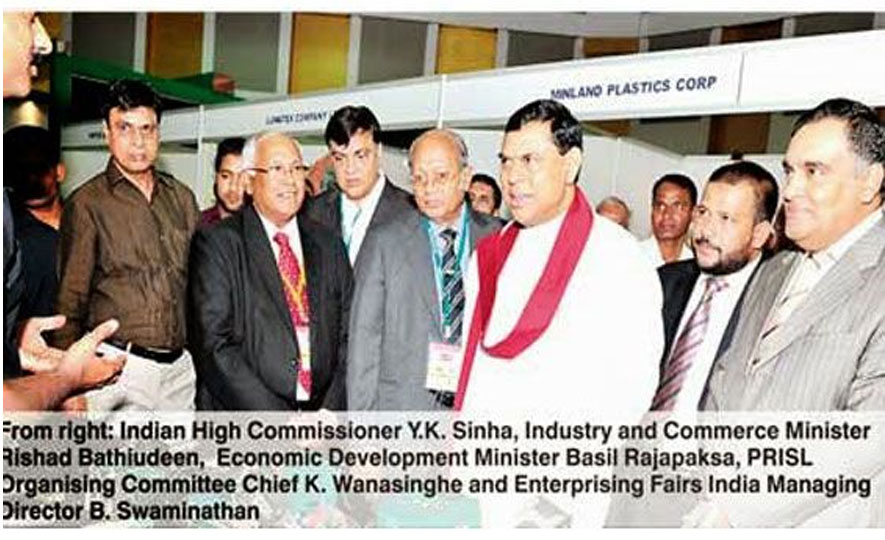 When it comes to global trade parities of the world’s 10th largest economy, the most balanced trade it conducts is with Sri Lanka, India claimed yesterday.

“India has the most balanced trade with Sri Lanka among its major trade partners. Both sides are involved in continuing discussions to take economic engagement to the next level,” said Indian High Commi-ssioner in Sri Lanka Y.K. Sinha yesterday.

“The participation of more than 100 companies in this event is a manifestation of the re-emergence and diversification of the Sri Lankan economy,” said Sinha. “India and Sri Lanka enjoy robust economic and commercial relations exemplified by the 14-year Free Trade Agreement. India is not only the largest source of imports for Sri Lanka but also Sri Lanka’s third largest export destination after the USA and the UK.”
Sinha asserted that bilateral investments with Sri Lanka have also witnessed a substantial increase in recent times. “Based on the national synergies and complementarities between both countries, both sides are involved in continuing discussions to take economic engagement to the next level. I am certain that Sri Lanka Plast 2014 will contribute to further consolidation of economic engagement between India and Sri Lanka,” he added.

India is a well-known member of BRICS as well as a major economy within the G20 grouping. Indian investment flows to Sri Lanka in 2012 stood at $ 158.20 m. According to the EDB, Sri Lanka’s top three exports to India in 2013 were boats, animal feed and pepper.

Bathiudeen, addressing the event, said: “Plastics and rubbers are two sectors that play a huge role in our everyday lives as well as in our GDP. In 2013, our natural rubber exports stood at $ 71.6 million. Rubber product exports alone in 2013 stood at strong $ 887 million, rising by 4% from 2012’s $ 856 million. Our plastic exports only have stood at $ 60.11 m, increasing by 5% from $ 57 million in 2012. I should stress that we are strongly encouraging value addition for our rubber exports. I should also stress that these two sectors have been rightly identified as thrust industries, which are expected to contribute significantly to national economic growth to meet our planned 7.8% GDP target this year under the vision of President Mahinda Rajapaksa.”

On behalf of the organisers, Enterprising Fairs India Managing Director B. Swaminathan said: “We are happy to bring in the second edition of Sri Lanka Plast and the debut editions of the RUBEXPO and SIMEX. These exhibitions will no doubt create B2B opportunities, enhance collaboration and grant more access to the local export market, enabling a stronger economy aligned with the Sri Lanka 2020 vision.”
There will also be a guidance booth for young and aspiring entrepreneurs who can get direction on how to start a business in the plastics and rubber industry. This expo is set to attract over 20,000 visitors over the three days, according to the organisers.

The reputed Lankan branded footwear maker who was attending the inauguration added: “This event is a good effort to promote our products, even to India, which is a huge market. The cost of transferring products from Delhi to Chennai is more than cost of shipping from Colombo to Chennai, giving Lankan exporters an advantage. There are also some non-tariff barriers at that end and a fair amount of that has been ironed out, helping us Lankan exporters. We can further improve and there is space for it. Our exporters need to vigorously go for the Indian market just as Indian exporters do here.”

In 2013, India ranked at 10th among importers of Lankan rubber finished products, importing $ 19 m of rubber products from Sri Lanka.