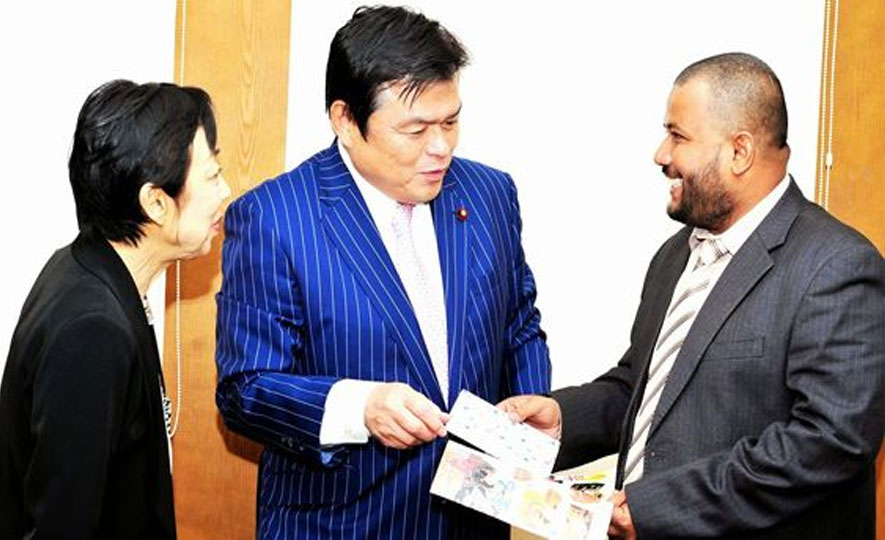 As Sri Lanka-Japan bilateral trade jumped $890 Mn and edged to $ 900 Mn mark, a keen Japan signalled towards a Lanka-Japan FTA for the first time-albeit with a qualifier. “In terms of country risk and future potential, I believe Sri Lanka is quite promising. We consider that FTA and EPAs as very useful means to promote trade. Mere conclusion of FTAs alone is not sufficient for better trade however. What is important is to develop a very robust foundation here” said a confident Kazuyoshi Akaba, the visiting Japanese Senior Vice Minister of Economy, Trade & Industry (METI) on 28 July in Colombo.

Japanese Minister Akaba- who graduated from Faculty of Law, Keio University and who once worked with Japanese multinational Mitsui’s Beijing station as a Senior Corporate Exec-is the first Cabinet ranked METI Minister to visit Sri Lanka after two decades and is accompanying a six member Japanese team to Colombo. It is the second time that Akaba is in Sri Lanka-his first visit being 30 years ago.

According to the Department of Commerce of Sri Lanka (DoCSL), Japan is the 9th largest export destination for Sri Lanka’s exports with a share of 2%. As for imports, Japan ranks at 6th supplying 4% of Sri Lanka’s total imports. The Department of Commerce of Sri Lanka has initiated the Economic Partnership Agreement between Japan & Sri Lanka this year in collaboration with METI. Two preparatory meetings were already held in this regard with the relevant line Ministries and proposals also have been obtained. The top three Lankan exports to Japan in 2013 were tea (22%), apparel (17%), and seafood (17%). 52% of 2013 imports bill from Japan was spent for motor vehicles.

“In terms of country risk and future potential, I believe Sri Lanka is quite promising. We consider that FTA (Free Trade Agreement) and Economic Partnership Agreement as very useful means to promote trade. Mere conclusion of FTAs alone is not sufficient for better trade however. What is important is to develop a very robust foundation here-foremost, the necessary infrastructure and to also an investor friendly environment; these will lead to conclusion of FTA and EPA with Sri Lanka in future” ” said a confident Japanese Minister Akaba and added: “We concluded many FTAs with our trade partners. There have been many FTA successes and failures for us. As for Sri Lanka, let’s do whatever we can and I am hopeful that we can jointly go for win-win relationship.”

Addressing Minister Akaba, Minister Bathiudeen said: “Sri Lanka is expecting a GDP growth rate of 7.5% this year. The total trade with Japan which stood at US$ 566 Mn in 2004 increased by 58% to $894 Mn in 2013. In 2013 exports to Japan stood at $224 Mn, showing 4% increase from 2012 export levels. We already have FTAs with India, Pakistan and discussions are under way for FTA with China. Sri Lanka wishes to considerably expand trade and economic cooperation with Japan and it is time for a Free Trade Agreement between the two countries. We welcome Japanese engagement towards our five hub strategy for mutual benefits. Sri Lanka is also keen on receiving strong trade delegations from Japan. We specially invite Japanese investors to our apparels, ceramics, light engineering, leather products, food processing, leather products and tourism. Already 141 Japanese business enterprises are active in Sri Lanka.”

According to the BoI, at present, there are about 60 enterprises with Japanese investment alone are operating in Sri Lanka under the section 17 of the BOI Law. As of December 2013, they have invested about US$ 325 Mn, providing about 10,000 employment opportunities for the Lankan community. In 2013, Japanese FDI inflows to Sri Lanka stood at $ 37.62 Mn. Japanese Investors already benefit from the Double Tax Relief Agreement and the Bilateral Investment Protection Agreement signed between Sri Lanka & Japan.

“We attach great significance to Sri Lanka as the Hub of the Indian Ocean. We predict that Indian Oceanic IORAC ARC region to be a strong export market for Japan-receiving 16% of its total exports by 2040, and therefore Sri Lanka is firmly in our view as a hub” responded Japanese Minister Akaba, and added: “We realised that Sri Lankan business climate to be better than we expected. Therefore for Japanese investors, Sri Lanka offers medium to long term prospects. But Sri Lanka have some work to do-needs to overcome shortage of skills in its manufacturing, needs to re-introduce business visa for Japanese businesses, and mitigate higher electricity tariffs so that Japanese investors, instead of moving to Vietnam, Indonesia and Thailand, can seriously pay attention to this country. Better electricity tariffs are vital for Japanese manufacturers since 88% of our power generation costs are due to thermal power and more importantly, in the aftermath of 2102 Fukushima issue, we are now paying J-Yen 3.6 Trillion more for our energy needs. Still, Japanese coal power technology is one of the best in the World.”

Responding to Japanese Minister Akaba, Minister Bathiudeen said: “Thanks to the industrial vision of HE the President Mahinda Rajapaksa, we are providing electricity to industries at a concessionary rate so that they do not face huge cost pressures. A new power generation facility, the Sampur power project, too is now on the cards. I invite Japanese investors to invest with us and to make use of these additional facilities as well.”