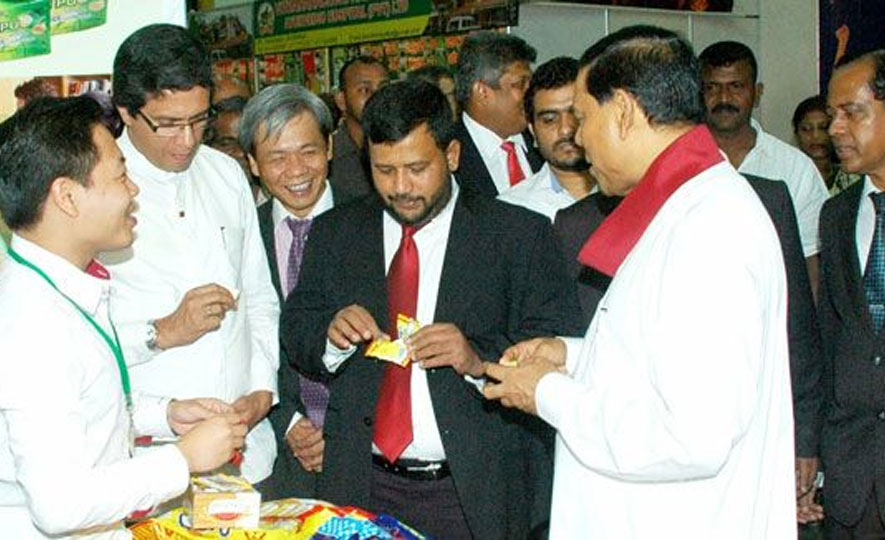 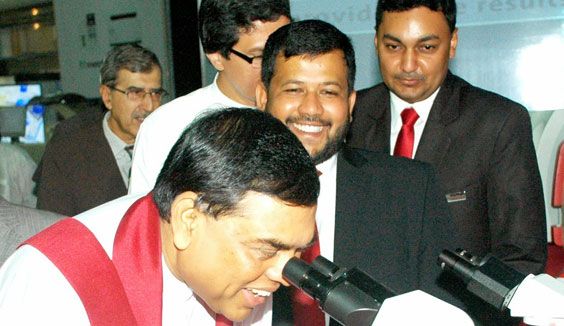 Minister Bathiudeen was addressing the simultaneous launch event of AROGYA 2014 and INTRAD 2014 at BMICH on 16 May. The twin expo is scheduled to continue through 18th May. The AROGYA series of exhibitions were introduced by the National Chamber of Commerce of Sri Lanka in partnership with the Ministry of Health and features indigenous medicinal products and services. As for INTRAD, this year’s is the eighth in the INTRAD series. Attending the twin expo were delegations and participants from Vietnam, Thailand, India, Maldives and China. Also present on the occasion were Economic Development Minister Basil Rajapaksa, Deputy Minister of Health Lalith Dissanayake, and Sunil Wijesinha (President National Chamber of Commerce) as well as representatives from the diplomatic community in Colombo. This is the first time that the twin events are held at once.

“Already a Sri Lankan Ayurveda product brand has earned global reputation with its treatment centres being located in Europe. Today’s Arogya also takes place along with good news for this industry. I am given to understand that Japanese travel sector has shown stronger interest in Sri Lanka’s Ayurveda tourism. Last week a Japanese Member of Parliament touring Sri Lanka also has expressed of Japan’s interest in Sri Lanka’s Ayurvedic care for Japanese medical tourists. Our tourism sector reported more than 1.2 million arrivals in 2013. I wish to commend the Economic Development Minister Basil Rajapaksa for this growth” said Minister Bathiudeen and added: “Since medical tourism is at the middle of several sectors such as tourism, healthcare and inbound travel packaging, we believe that Public Private Partnerships are a good way to strengthen this promising sector so that our government’s goals in tourism related hub synergies are leveraged well. These twin events have been, gaining gradual recognition, among our business community, as successful networking events, in Colombo. With only a per capita healthcare expenditure of $ 175, at first Sri Lanka does not appear to have an advanced healthcare infrastructure similar to the developed countries. However, this does not show us the full picture. Due to the support of well-trained, high quality healthcare professionals we are witnessing the emergence of a new sector-that is medical tourism. Studies show that around 15% of patients in Sri Lanka are foreign patients, such as from Maldives. I am pleased to say that two healthcare companies already have active programs for foreign medical tourists. In fact the Export Development Board under my Ministry, which is also partnering for INTRAD and Arogya, believes that medical tourism is a promising service sector to drive our foreign exchange earnings. Developing a strong identity in medical tourism in western and Ayurveda can result in a special tourism brand for Sri Lanka in the long term. I am given to understand that INTRAD is a wide ranging exhibition including industries, imports and even exports. As the Minister in charge of exports I commend your efforts to promote our exports through this series. In fact I am pleased to share the good news with you on our exports. In that, the encouraging news is that we have identified 16% provisional export growth in the first quarter of this year from January to March, compared to last year’s January-March exports. Accordingly this year’s first quarter provisional exports totalled $ 2.80 Bn while the comparative 2013 first quarter total exports stood at $ 2.36 Bn, showing a 15.7% quarterly growth. This year’s first quarter provisional export growths is led by fisheries, agricultural and industrial exports. The increase in provisional exports only for the month of March this year is a strong 27% from February exports. This year’s March only exports totalled to a record $ 1.06 Bn. These strong growth rates are reported at a time when we target national exports goal of $ 20 Bn by 2020 under the committed vision of the President Mahinda Rajapaksa.”

Several international participants at the expo expressed that for them, Sri Lanka is a new opening. “Coming here from Vietnam for the first time, we did not know that Sri Lanka market has big such potential for our line of products” said Le Viet Anh (Business Director of Alpha International Food JSC) based in Yen Phong, Vietnam. “We have now decided to find and set up an authorised agent in Colombo to represent us. We are interested in potential joint ventures at distribution level here for our health confectionaries, which are based on tropical fruits.” Business Director Anh’s Alpha International Food is a top confectionary producer in Vietnam reporting annual revenues exceeding US $ 80 Mn.