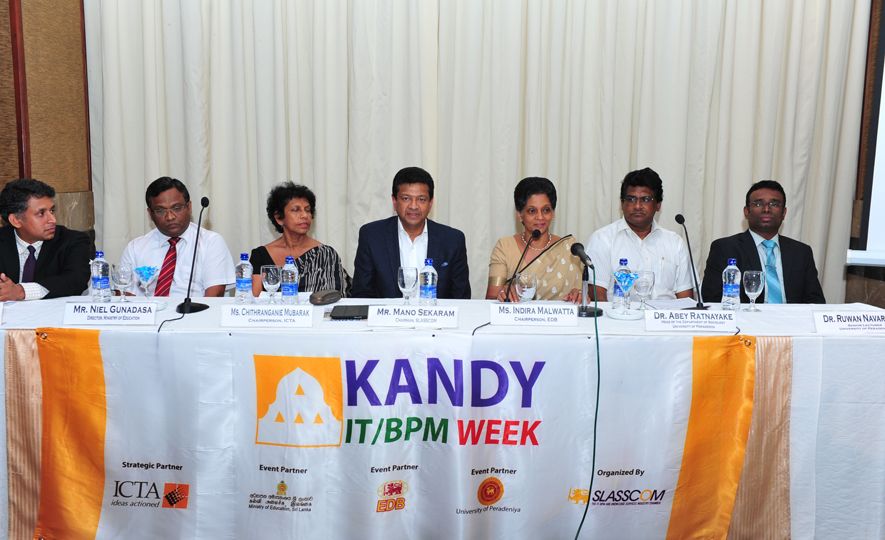 In a move to create a much-needed IT/BPM capacity, the Industry is advocating the creation of regional cities and bring about inclusive growth in the country. Kandy IT/BPM Week is one such initiative, which will be held from10th to 12th of June 2016, organized by SLASSCOM, supported by the Export Development Board (EDB), Information and Communication Technology Agency of Sri Lanka (ICTA) and the Ministry of Education (MOE).

This initiative will consist of five programs each focusing on target audiences varying from school children, exporters, entrepreneurs and university students. The Kandy IT/BPM Week will be held from 10TH -12TH June, it will comprise of the Future Careers Program on 10th June at Ranabima Royal College where the aim is to educate school children about the global and local IT/BPM industry, creating awareness on the wide range of job opportunities available within the sector. An Export forum and Entrepreneurship workshop is to be held on11thJune at Queens Hotel Kandy, targeting those who already run small and medium scale enterprises, aspiring entrepreneurs and others who are looking to start businesses. A BPM conference will be held at University of Peradeniya for university undergraduates on the same day where presentations and case studies on career potential and developments in the BPM sector will be shared. An IT Conference will be held on 12th June at the Peradeniya University where Sri-Lanka’s ICT industry thought leaders will address undergraduates from the University of Peradeniya and other State universities in Sri Lanka, providing them with a wealth of knowledge about the latest developments in the global and local IT/BPM Industry through practical insights.

Kandy  is  one  of  the  cities  that  has  been identified as  it  has  the  potential  to  be developed as a second tier city given the infrastructure already in place, connectivity, current and planned development. Through the existing network of schools and the University of Peradeniya, Kandy also holds the capacity to generate a skilled workforce, which is a pressing requirement to compete in the global IT/BPM space.

The proliferation of ICT in provincial regions is the fastest way of developing marginalized areas. Growth has been so far concentrated within the Western province – regional hubs need to be created.

The IT/BPM industry can operate from any location, given that a conducive environment and sound infrastructure are in place. 80% of the nation’s current workforce comes from regional areas and this is where our greatest untapped human resources lie as well.

Given Sri Lanka’s development drive, Colombo, which is already home to hundreds of IT/BPM firms, will only get more congested. Increased expenses would mean higher costs of operation for companies.

Commenting on Kandy IT/BPM Week, SLASSCOM Chairman Mano Sekaram said “The creation of ‘second tier cities’ would empower regional economy and would see a paradigm shift from being Colombo-centric to being Regional -centric. Regional people will be able to reap benefits while living in their own households, allowing them to enjoy a far better standard of life” In Sri Lanka, Jaffna, Kandy and  Galle have potential to be developed as second tier cities so far, given the infrastructure already in place, current and planned development, their capacity to generate skilled workforces (through existing schools and universities), etc.