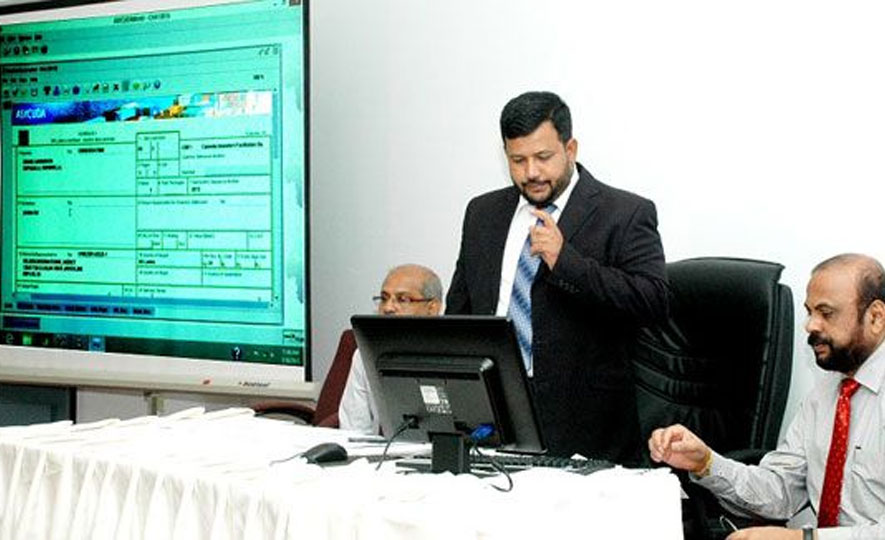 Sri Lanka’s non-BoI apparel exporters have been now integrated to the crucial global network called Asycuda World (of UNCTAD). And having overcome the global recession, our apparel exports are now back on track-with good news. “Today, Sri Lanka’s apparel sector is entering into a new phase.

As a result of Sri Lanka’s non-BoI apparel manufacturers directly integrating into the online ‘Asycuda World’ system, we have now cleared a major bottleneck in our apparel exports” announced Rishad Bathiudeen, Minister of Industry and Commerce on 30 July in Colombo. Minister Bathiudeen was addressing the implementation event of the Asycuda World export documentation system for non-BoI apparel exporters held 30 July at the Ministry of Industry and Commerce.

Also present during the event were Anura Siriwardena (Secretary, Ministry of Industry and Commerce), officials from the Department of Customs, reps from various Chambers, and reps from the apparel exporter community, and textile officials of Minister Bathiudeen’s Ministry, among others. Integration of non-BoI apparel sector to Asycuda World network is expected to save more than 8200 man hours to them, annually.

“Our apparel exporters are joining a global network by UNCTAD in which 85 other countries are already part of” said Minister Bathiudeen, and added: “With our apparel’s entry to Asycuda World, we have now cleared a major bottleneck in our apparel exports. In that, with this integration, our non-BoI apparel manufacturers can successfully eliminate the present manual submission of custom documents (custdocs) and can directly submit custom declarations, to the customs and has become partially paperless. The result is that unnecessary travel time reduced, less bureaucracy, and less document processing by the non-BoI apparel exporters for their every single shipment. In fact, they can now submit customs declarations directly from their factories thereby paying better attention to their manufacturing and increasing apparel exports. Also, the Proposed Shipment Declaration (PSD) documents too will go online in the due course. I thank the Department of Customs for their on-going support in this regard.”

Speaking on apparel exports volumes, Minister Bathiudeen revealed: “I am pleased to say that Sri Lanka’s apparel exports are recovering from the impact of global recession thanks to the economic vision of HE the President Mahinda Rajapaksa. Overall garment exports which ‘include apparels and other woven fabrics’ too, have increased in first half of 2013 by 1.5% to $ 1,994 Mn, in comparison to 2012’s first half which stood at $ 1,964 Mn. This year’s ‘apparel only’ export value totalled $ 1,873 Mn, also at same levels of 2012 first half ‘apparel only’ exports at $ 1874 Mn. In fact, in 2012, our total apparel exports stood at a strong $ 3.77 Billion.”

“This is a great initiative” said MPT Cooray, Secretary General of Joint Apparel Association Forum (JAAF). “Cost is a major factor for us and lowering cost directly impacts our competitiveness. Reduction of transaction costs can help us in a great way. This electronic documentation we have been asking for, is an important step in this process. This new system does exactly that and also saves our time greatly, so that resource costs are also minimised. What we are trying to see in the eventuality is a total paperless system.”