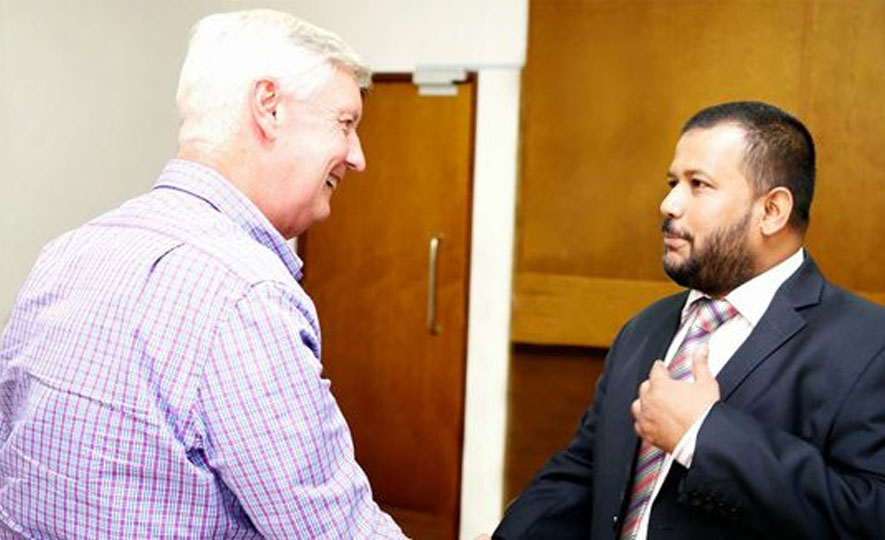 This is even more important for us since we have considerable income from Asia-30% of our turnover from Calvin Klein brand alone originates from Asia!” said Mark Green, the Executive Vice President of Global Supply Chain of New York’s PVH Corporation on 14 August in Colombo.

“Things are going very well with PVH. Recently we opened an office in WTC and reached $80 M business with Sri Lanka” said Executive VP Green, and added: “Since we acquired the global brand Calvin Klein the intimate apparel product line has become very important in our turnover. We are looking at working with Lankan apparel makers MAS, Brandix, Jinadasa, and Hirdramani Group–they are our big suppliers. We want to grow our business here further. Sri Lanka has been best in apparels, particularly intimate apparels in my experience. We source from around the world and one of the things I see is that Sri Lankan apparels is a role model for other countries to study and follow-because when you look at what you have done here in intimate apparels, its remarkable-lean manufacturing model which MAS started is probably a best in the world. Sri Lanka is also considered to be a world expert in apparels manufacturing-in compliance record, CSR and sustainability such as work on carbon neutral factory. When you compare with other apparel producers in the regions, Sri Lanka is way ahead and should be credited for that. PVH is seen as an American corporate but we are in fact Glocal in nature. We are very excited about the forthcoming Lanka-China FTA-having duty free market access to China is very important for us as an apparel sourcing firm and the benefits are great. This is even more important for us since we have considerable income from Asia-30% of our turnover from Calvin Klein brand alone originates from Asia! Having a production centre in Sri Lanka with duty free access to China market is very exciting for us. This is really exciting!”

The New York Stock Exchange (NYSE) listed PVH Corp (or Phillips-Van Heusen) is one of the largest lifestyle apparel companies in the world (and also reportedly the world’s largest shirts provider). Most of its brands are virtually household brands-Calvin Klein, Tommy Hilfiger, Van Heusen, IZOD, Bass, ARROW and Eagle. PVH reported $8.2 Bn in revenues in 2013, exceeding previous projections for 2013. PVC has 2035 stores across the world, 1025 of which are in Europe. PVH’s 2013 revenue projection stands at $8 billion.

Responding to Executive VP Green, Minister Bathiudeen said: “We are aiming for new levels of bilateral trade cooperation with China and under the leadership of HE the President Mahinda Rajapaksa. Sri Lanka-China FTA would create great opportunities for both countries. We have concluded joint feasibility studies on this FTA. Now we have started second round of negotiations. I am pleased to inform you that one of the items we look forward to make duty free in this historic FTA could be apparels! Under the guidance of HE the President Mahinda Rajapaksa, we are aiming to conclude the free trade pact during the forthcoming first ever visit of Chinese Premier to Sri Lanka. There is no doubt that this historic agreement would be a great opportunity not only for PVH but many such global multinationals who want to leverage our strategic hub positioning.”