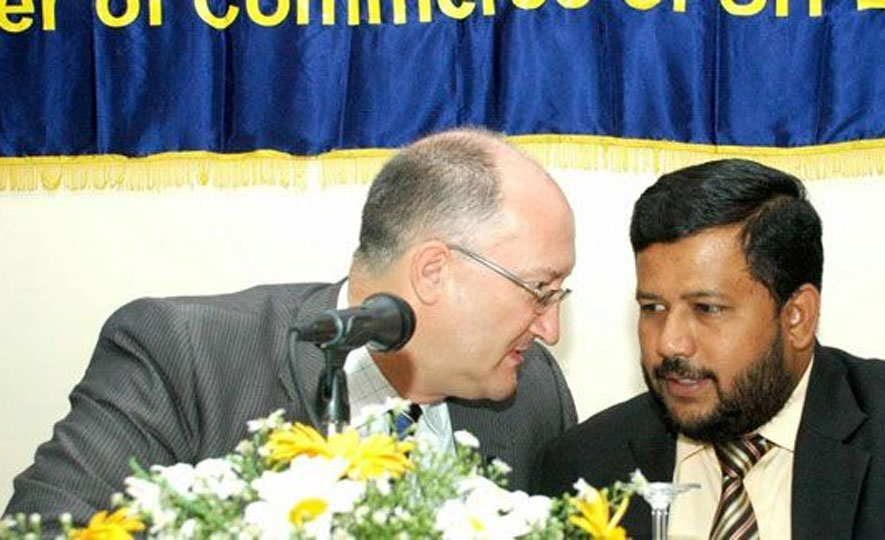 As trade between Sri Lanka and its top global partner EU edged to $ 5 Bn mark, Sri Lanka for the first time revealed its levels of attention to the EU trade dynamics on 07 May. And Europe has commended Sri Lanka's exports value addition efforts as "remarkable."

“Sri Lanka closely monitors the developments in the EU trade policy as it could have significant impact on Sri Lanka’s exports, both directly and indirectly. For example, the recent cross cumulation facility provided for SAARC and ASEAN Regional Groups, would help Sri Lanka to source inputs of ASEAN countries, and be eligible for GSP concessions” said Rishad Bathiudeen, Minister of Industry and Commerce of Sri Lanka on 07 May.

Minister Bathiudeen was addressing the second EU-Sri Lanka Trade Dialogue that commenced at Galadari Hotel, Colombo on 07 May. Organised by the European Chamber of Commerce Sri Lanka (ECCSL), the session, the second in its series since its commencement last year, aims at promoting EU-Sri Lanka bilateral trade further. In this latest session, Sri Lanka, through its Export Development Board, aims at promoting six specific product sectors towards world’s largest trader, the EU.

Reps from Czech Republic, Belgium, Italy, France, Germany, the Indo-German Chamber as well as Sri Lankan officials and exporters were present at 07 May session. Also in attendance was Faiszer Musthapha, the Deputy Minister of Investment Promotion.

“I believe it’s a timely initiative for two reasons” said Minister Batbhiudeen, addressing the event, and added: “Firstly, I am confident that, this initiative will help, to identify potential markets, in the EU for, selected products and services, such as IT-BPO, Agro Food and Beverages, Electronics, Gems and Jewelleries, and Rubber and Plastics, while establishing, business collaborations for, mutual benefits.

“Secondly, Sri Lanka has built an enabling environment for international businesses and you as private representatives, need to get this message across the world to promote Sri Lanka as the business hub in Asia under the vision of His Excellency Mahinda Rajapaksa, our President. The necessary infrastructure towards this objective is being established and is drawing the attention of the business communities from all around the world. EU has been not only a promising market for Sri Lanka, but also a development partner since the signing of the Commercial Cooperation Agreement in 1975, which was replaced with the Cooperation Agreement on Partnership and Development Agreement in 1995 and subsequent establishment of the EU-Sri Lanka Joint Commission. Various projects, including EU-Sri Lanka Development Project providing development assistance, post tsunami reconstruction, and rehabilitation, and humanitarian assistance were significant in this respect.

“As a market, the 28 countries in the EU has emerged as the number one export destination for products of Sri Lanka. In 2013, the total bilateral trade between Sri Lanka and EU, stood at $ 4.9 Bn. Sri Lanka’s total exports to the EU market have increased to $ 3.27 billion, in 2013 from US $ 2.7 Bn, in 2009. Even in the first quarter of this year alone exports to EU increased by 16.3% to $ 896 Mn. Among our imports from EU are machinery chemical and plastic products, woven fabric, and base metal. Sri Lanka continues to, enjoy a favourable, balance of trade with the EU. In 2013, 60% of our exports to EU were apparel. The relationship built on apparel trade has become a strategic partnership with major buyers in the EU.

“Today, Sri Lanka has become a value creator to its strategic partners. This significant development, in our exports to the EU is the growth in our apparel exports despite the loss of GSP plus facility in August, 2010. This certainly demonstrates, our commitments in adding value not only to our business partners but also to the consumers in the EU countries. Sri Lanka closely monitors the developments in the EU trade policy, as it could have significant impact on Sri Lanka’s exports both directly and indirectly. For example, the recent cross cumulating facility provided for SAARC and ASEAN Regional Groups would help Sri Lanka to source inputs of ASEAN countries and be eligible for GSP concessions. Sri Lanka continues to engage with the European Commission for further strengthening its trade and, economic relationship.

“After a period of four years the 18th session of the EU-Sri Lanka Joint Committee meeting was held in Brussels in December 2013. Similarly Sri Lanka closely, collaborated with the European Commission in implementing IUU regulations of fisheries by maintaining regular dialogue. I am confident that, the European Commission would be able to assist Sri Lanka for implementation of Trade Facilitation Agreement which came out as a result of the Bali package concluded at the WTO Ministerial Conference held in Bali Indonesia in December 2013. Sri Lanka is currently processing to obtain Geographical Indication (GI), protection for Ceylon Cinnamon in the EU.

“As you all are aware such GI protection will provide an exclusive identity that will enable Ceylon Cinnamon to fetch a higher position in the international market while supplying its consumers an authentic product. Prior to this initiative Sri Lanka has been able to secure an exclusive classification of Ceylon Cinnamon under a separate HS tariff heading, through the World Customs organisation. I was also informed that your Chamber in collaboration with business dignitaries in the EU has established EU-Sri Lanka Business Council, in February 2010. I would like to stress that my Ministry is ready to extend any possible assistance for such ECCSL initiatives, through our Trade Officers stationed abroad”.

Simon Bell (Director-ECCSL) addressing the event, said: “Sri Lanka’s export value addition has been remarkable and a great success. Often American and European officials are unaware of this. In fact, it’s a little known fact that Sri Lanka exports’ value addition successes in spices, rubber, tea, gems and jewellery are seen as role models by countries from Rwanda to Indonesia.”

Faiszer Musthapha, the Deputy Minister of Investment Promotion, addressing the event, said: “Sri Lanka has slowly set the phase to being recognised as a high value, niche products and service deliverer to the global market. Two key elements-the interest of industry sector to work with the government on a long term strategy, joint collaboration in tech, international trade etc with EU-have helped Sri Lanka to be placed in the global market map. To become a global leader, Sri Lanka needs to look beyond today, and tomorrow-and innovate.”