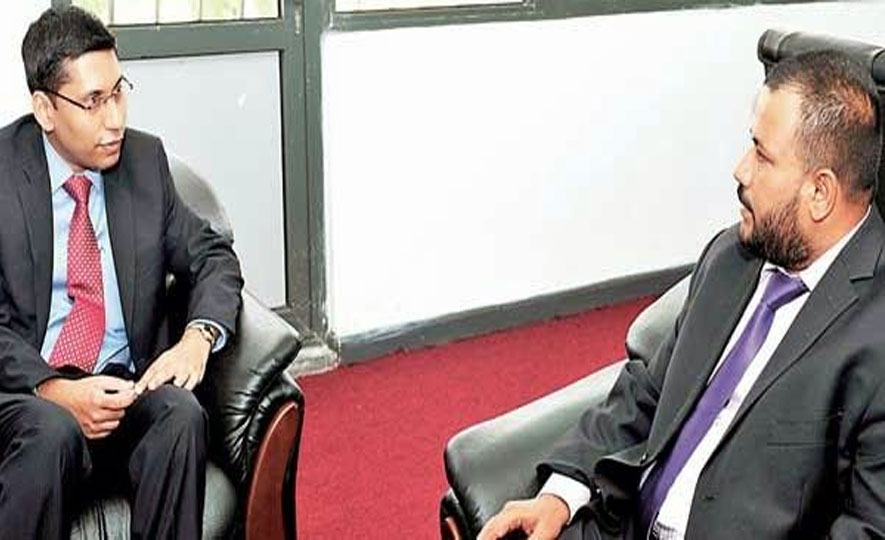 As bilateral free trade leaped by a huge 40%, Sri Lanka’s biggest supplier in the world nodded in agreement on 7 August that a wider and consistent trade harmonisation push could remove existing barriers in one go -and amplify bilateral business.

“Sri Lankan businesses that invested in India have done very well. I agree with you that a wider Mutual Recognition Agreement will be useful to increase bilateral trade. I also agree that the lack of unified market standards across various states in India could be an issue for Lankan exporters,” said a keen Arindam Bagchi (Deputy High Commissioner of India to Sri Lanka) on 7 August in Colombo.
Deputy High Commissioner Bagchi was addressing Minister of Industry and Commerce of Sri Lanka Rishad Bathiudeen on 7 August during the first courtesy call he made on Minister Bathiudeen. Deputy High Commissioner Bagchi previously served in such stations as Beirut, New York, Spain and was finally functioning as the Director of Indian Prime Minister’s Office (PMO) before he arrived in Colombo. Joining Minister Bathiudeen on 7 August were Department of Commerce of Sri Lanka DG R.D.S. Kumararatne and EDB Chairman/CEO Bandula Egodage.

“India’s new government led by Prime Minister Narendra Modi has a special focus on SAARC region. On that note, let’s build on the long standing special relationship between Sri Lanka and India,” said Deputy High Commissioner Bagchi, and added: “As for India’s export problems, they are more or less similar to Sri Lanka’s – if EU market drops, similar to Sri Lanka exports, we too fall. And so is when it comes to exports market diversification. As for the Indo-Sri Lanka Free Trade Agreement (ISFTA), it helped both countries. I also think we can find alternative ways to expand Indo-Lanka trade in addition to the current ISFTA. In fact, now what is important is to expand ISFTA to other trade aspects. When it comes to Indo Lanka trade, the name of the agreement is not important but what is important is how to expand the benefits to other areas of (trade) cooperation. More importantly, Sri Lankan businesses that invested in India have done very well. In fact, we are very happy of their steady progress.”

Responding to Deputy High Commissioner Bagchi, Minister Bathiudeen said: “We extend you a warm welcome to Sri Lanka. It has been a pleasure for me and my Ministry to closely work with the Indian High Commission and relevant Indian Ministries to develop our bilateral trade. It is time for both sides to implement decisions of the Joint Task Force made in Colombo to develop bilateral trade so that mutual benefits are gained. As R.D.S. Kumararatne, my DG of Department of Commerce here informs me that what is now required to speed up Indo-Lanka trade to next levels is a wider and a proper Mutual Recognition Agreement (MRA) on standards. “Lack of such a wider and proper MRA has led to many of Lankan exporters facing issues in India-in that interpretation of trade issues differently at different times, thereby slowing trade progress. For example one day we come across certain accepted measures not acceptable to the other side suddenly. Even if MRA is a long process, if we start it now, one day we will be there! In fact, the biggest barrier we have in terms of process related trade issues is the lack of an MRA. To get the maximum of FTA, we need to develop the confidence of business communities on both sides. A proper MRA, rather than a mere harmonisation agreement, could give us the much needed consistency and resolve current trade issues to a great extent in one go. Therefore I strongly believe it is time to enter to a proper, wider MRA with India.”

Deputy High Commissioner Bagchi responding to Minister Bathiudeen said: “I agree with you that wider Mutual Recognition Agreement will be useful to increase bilateral trade. I also agree that the lack of unified market standards across various states in India could be an issue for keen Lankan exporters to India and needs to be looked into. For example the Indian government’s General Sales Tax (GST), an important domestic tax, has issues in its progress due to it needing the concurrence of all the states where it will be implemented.”

Top Lankan exporters and trade researchers praised Minister Bathiudeen’s 7 August initiative.
“This is a very important development and we welcome it,” said Spice Council of Sri Lanka Founder Chairman Sarada de Silva and added: “This is the kind of thing we too are pushing for, which is even important for value added exports. For instance, when we talk of our spice exports, more than 70% of our cloves, pepper and nutmeg are headed to India. As a start therefore, we welcome a mutual MRA between Indian Standard Institute and Sri Lanka’s Standards Institute (SLS) instead of unilateral agreement at present, which could help our exporters greatly.” Verite Research Head of Economic Research Subhashini Abeysinghe said: “In our experience, an MRA which mutually accepts testing, certification and standard compliance report would be of great benefit to Lankan exporters.”

Both Deputy High Commissioner Bagchi and Minister Bathiudeen also discussed of Indian development assistance to Sri Lanka and other forms of bilateral cooperation between both countries on 7 August.