‘Lanka IT sector to hit $1B mark next year’-EDB 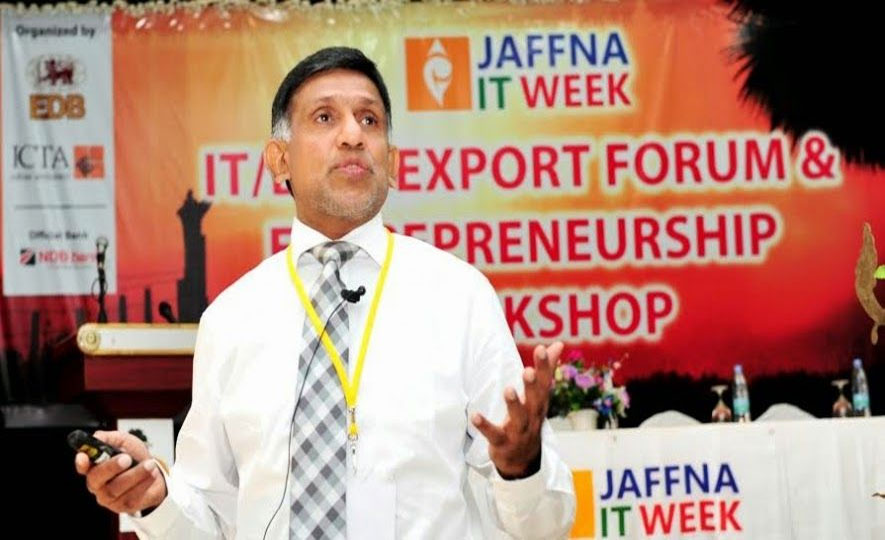 Sri Lanka’s surging IT and BPO exports would hit the critical dollar one billion mark as early as next year, surpassing previous expectations! And London Stock Exchange and HSBC have praised the Lankan IT sector ‘with joy’, as revealed on 05 December in Jaffna. And the pioneering Northern IT Exports forum by EDB & ICTA was packed with enthusiastic regional IT industry.

“We earned $719 Mn from ICT exports, and our projection for 2014 is $820 Mn. At this rate, we expect to hit dollar one billion mark very soon-as early as 2015. We have seen 123% growth in IT sector over the last five years. London Stock Exchange and HSBC also praised the Lankan IT sector with joy” said Saman Maldeni (Director, Export Services of SLEDB) on 05 December in Jaffna.

EDB Director Saman was addressing the pioneering IT/BPM Export Forum & Entrepreneurship Worksop that took place in Jaffna on 05 December at Jaffna’s Tilko City Hotel. The first ever such Forum to be held in Northern Province, it packed 30 ICT operators and 30 would be young entrepreneurs and start-ups and seven leading Lankan IT BPM CEOs. Held on the theme of “Accelerating IT Exports and Fostering Entrepreneurship”, the one day, one-of-a-kind session consisted of presentations from seven Lankan IT firms – Virtusa, Stax Inc, WSO2, Calcey, CodeGen, Hayleys BPO, 99X Technology well as top two public sector agencies ICTA and EDB. Co-organisers of the Forum were EDB and ICTA.

“Sri Lanka’s IT/BPM sector vision 2022 is a $ 5 Bn revenue, 200,000 direct jobs and 1000 start-ups. Northern region has been identified as one of the major regions that can harness its strengths and skills to make this dream a reality” said EDB Director Saman, and added: “Jaffna region’s stress free environment, availability of skills and infrastructure such as internet and electricity are key factors in this regard. National Outsource Association of UK awarded SL the Outsource destination of 2013 which shows the up and coming potential of Lankan IT and business processing sector. In 2013, we earned $719 Mn from ICT exports, and our projection for 2014 is $820 Mn. At this rate, we expect to hit dollar one billion mark very soon-as early as 2015. We have seen 123% growth in IT sector over the last five years. This growth was across all IT/BPM sectors, in domestic and export sectors. A reason for this is our high quality-London Stock Exchange and HSBC also praised the Lankan IT sector with joy. This was due to our high quality software products and services that they received. EDB is not a regulator in Lankan exports but a promoter, supporter, facilitator and mediator operating through a regional network.” 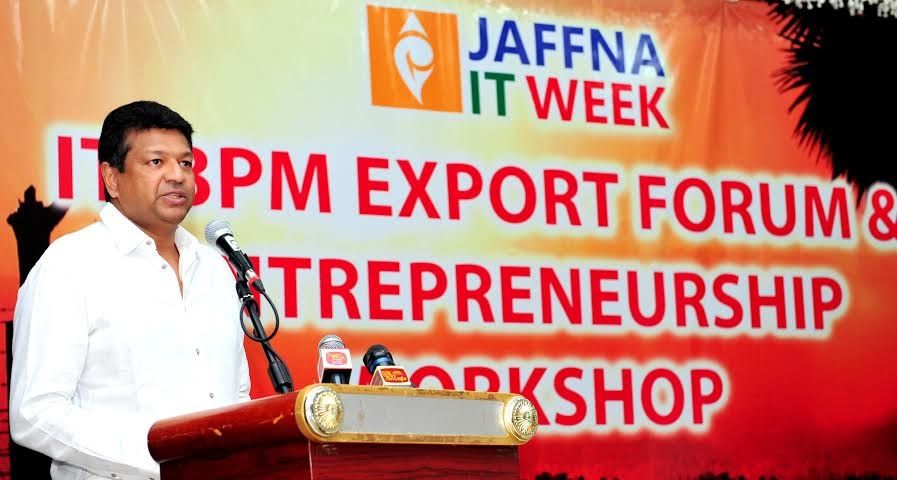 Addressing the event, Mano Sekaram (SLASSCOM Vice Chairman) said: ““Just five years ago, such an event was merely a pipe dream. Today however peace and prosperity is finally the reality we are living in and events like this are not only possibility but happening as we speak. We kicked off the Jaffna IT week two days ago at Vembadi School ,where we shared with the school children who are the future leaders of our country of the career prospects in IT/BPM –this was a successful 2 days in which we had over 2000 children and youth taking part. Sri Lanka’s IT/BPM sector has taken less than 15 years to become the country’s fifth largest exporter. In 2013, export revenue grew to an estimated $ 719Mn, employing 80000 with 220 firms engaged in it. We have an ambitious vision-our 2022 vision of the industry is to be a $5 Billion industry creating 200,000 Jobs. Part of our strategy is to build regional ICT capacity creating 2 tier cities and fostering entrepreneurship to ignite start-ups. Today, the Western Province contributes over 95% of IT/BPM exports. The creation of ‘Second Tier Cities’ –Kandy, Galle and Jaffna-will IT empower the regions and would see a paradigm shift from being Colombo-centric to regional-centric IT development. Furthermore, it has been identified that the proliferation of ICT in provincial regions is the fastest way of developing marginalised areas. Let me thank all the my industry friends , industry leaders /CEO, EDB officials, ICTA colleagues and our sponsors for working tirelessly to put together this even and coming all the way to Jaffna.”

Reshan Devapura (CEO-ICT Agency Sri Lanka), addressing the event, said: “Previously we expected to break $ 1 Billion mark in IT revenue by 2016 or later but now, with latest revenue projections coming in, we are expecting to hit $ one billion revenue by 2015 with 100,000 IT sector employment in ’15.”

EDB has conducted many IT related events, conferences, trade exhibitions, both locally and abroad. It also successfully conducted export coaching programmes for IT sector personnel.