Home/News/Lanka vying for $3B rubber sector

Lanka vying for $3B rubber sector 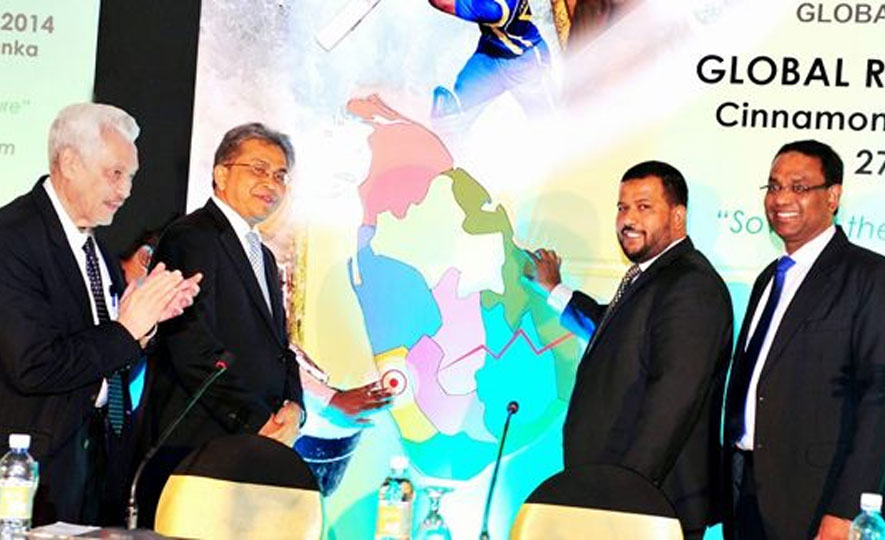 As the first ever Global Rubber Confab to be held in Sri Lanka is announced on 28 August, the country positioned its historic rubber industry to be a $ 3B sector. And a top global rubber body voiced that rubber prices would recover ‘before very long’.

“We are now aiming at an ambitious $3B rubber industry in the coming decade. To arrive at this $3B in a viable manner, it is essential for us to support our rubber farmers. I believe it is time for a long term development plan for this sector. The 2013 rubber exports of $960 Mn is a 100% increase compared to rubber exports five years ago” said a keen Rishad Bathiudeen (Minister of Industry and Commerce of Sri Lanka) on 29 August in Colombo. 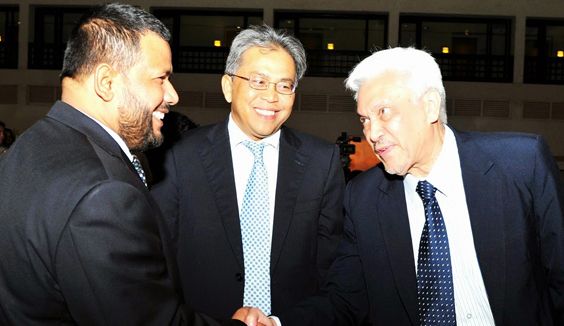 Minister Bathiudeen was addressing the launch event of Global Rubber Conference 2014 to be held in October in Colombo. The first Global Rubber Conference (GRC) ever to be held in Sri Lanka, it is co-organised by the Export Development Board under Minister Bathiudeen as well as Confexhub, Malaysia. GRC, a leading global conference on rubber sector, is held in collaboration with Sri Lanka’s Ministry of Industry and Commerce and Ministry of Plantation Industries, is to provide rubber and rubber products experts and policy makers, captains of industry and serious investors a platform to converge and meet face to face to discuss a wide spectrum of commercial, R&D developments and 2014-’15 price outlook. 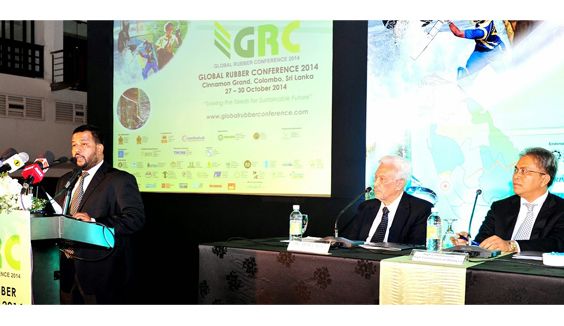 “We know that natural rubber constitutes almost one third of world’s total rubber supply. It is also of great importance to a country like Sri Lanka not only because of its exports but also the employment rates on this sector which is considerable” said Minister Bathiudeen, and added: “As a result, our government, under the vision of HE the President Mahinda Rajapaksa, is now aiming at an ambitious $3B rubber industry in the coming decade. To arrive at this $3B in a viable manner, it is essential for us to support our rubber farmers. 65 percent of the total planted rubber in Sri Lanka are owned by such small farmers. Therefore for Sri Lanka, apart from country’s historic reputation for natural rubber, there is an important “socio-economic” reason to enhance this sector. In order to retain Sri Lanka’s historic reputation as a key player in rubber supply chain and also to overcome rubber industry issues, I believe it is time for a long term development plan for this sector. It would also be useful for us to introduce re-planting assistance. This could be funded by a temporary rubber cess, during times of high earnings from rubber exports. As for exports, I am pleased to say that in 2013, Sri Lanka exported $ 72 Million of natural rubber and another $887 million of rubber finished products. This 2013 total of $ 960 million is a 100% increase compared to rubber exports five years ago in 2009. I am also pleased to inform you that My Ministry has commenced two important initiatives for this sector at a cost of more than $ 46000. The two initiatives are creating the first ever Rubber Industry database and launching the national rubber research census by my Ministry. Our findings from the first national rubber census are interesting. So far we have completed it in Sabaragamuwa and Western provinces. Our development officers have found 203 rubber industries in both provinces. More than 10,000 rubber industry jobs are active in Western province with 815 new jobs being created in 2013. It was also found there is a lack of skilled people in support services such as die and mould design and manufacturing. We found that training is needed to be provided for all job categories in both latex rubber sector and rubber product manufacturing sector. In such a background, I believe that the forthcoming Global Rubber Conference in Colombo will be a great opportunity for our rubber industry to find solutions to these issues and move to the next level. I have no doubts that our industry stakeholders will make the most of this rare opportunity.”

“The rubber research institute of Sri Lanka was the first such in the world established in 1909. I was here when we commemorated first centenary in 2009” said Dr Abdul Aziz (Secretary General of International Rubber Research & Development Board), addressing the event. “So many research is done on this rubber tree. 70% of global rubber production goes to the tyre industry. Rubber is given centre-stage for its contribution to health. What is important is there are nine other species of rubber –we are only working with just one species here. Rubber research institutes are working on this-We are now working to go into Amazon jungle region with permission of Peruvian government to collect the other eight species-sometime next year. So you can imagine the benefits from these new species advantages of disease resistance, planting in marginal areas and new timber. The forthcoming GRC is an opportunity to be aware of latest R&D on this crop. At this moment rubber prices are not so conducive but you know that rubber always bounces back! We hope before very long rubber prices would recover” Dr Aziz said.

Bandula Egodage (Chairman and CEO-EDB), addressing the event said: “Sri Lanka is world’s sixth largest rubber exporter and 8th largest natural rubber producing country in the world. All rubber stakeholders are here today. This form of gathering of stakeholders is the need of the hour for rubber exports of Sri Lanka. Our plantation industry makes raw rubber while manufacturers produce rubber based products. The theme of government is to grow rubber aiming to increase raw rubber production in Sri Lanka. We discourage raw rubber exports. We are not curtailing raw rubber production in Sri Lanka but promoting rubber based exports. We need to go for value addition. We require high tech, foreign expertise, networking, awareness, research and development etc. That’s why EDB accepted Confexhub’s invitation to partner for this event.”