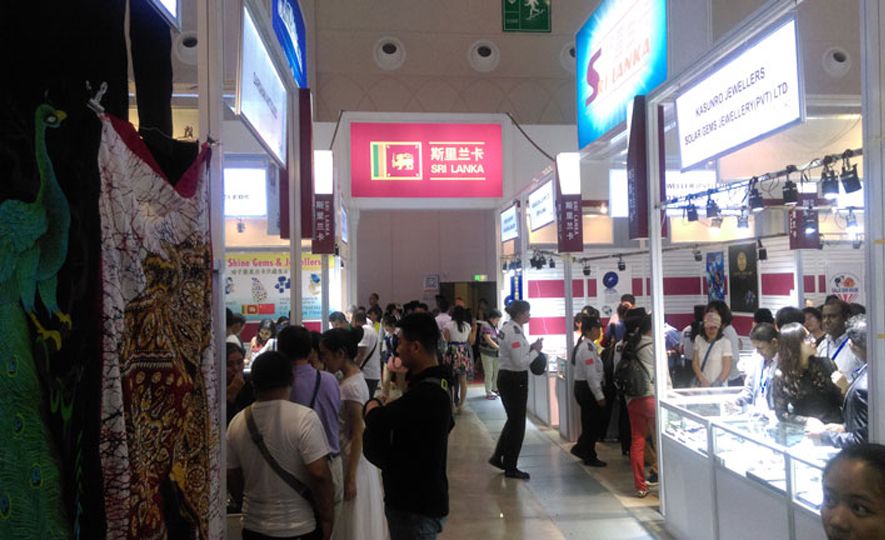 Private sector firms participating in the Sri Lanka Pavilion at the five-day China South Asia Expo in Kunming are upbeat of prospects.

They expressed their confidence to reach more Chinese investors and buyers in a greater way through the event being held at Kunming Dianchi International Convention & Exhibition Centre. This year the Sri Lanka Pavilion has over 120 companies as well as five Government institutions and the participation is facilitated by the Sri Lanka Export Development Board.

Around 440 foreign guests including 36 ministerial-level senior officials, 42 foreign governors and mayors, 28 foreign ambassadors and Consul Generals in China and heads of international organisations were present at the Expo opening.

On Day one which was 12 June, several exhibitors have received good response with a large number of Chinese investors having shown interest to enter the Sri Lankan market. The strongest sector to be represented at Sri Lanka Pavilion is gems and jewellery with 92 companies, followed by 14 handicraft companies and 13 tea firms.

Board of Investment in Sri Lanka Assistant Director Darshana Wettasinghe told the Daily FT that many investors had expressed interest in entering the Sri Lankan market. “On the first day, a large number of Chinese investors visited the Sri Lankan exhibition area,” he said.

He said that some Chinese investors had expressed satisfaction on doing business in Sri Lanka and the facilities given by the Sri Lankan Government. He said during the fair the BOI had taken every measure to reach more Chinese investors in order to further strengthen trade ties between the two nations.

The Sri Lanka Export Development Board was at the fair to facilitate the needs for both Sri Lankan participants as well as investors. EDB Deputy Director (Market Development) Prasanna Jayasinghe told the Daily FT that in the recent past, exports to China have increased several-fold.

He said that during the last year Sri Lanka’s export earning was $ 173.47 million and in the first quarter of this year it was $ 175 million, showing a remarkable rise. “This trade fair is a good opportunity for Sri Lankan businesses as well as Sri Lanka as a whole to showcase the country’s desire to gain more investments,” he added.

The Expo which runs until 16 June was inaugurated by China’s Vice President Li Yuanchao who pledged more assistance to South Asian nations, including Sri Lanka, in many fields.

Yuanchao highlighted the close links between Sri Lanka and China especially in the field of diplomacy while making a special comment on Sri Lanka. He also mentioned Sri Lanka’s move to ink the Rubber-Rice Pact in the 1950s even though there were no diplomatic missions between the two countries at the time. Speaking at the opening ceremony of the 3rd China-South Asia Expo and the 23rd China Kunming Import and Export Fair at the state-of-the-art mega exhibition complex, the Kunming Dianchi International Convention & Exhibition Centre, Yuanchao also highlighted the importance of connectivity among countries for economic advancement. He said that China had paid attention to improving transportation infrastructure in the region. As an example Yuanchao also mentioned the Chinese Government-funded Colombo-Katunayake Expressway, which has improved transportation facilities in the country.

Addressing a press conference prior to the inauguration of the event, Vice Governor of Yunnan Province and the Chairman of the Executive Committee of the third China-South Asia Expo Gao Shuxun said that the Chinese Government attached high importance to cooperation with South Asia and Southeast Asia. “Within the next five years, China promises to lift its trade volume with South Asia to $ 150 billion, raise its investment to South Asia to $ 30 billion, and provide a preferential loan of $ 20 billion to South Asian nations,” he said. The expo will also witness the active participation of over 500 domestic guests from 27 provinces, regions and municipalities, 12 national ministers and commissions, 18 central enterprises, 100 private companies and 10 financial institutions. The China South Asia Expo 2015 is being held at the brand new Kunming Dianchi International Convention and Exhibition Centre with an area of 5.4 million m2.

The number of overseas booths this year has been increased by 50% over last year. Special zones have been set for India. A total of 75 countries are taking part in the exhibition with over 20,000 exhibitors covering all eight South Asian nations and 10 ASEAN countries. Some 87 renowned enterprises are taking part at the Expo, including 25 Fortune 500 companies and eight top 500 domestic ones. As the theme country, India has organised an exhibition of about 100 companies, including TATA Group, Infosys Groups, Air India and Indian Jet Airways.

Addressing the 10th China-South Asia Business Forum, Minister Bathiudeen said: “China has already made substantial investments in Sri Lanka. In 2014 this stood at $ 3.5 million. However, there is much scope for further investment in sectors yet to be tapped.” He said that Sri Lanka welcomed committed and promising Chinese investors who could transfer skills and knowhow for tourism and leisure, infrastructure, knowledge services, utilities, apparels, export manufacturing export service and agriculture. He also revealed that China is the second largest supplier to Sri Lanka.

The signed contracts included 255 domestic investment projects with a value of 300 billion yuan ($ 49 billion) and 44 foreign investment and trade deals worth $ 5.7 billion, state-run Xinhua news agency reported. Domestic investment covers infrastructure, electronics and information, pharmacy, tourism and energy. Foreign investment contracts are related to agriculture, manufacturing, energy, culture and education. The international deals involve companies from the US, Japan, France, Italy, Thailand, Myanmar and Laos. Minister of State for External Affairs V.K. Singh heading a 200 business delegation from India took part in the event on Friday. India is the country of honour at the Expo.

West Bengal Finance Minister Amit Mitra, heading a delegation from his state, also attended the Expo. The five-day expo, also the Kunming Import and Export Fair, opened yesterday, attracting more than 20,000 businessmen and 3,179 enterprises from some 70 countries or regions.