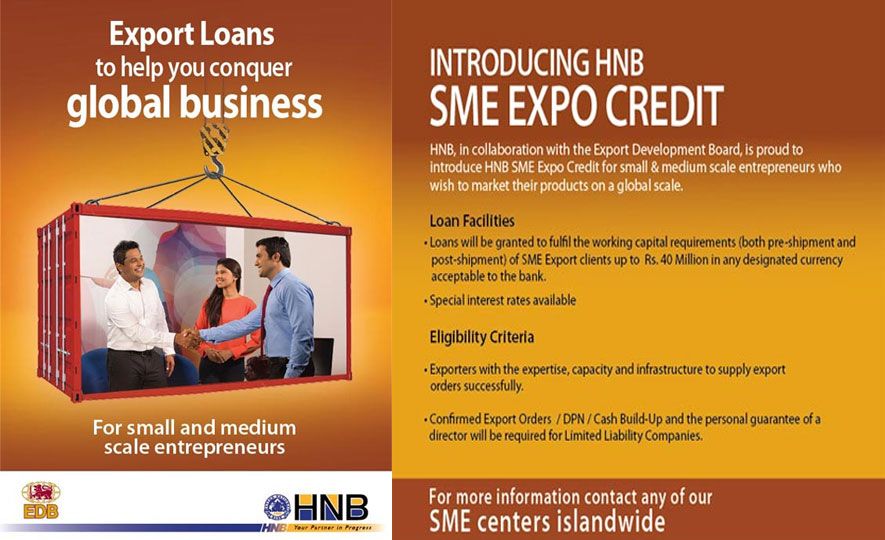 Hatton National Bank (HNB) in collaboration with the Sri Lanka Export Development Board (EDB) has introduced a new export credit scheme for the benefit of small and medium-scale exporters in Sri Lanka.

This scheme came to operation in September 2017 with the collaborative effort of both institutions. This novel scheme has paved the way for small and medium enterprises to undertake and process confirmed export orders received from buyers without any hassle and speedily.

Further, this scheme has encouraged the new exporters to cater to the export market. Any exporter having a confirmed order/s in his hand qualified to obtain assistance under the scheme, up to Rs.40 million or more than that, depending on the value of the order in Sri Lankan rupees or any other acceptable foreign currency, at a very low interest rate.

This has enabled the SME exporters to explore and enter into new export markets and deal with new buyers while, catering the buyers’ needs in the existing markets too.

According to HNB, under the scheme, Rs.576 million has been disbursed up to date among 18 exporters to meet the working capital requirements against the confirmed orders received from buyers for the products i.e. coconut and coconut based, seafood, toys, tea, coir based and industrial brushes and spices.

In addition, 30 applications covering the product sectors of tea, ornamental fish, stationery items, food items, spices, mineral, apparel, vegetables, cosmetics and software received by the bank are being evaluated at present to grant financial assistance to facilitate for working capital requirements to service the orders in-hand at the SME exporters.

According to the officials of HNB, 26 out of the above requests could also be financed positively in the near future to precede with the export orders. Further, duration given to buyers for settlement of the bills has been extended to 120 days from the duration that existed for 90 days.

The beneficiary exporters stated that the scheme is a great relief for new exporters to process with export orders in-hand as they had to invest their money on fixed capital investments such as factory buildings, machinery and equipment and commercial vehicles at the setting up of their businesses.

The EDB has proposed HNB to consider the same facility to be extended to indirect exporters (sub-contractors) too with a view to broad base the benefit of the scheme. The EDB as well as HNB are confident that this assistance scheme would be well supported toward achieving the export target of US $ 20 billion in 2020.