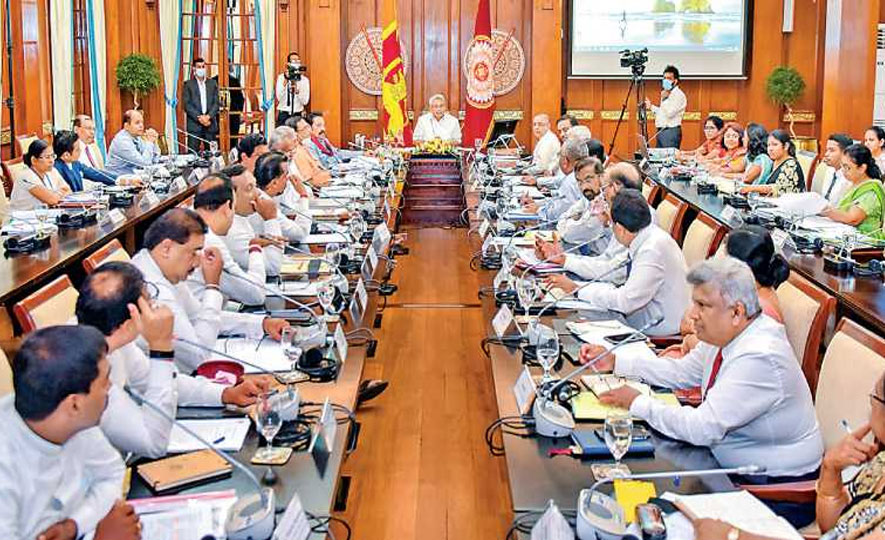 The first meeting of the Export Development Council (EDC) was held yesterday under the patronage of President Gotabaya Rajapaksa, focused on resolving issues related to exports in tandem with the National Export Strategy (NES) to be a game-changer in the post-COVID-19 economic transformation of Sri Lanka.

This was the first discussion the EDC held in 28 years, after it was established in 1972.

President Rajapaksa outlined the responsibility of the Council in creating new market opportunities, need for diversification in markets and products, adding that many of the signed international trade agreements are not favourable for Sri Lanka, stressing the need to review these agreements expeditiously in a manner that would be constructive and beneficial to the economy.

Confirming the continuity of the NES, he also pointed out the need to revise and modernise the strategy to swiftly address the issues relating to export sector and its progress.

Evaluating export data over the last couple of decades, it was pointed out that although exports have grown, exports to the gross domestic production (GDP) has not increased. Thereby, the Council has initiated several initiatives to increase the capacity of the local export sector, improve trade performance and competitiveness in the immediate future.

Accordingly, the Export Reward Scheme will be applicable from 1 October 2020 to 31 March 2021, where SME exporters will get 3.5% of the incremental export turnover of the same period a year ago and 2% for large exporters of the incremental export turnover for the same period. The Export Development Board (EDB) will make a formal announcement with all details in the immediate future for the export community.

“The damage done to the export sector by re-exports in the past was serious. Re-exports should be designed to ensure the safety of the farmers, producer and high quality crops endemic to the country. Import of raw materials required for value added products should be of the highest standard and under strict supervision,” President pointed out.

President also said he had personally instructed the foreign missions to work diligently to promote local products in the world market and attract investors. He said the goals to be achieved in the future will be set for all and pointed out the need to improve the efficiency of the marketing officers at the overseas missions.

Prime Minister Mahinda Rajapaksa pointed out the need to expand airport facilities and create an attractive environment for businessmen and investors.

“It was a great day for the entire export sector of Sri Lanka, to have the Export Development Council chaired by the President and Prime Minister along with the key ministers. We were able to discuss progressive policies on how to grow exports along with a strong focus on export development. The EDC will certainly be a game-changer for the export community and economic transformation of Sri Lanka,” EDB Chairman Prabhash Subasinghe told the Daily FT.

In August, President Gotabaya Rajapaksa gazetted the establishment of an EDC of Ministers in terms of the EDB Act No. 2 (1). The EDC is subject to any general or special directions given by the Cabinet of Ministers, and is responsible for the formulation and implementation of NES policies and programs.

Renewing EDB’s confidence that exports will continue to grow in the post-COVID era, Subasinghe said the reactivation of the EDC amplifies the importance of the sector in economic revival.

“This (EDC) will be a game-changer for the export community,” Subasinghe said, adding that he believes President Rajapaksa will guide Sri Lanka’s economy through directions given to EDC while also attending to the inter-ministerial coordination.