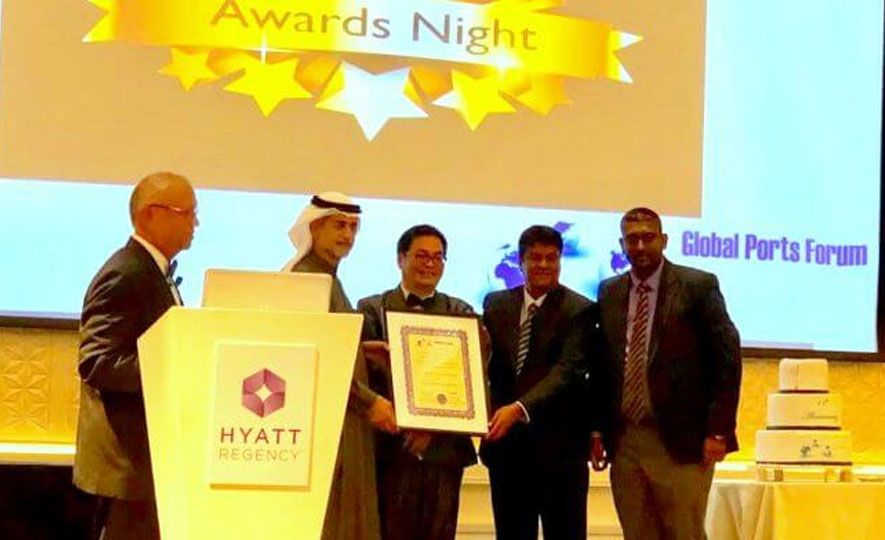 Sri Lanka Ports Authority (SLPA) won the Ports Authority of the Year 2019 Award by the Global Ports Forum (GPF) for the second consecutive year at the GPF awards ceremony 2019 followed by the conference forum held at the Hyatt Regency Dubai Deira, in the United Arab Emirates on 20 February.

Logistics, Marketing and Business Development Director Upul Jayatissa and Communication and Public Relations Chief Manager Nalin Aponso received the award on behalf of the SLPA from UAE Assistant Foreign Minister for Economic and Trade and Dubai Ports World former Group CEO Mohammed Sharaf who attended as the Chief Guest at the event.

The Global Port Forum Awards 2019 aims to recognise the most valuable contribution made by organisations and professionals in different areas of the Ports and Terminals Industry and acknowledge their roles and achievements in different categories. These awards are awarded based on the nominations received and also in recognition of the important contributions and achievements made by organisations and professionals across the industry of ports and maritime in the last year.

The prestigious panel of judges, comprising of Global Ports Customers and Senior Port experts from the Global Ports Council had duly shortlisted and selected the SLPA as the most deserving winner for the category of the GPF award for ‘Port Authority of the Year 2019’.

In a special message, Ports, Shipping and Southern Development Sagala Ratnayaka Minister congratulated and conveyed warn regards and wishes for the SLPA on the achievement.

From the cosmopolitan global port city of Singapore, the entrepreneurial decision was taken in 2008 to found and launch the GPF. The awards ceremony is organised annually by the GPF, in continuation of the commitment of improving global ports and furthering the interests of ports globally through collaborations among members of the port eco system.

The GPF Awards 2019 aimed to recognise the most valuable contribution made by organisations and professionals in different areas of Ports and Terminals Industry and acknowledge their roles and achievements in different categories. The awards are awarded based on the nominations received by the GPF and also in recognition of the important contributions and achievements made by organisations and professionals across the industry during the previous year.

It is also a significant achievement as it is the first time in history the Port of Colombo reaches the top of a global maritime ranking. With this growth, Port of Colombo has leapt ahead many other Asian Ports, Major European Ports and Dubai as well.

The relationship between the Management and SLPA trade unions, collaborative support by all parties and stake holders engaged in the port operations process has effectively contributed for the increase of productivity at the SLPA. Creating history, the Port of Colombo for the first time has recorded seven million container operations in the last year with joint marketing strategies by the three terminals, the Jaya Container Terminal (JCT), South Asia Gateway Terminals (SAGT) and Colombo International Container Terminals (CICT).

Under the new collective agreement, it was expected to minimise the waiting time of all container vessels outside the port waters by allowing operations of vessels at the immediately available terminal. Further, through this agreement, terminals are also able to promote the Port of Colombo collectively and collaboratively in the arena of international maritime business.

The SLPA was awarded the Ports Authority of the Year Award first in 2018 by the GPF.

The SLPA at present has prepared a Three-Year Development Plan to expedite the port sector development process in the country to further increase container volumes. These developments are aimed at making Sri Lanka the Maritime Centre in Asia.