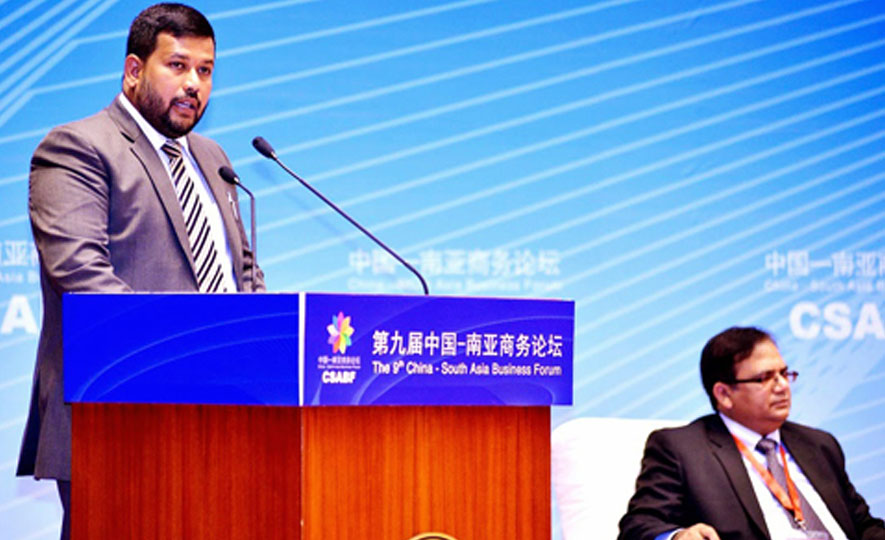 The Sri Lanka Export Development Board (SLEDB) in collaboration with the Embassy of Sri Lanka in Beijing organised the Sri Lanka Pavilion at the 2nd China-South Asia Expo in Kunming, China from 6 to 10 June with the participation of 135 Sri Lankan companies, displaying and promoting Sri Lankan product sectors such as gems and jewellery, tea, batik, handicraft, coir products, Ayurvedic products and giftware.

Minister of Industry and Commerce Rishad Bathiudeen ceremonially opened the Sri Lanka Pavilion at the expo and delivered the keynote address at the 9th China-South Asia Business Forum held on the sidelines of the 2nd China-South Asia Expo.

In his speech, the Minister highlighted the enormous potential for further promotion of trade and investment between Sri Lanka and China, before a large gathering of business entrepreneurs representing South Asia and the South East Asia region.

Deputy Speaker of Parliament Chandima Weerakkody, representing the Government of Sri Lanka, participated in the Opening Ceremony of the 2nd China-South Asia Expo. At a meeting with the Chinese Vice Premier Wang Yang, on the sidelines of the Kunming Expo, the Deputy Speaker sought the continued support and cooperation of China for further expansion of trade and commerce between the two countries.

Vice Premier Wang Yang, while commending Sri Lanka’s active participation at the expo, expressed the hope that the proposed FTA between the two countries would contribute greatly towards the expansion of bilateral trade between China and Sri Lanka.

Also on the sidelines of the 2nd China-South Asia Expo, the 6th Session of the Joint Committee on Trade and Economic Cooperation between China and Sri Lanka was held in Kunming on 7 June. Ministry of Finance and Planning Secretary Dr. P. B. Jayasundera led the Sri Lanka delegation and Vice Minister of Commerce Gao Yan led the Chinese delegation. A wide range of issues relating to Sri Lanka-China trade and economic cooperation was discussed by the two sides at the meeting.  Ambassador of Sri Lanka to China Ranjith Uyangoda, Secretary to the Ministry of Industry and Commerce Anura Siriwardena, Director General of Commerce R.D.S. Kumararatne, EDB Executive Director Dr. Yousuf Kachchi Maraikkar and senior officials from the Ministries of Finance and Planning and Industry and Commerce, the Department of Commerce, the Embassy of Sri Lanka in Beijing and the Consul of Sri Lanka in Chengdu participated in the events.