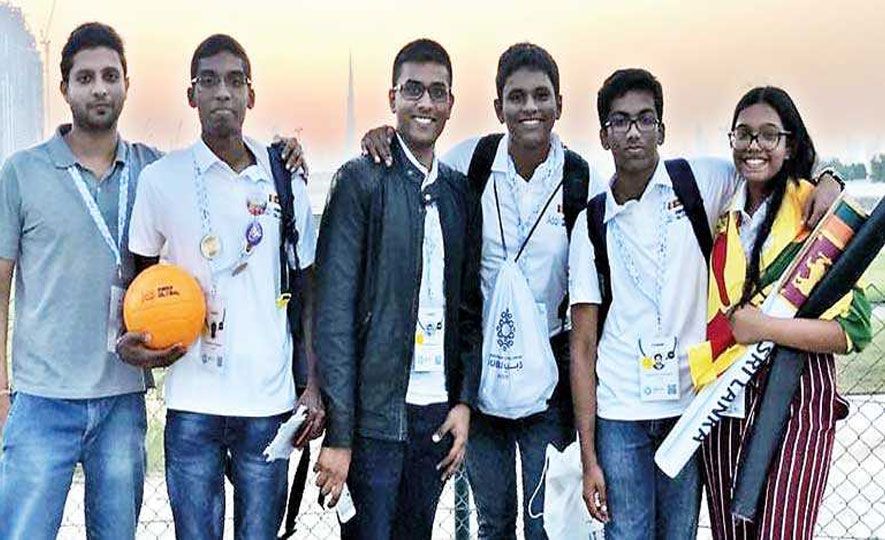 Sri Lanka reached the semi-finals of the FIRST Global Challenge, an annual Robotics Olympiad that was held this year in Dubai from 25-27 October with 189 countries participating. The team also won the Judges’ Award for Technical Excellence for the best designed robot for the second year running.

The FIRST Global Challenge is the largest robotics competition in the world for school students and a huge international event. The spectacular opening ceremony was attended by Sheikh Hamdan, the Crown Price of Dubai, and included a performance by well-known tech enthusiast will.i.am.

Team Sri Lanka won seven out of their nine qualifying games to qualify in 20th place for the finals. In each game, three countries are partnered together to compete against an opposing alliance of three countries. This means that results depend on who a country is allied with. In every game, Team Sri Lanka scored over 80% of the points scored by their alliance, a remarkable achievement showing how effective their robot was.

In the play-offs, Sri Lanka was allied with Guam, Kazakhstan and Great Britain. They won their two play-off matches to qualify for the semi-finals with the highest cumulative score of any alliance. In the semi-finals, they won one game but lost to the two eventual finalists after their allies’ robots encountered technical difficulties. They finished the proud winners of Bronze medals.

Each FIRST Global challenge addresses critical environmental issues such as access to clean water or providing renewable energy. This year’s theme ‘Ocean Opportunities’ required teams to design robots to collect pollutants (differently sized balls) from the ocean (the game area) and deliver them to a tiered processing area, with more points awarded for depositing balls in the top tier. Each country was given the same kit to build their robot from, so success depended on teams’ engineering, coding and problem-solving skills, not their financial resources.

While most countries developed quite similar robots that could push or drop balls into the processing area, Sri Lanka built a trebuchet that enabled them to shoot the large balls. Although much harder to build, it made Sri Lanka’s robot one of the most successful in the event, as they were able to deposit lots of balls in the top tier easily and with consistent accuracy. They were also one of the few teams to design a mechanism to collect the small balls instead of having to load them manually. The judges were so impressed by the robot’s innovative and advanced design that Sri Lanka was awarded one of the three main prizes for Technical Excellence for the second consecutive year.