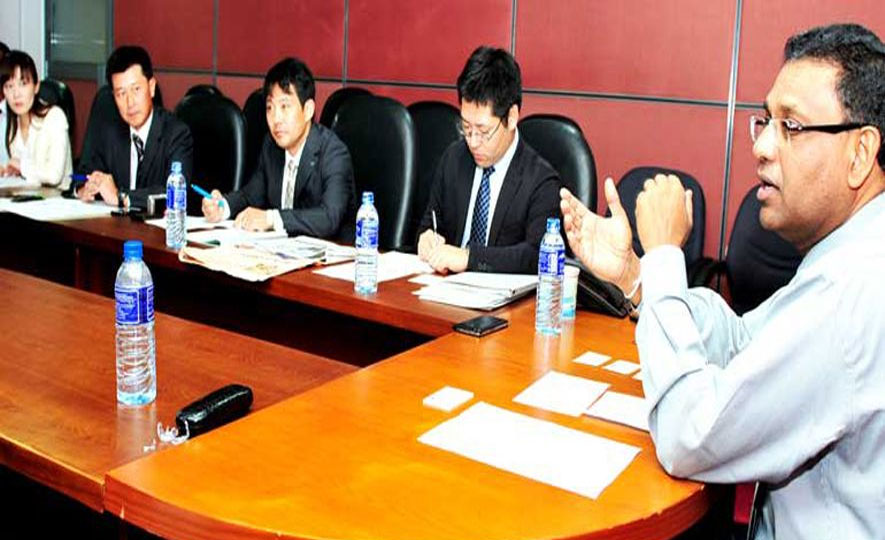 <p>Sri Lanka’s historic coconut based exports received a new lease of life on 4 August as a top Japanese coop-federation – also considered as a leading agro association in the world – started directly partnering with apex export entity, the EDB to strengthen the surging sector. The Lankan coconut sector is getting another international breakthrough with the first ever Lankan coco peat delegation scheduled to leave for Japan this October, facilitated by EDB. “We welcome Japan Zen-Noh’s assistance. It is time to focus on value added coco peat and other coconut based exports,” stressed EDB Chairman and CEO Bandula Egodage on 4 August in Colombo.
Egodage was addressing the visiting four-member delegation from Japan Zen-Noh (Japanese National Federation of Agricultural Cooperative Associations) who arrived to begin their Lankan partnership through coco-peat export product support – in that the visiting team has commenced their technical consultancy to develop coco peat products in Sri Lanka to identify constraints in production of coco peat, obtain technical consultancy to overcome problems, create awareness of Lankan coco peat industry to Japanese buyers, introduce Sri Lanka  to Japan as a capable and reliable supplier of coco peat  and promote Sri Lankan coco peat in Japan through Zen-Noh. </p>

<p>Also taking part were several member firms from the ‘Sri Lanka Exporters Association of Coconut Based Substrates’ which has 75 coconut product exporter firms. Non kernel coconut products such as coir and shells are called ‘coconut substrates’. Zen-Noh is one of the world’s largest federations of agricultural cooperatives founded in 1972. Zen-Noh is involved in the marketing, tracking and quality assurance of the products of its cooperatives. Zen-Noh is one of the world’s largest importers of animal feeds and agricultural fertilisers. </p>

<p>70% of the sales of chemical fertilisers in Japan are reportedly handled by Zen-Noh! The pioneering Zen-Noh delegation is now in town as a result of a one-to-one meeting EDB secured with Zen-Noh during the eighth International Garden Expo Tokyo (GARDEX) in 2014. Zen-Noh’s Kyouko Shinabe (Manager, Horticultural Materials Section), Suzuki Wataru (Manager, Fertiliser Section), Hiroyuki Takasu (Advisor, Foreign Trade Department) and Shigesumi Masanobu (Zen-Noh official) will be in Colombo till 7 August.</p>

<p>“Japan is Sri Lanka made coco peat’s topmost buyer in the world. Similarly, Japan too thinks Lankan coco peat to be the best among all the coco peat it imports” said Chairman Egodage and added: “We welcome Japan Zen-Noh’s assistance to improve our coco peat export value addition. But raw coco peat supplies are not healthy for both economies. Therefore it is time to focus on value added coco peat and other coconut based exports. It is here that Zen-Noh would play an important role in supporting the Lankan coconut sector. We are also keen to start Made in Sri Lanka coco peat international branding. We look forward to your advice to upgrade the sector as well. I thank Zen-No’s pioneering initiative and also choosing EDB for it. We are pleased that this effort is also supporting the exports vision of the Government and our Minister, Rishad Bathiudeen.”
As for coco peat exports, Sri Lanka’s total coco peat exports to the world stood at $ 82 million in 2014 rising by 11% from 2013’s exports – and in the first half of 2015 alone it stood at $ 47 million. Japan is the number one buyer of Lankan coco peat, taking in 46576 Mts of it in 2014, an increase of 13% from 2012. Including coco peat, Sri Lanka exports 45 types of coconut products across the world which includes both kernel and non-kernel coconut exports.</p>

<p>“We are experiencing greater and greater increase in demand for coco peat imports in Japan,” said Zen Noh Assistant Manager Masanobu Shigezumi and added: “Lankan coco peat is used for many applications in Japan including as soil conditioners and as cultivating media. There are no quarantine issues for Lankan coco peat in Japan since Lankan coco peat is of quality. We would like to observe Lankan coco peat manufacturing technological situation first, before developing them-by examining the existing production plants and processes. Thereafter, we will consider starting partnership with the Lankan sector.”
Egodage responded: “EDB and our coconut sector are ready to extend our fullest cooperation to Zen-Noh. I am also pleased to announce that the first ever Lankan coco peat delegation is scheduled to leave for Japan this October encouraged by Zen-Noh and facilitated by EDB.”</p>

<p>Leading members of Sri Lanka Exporters Association of Coconut Based Substrates (SLEACBS) will take part in the pioneering Lankan coco peat delegation to Japan scheduled for mid-October 2015. SLEACBS is responsible for more than 90% of coconut substrate exports from Sri Lanka and its 75 member firms provide over 20,000 direct employment opportunities to Lankans.  </p>