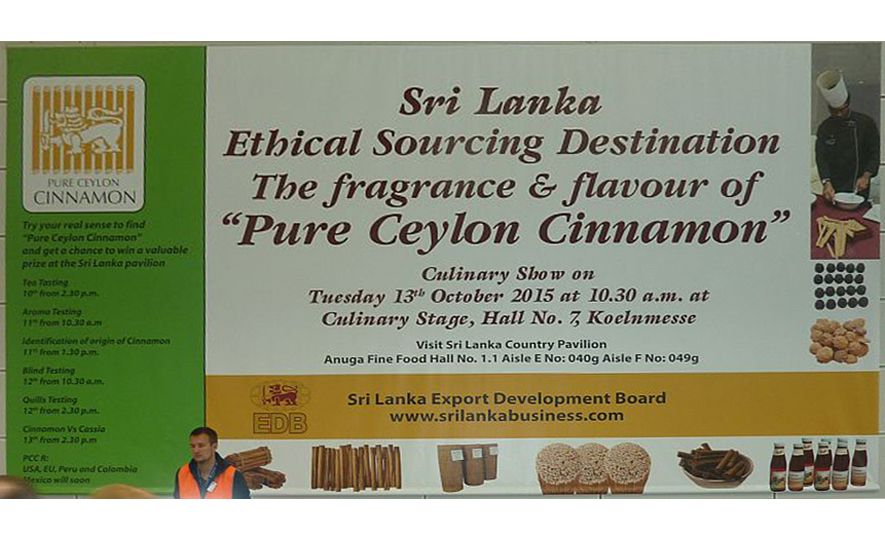 The 33rd Edition of the Anuga International 2015, the biggest General Food and Beverages Exhibition of the world was held in Cologne, Germany from October 10-14, 2015.  7063 companies from 108 nations exhibited their products to the 160,000 trade visitors from 192 Nations.

Sri Lanka participated in this exhibition with 48 leading exporters who showcased their high quality food and beverages, exportable products to the international market arena. Sixteen of them participated with the support of the Sri Lanka Export Development Board (SLEDB) in the SLEDB country pavilion, while 6 exhibitors were in the Sri Lanka Tea Board Pavilion (SLTB).  26 individual exporters exhibited their products on a large scale prominently.  In addition to Ceylon tea, spices, virgin coconut oil, desiccated coconut, coconut cream and milk, coconut and king coconut water with other fruit juices, dried fruits and vegetables, pickles, confectionery  an array of large food items were displayed by the exhibitors.  According to the exhibitors, participation in Anuga was strategically important for them as it provided the venue to meet their loyal customers and look for new potential international buyers.

The participation of the SLEDB and the SLTB were accompanied by a set of side events to underline the significance of unique Sri Lankan products.  One of those events was the launch of the screening of the German version of the documentary video on Ceylon Tea by Ambassador Karunatilaka Amunugama in the presence of Dr. Monica Beutgen, Secretary General of German Tea Association/ German Tea Council at the Sri Lanka Tea Board booth. The SLTB arranged a liquid tea service in their booth and the visitors were served with pure Ceylon tea.

The Sri Lanka Export Development Board also organized a Pure Ceylon Cinnamon Cooking show in German language  on 13th October 2015  at the culinary stage of Anuga , in collaboration with the Sri Lanka  Consulate General of Frankfurt and  Colonial Chefs Association with the main  aim  of  creating an awareness of the uses  and advantage of pure Ceylon Cinnamon in the day to day culinary dishes  of  German kitchen  over the cheap substitute Cassia.  Several novelty German style dishes based on Ceylon Cinnamon were introduced and well received by the enthralled audience, who usually only used  Cinnamon for sweets. The event was organized  in German language to reach to a large native audience which was clearly observed by the strong attendance throughout the show despite their busy schedule during Anuga.  As a special feature, some of the dignitaries were called on to the stage to take part in the show.  Among them were Ambassador Amunugama and the former Lord Mayor of Cologne Fritz Schramma.

Gerhard Weber, Secretary General of the European Spice Association quipped that “the show precisely hit the soft spot of the German Cinnamon market,” by showcasing that Ceylon Cinnamon is more than just an ingredient for Christmas cookies.

On an invitation of Ambassador Amunugama, Dr. Günther Horzetzky, State Secretary of the Ministry of Economic Affairs, Energy and Industry of the State North Rhine-Westphalia visited the Sri Lanka pavilion on 11th October 2015 and assured fullest cooperation to introduce Sri Lankan products in his State.