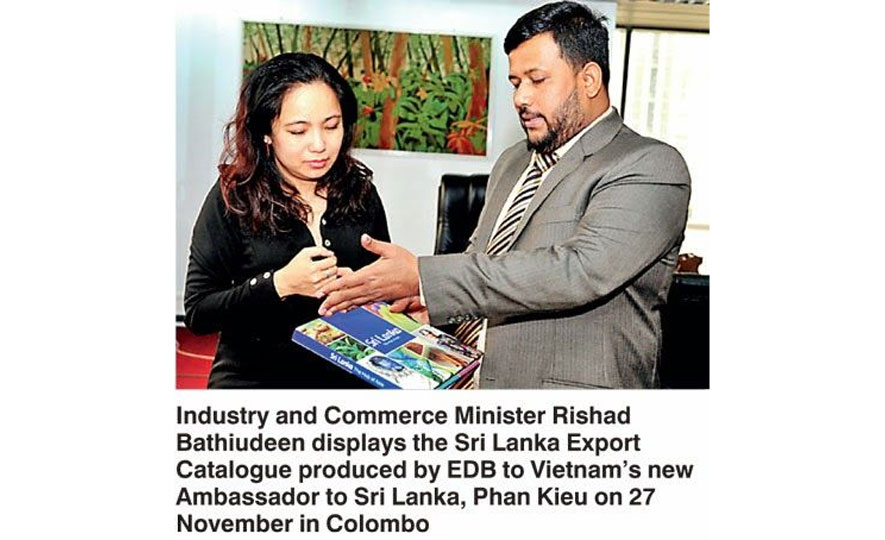 Stepping up its trade cooperation with Sri Lanka, Vietnam said that it was working towards establishing a groundbreaking FTA with Sri Lanka.

In view of this, Sri Lanka has promptly appointed its first-ever trade officer to Vietnam, the world’s fifth largest apparel exporter which is ready to partner with Sri Lanka’s own apparel industry.

Ambassador Thu was speaking to Industry and Commerce Minister Rishad Bathiudeen during her maiden courtesy call on the minister at EDB.

Joining Minister Bathiudeen in the discussions were officials from the Department of Commerce and EDB Chairman and CEO Bandula Egodage.

“As per the export vision of President Mahinda Rajapaksa, we are targeting $ 20 b in exports by 2020 and free trade agreements with our partners could help us in this effort. The Department of Commerce has increased its efforts to boost bilateral trade. I am pleased with the establishment of our successful first-ever Lanka-Vietnam official trade mechanism in August. This Joint Trade Subcommittee has enhanced existing bilateral trade and economic relations to new heights. I am pleased to inform Your Excellency of the appointment of the first Lankan Trade (Promotion) Officer to Vietnam by the Department of Commerce and this officer is expected to start in January 2015. Next year we are also planning to send a strong Lankan business B2B delegation to Vietnam, based on a Vietnamese invitation to do so during my August visit.” In reply Thu said: “We are working on receiving the Lankan B2B delegation in Vietnam next year. Expansion of your exports to Vietnam will give a wider choice of Lankan goods to our consumers and an FTA is a great instrument.”