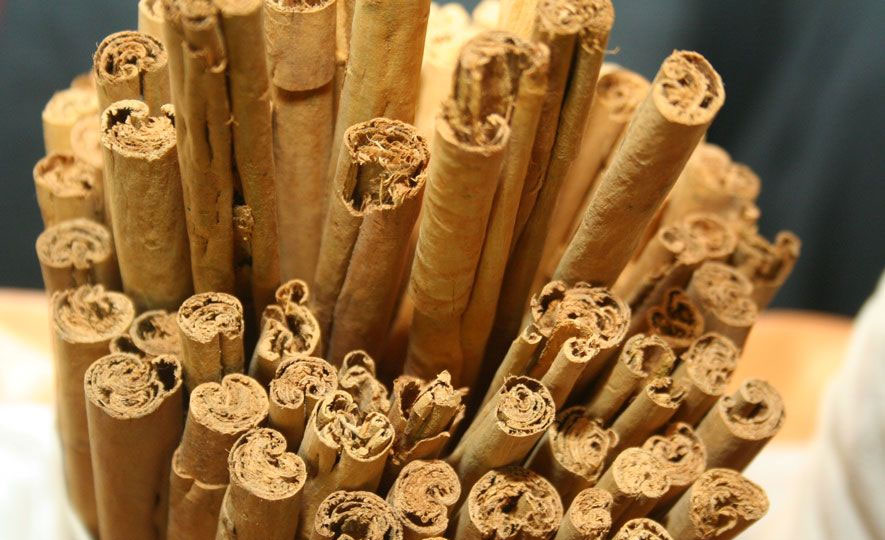 As Sri Lanka’s first batch of exporters successfully captured their licences to officially flavour the world with Sri Lanka’s second global brand yesterday, the country recommitted to $ 1 billion in spice and cinnamon exports by 2020.

“Today, nine Sri Lankan cinnamon export firms are empowered by this initiative. Together, these nine firms claim more than 25% of our annual cinnamon export values. We are aiming at $ 1 billion in spice and cinnamon exports by 2020,” said Minister of Industry and Commerce Rishad Bathiudeen yesterday, addressing the ‘Inaugural issuance of Pure Ceylon Cinnamon brand licenses to Lankan exporters event’ at the EDB Auditorium.

In yet another important industry support initiative in the tradition of Export Development Board for Lankan exporters, for the first time, nine Sri Lankan cinnamon export firms qualifying to export cinnamon using ‘Pure Ceylon Cinnamon brand license’ were awarded license certificates by Bathiudeen at the event.

“Today, I congratulate the first batch of qualifying exporters,” said Bathiudeen. “This effort focuses on Sri Lanka’s second global brand, Pure Ceylon Cinnamon. Today’s initiative aims at developing this foreign exchange earner to become a strong contributor to our rising export earnings thanks to the committed vision of President Mahinda Rajapaksa. In fact, our export earnings in 2013 have increased by 6.3% year-on-year to a strong $ 10.3 billion, compared to $ 9.7 billion earned in 2012.  We are also aiming at $ 1 billion spices and cinnamon exports by 2020. Annually, Sri Lanka produces more than 15,000 metric-tons of true cinnamon.  We are pleased to note of the continuous increase in our cinnamon exports by 150 committed Lankan exporters.

“In 2013, our cinnamon exports stood at $ 132 million increasing from $ 130 million in 2012. The 2013 value is in fact a 78% increase from 2009 export value that stood $ 74 million. For the fifth year, Mexico became the topmost buyer of Ceylon Cinnamon, with $ 61 million of orders in 2013. United States, Peru, and Colombia were our other top cinnamon buyers. I am pleased to note that among them, Peru’s Ceylon Cinnamon orders increased by a strong 32% in 2013. In the same year, cinnamon orders from Bolivia increased by 28%. Today, nine Sri Lankan cinnamon export firms are empowered by this initiative. Together, these nine firms claim more than 25% of our annual cinnamon export values. I am pleased to observe that to select these firms the EDB has followed a stringent evaluation process. I am given to understand that the EDB has carefully proceeded through more than 25 steps to select today’s qualifying exporters. Today’s presentations from EDB will give you more info. These successful cinnamon exporters would find today’s licenses enabling them a comparative advantage in the demanding global marketplace. This licensing also highlights the main aspects of Ceylon Cinnamon and differentiates Cinnamon from the cheap substitute Cassia. We believe that this logo, which carries internationally accepted quality assurance, is the best marketing technique to promote cinnamon in our target global markets.”

“When it comes to maintaining high quality of our cinnamon, it is not negotiable,” said EDB Chairman and CEO Bandula Egodage, making a presentation on the cinnamon industry in Sri Lanka. “Cinnamon volumes contribute to 1.15% of our total exports. Sri Lanka exported $ 132 million of cinnamon in 2013 while the world demand stood at $ 301 million. This shows the demand levels for cinnamon. One of the main functions of Pure Ceylon Cinnamon logo is being the differentiation of it from the cheap substitute Cassia through our unique characteristics. The Cabinet has entrusted the EDB to hold ownership of ‘Ceylon Cinnamon,’ ‘Sri Lankan Cinnamon’ and ‘Sri Lankan Kurundu’. The EDB has established 20 GMP certified Cinnamon Processing Centres in Galle and Matara Districts as well as a Cinnamon Training Academy to assist the industry to overcome labour constraints.”