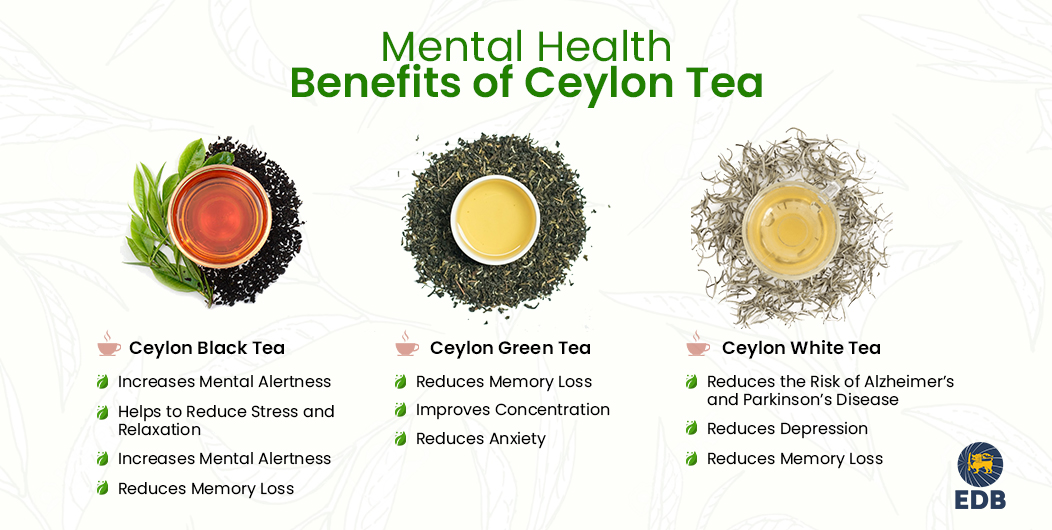 Thus, the dominant position Ceylon Tea enjoys in the global market is not solely due to its celebrated taste and aroma. The numerous health benefits it brings is also a major reason why consumers worldwide have embraced Ceylon tea. Influenced by the best climate conditions and supportive soil varieties, these teas are chock full of nutrients and health benefits.
Each type of tea comes with health benefits that serve both the body and the mind of the consumer. The mental health benefits of Ceylon teas in particular are multiple. Just one sip of this miracle beverage will take care of your mental health just fine.

Ceylon Black Tea is the first type of tea grown in and exported from Sri Lanka. Irrespective of the region it is grown in, Ceylon Black Tea has a classic bold, full, and brisk taste. Traditionally, black tea is steeped in hot water and brewed to be served as a regular cuppa. Today, novel twists have been introduced to the classic black tea and it has now emerged as a widely sought-after beverage – the flavoured iced tea.

No matter what form it is presented in, Ceylon Black Tea comes with incomparable mental health benefits.

Among all the types of tea produced by Sri Lanka, black tea is the most oxidized and consequently contains more caffeine than other types of tea. According to research (1), caffeine and theophylline in black tea inhibit the enzyme adenosine 3, 5-cyclic monophosphate (cAMP) phosphodiesterase and this is associated with freshness in mood which links to heightened mental alertness.

Studies further suggest that L-theanine in black tea impacts the brain's electric activity, has psychoactive properties and act as a neurotransmitter; it increases alpha waves of the brain during resting and this is associated with a relaxed mental state. (2)

Ceylon Black Tea is also known to stimulate the activity of Gamma-aminobutyric acid (GABA), an inhibitory neurotransmitter that has anti-inflammatory effects and reduces insomnia, high blood pressure, stress, and anxiety (3)

Ceylon White Tea is another type of tea presented by Sri Lanka; it produces a delicate yellow-colored beverage with a naturally sweet subtle flavour. Produced by plucking the buds and leaves of the Camellia sinensis plant before they are fully opened, the uniqueness of Ceylon White Tea is a result of the way that it is processed.

Processing of Ceylon White Tea involves a four-step process that includes withering, fixing, rolling, and drying. The first step involves spreading the leaves out in the sun, drawing the moisture to the surface. The leaves are then subjected to a fixing process where they are gently passed through rollers to bring them down to create their shape and to intensify the flavor. Drying is the final step of the process which ensures fermentation. It inceases and prevents the molding from further developing the flavor.

Reduces the Risk of Alzheimer’s and Parkinson’s Disease

Due to its unique way of production, Ceylon White Tea is known to reduce the risk of Alzheimer’s and Parkinson’s disease. Not only does it help to fight inflammation, but it also prevents proteins from clumping and damaging the nerves. The polyphenols and EGCG in white tea help to reduce free radicals that is one of the main causes of neurodegenerative diseases like Alzheimer’s and Parkinson's disease.

According to certain studies, white tea can further help to deal with depression. It also lowers the anxiety levels of consumers as it calms the stimuli in the brain. It is also believed that L-theanine present in white tea helps in the production of the neurotransmitter GABA, which further supports natural calming effects.

Green tea is one of the world’s most famous healthy tea drinks. Made from unoxidized leaves of the Camellia sinensis plant, green tea has successfully retained its popularity through the decades. A major reason behind this unwavering popularity is the health benefits Ceylon Green Tea brings to consumers, both in terms of mental health and physical health.

Research has found that green tea improves one’s mood and helps with depression(4); several studies that involved both animals and humans bear evidence to this. For example, a cross-sectional study that measured the depression levels of 1058 elderly Japanese participants found that the consumption of green tea is independently related to the reduction of depressive symptoms.

It has been further found that L-theanine in green tea serves as an anxiolytic agent and reduces anxiety. Another study concluded that the consumption of green tea is related to the reduced incidence of dementia; the study found that research participants who drank 5 or more cups of green tea developed dementia 27% less often than those who consumed less than 1 cup of green tea.