Home/Blog/Raising the Bar on the Sri Lankan Pepper Supplies

Raising the Bar on the Sri Lankan Pepper Supplies 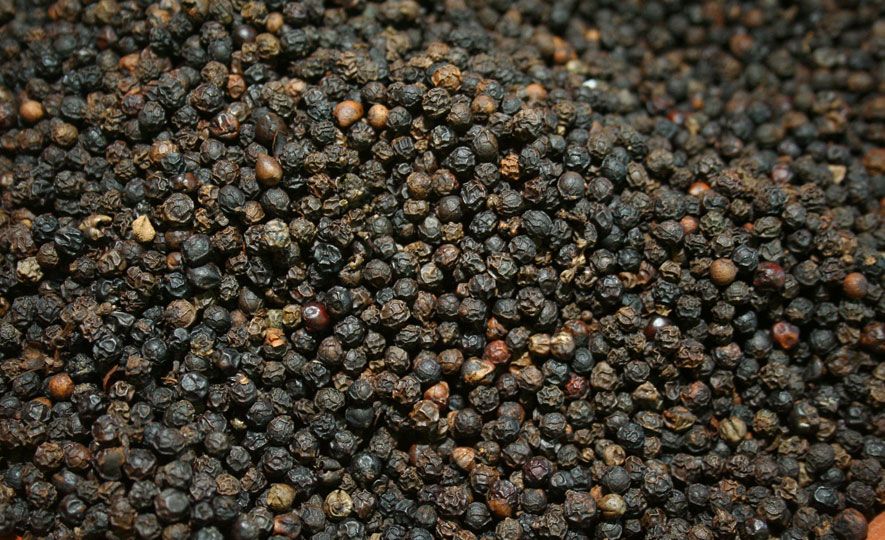 Black pepper (Piper nigrum L.), popularly hailed as the “King of Spices”, is the most significant and widely used spice in the world. There’re but a few countries in Asia including Sri Lanka and the Pacific, Brazil and Madagascar that produce pepper.

Currently, Sri Lanka ranks at fifth place in terms of area under pepper cultivation (after India, Indonesia, Vietnam and Brazil), and seventh place in terms of production, with a world share of 5.7% in production. Also, Sri Lanka is the fifth largest exporter of black pepper, after Vietnam, Brazil, Indonesia, and India. However, productivity levels in the industry remain low, despite improvements seen over the years.

To capitalize on this and enhance the quality of pepper supplies further, a number of measures can be collectively adopted. Further, building the capacity of stakeholders in the value chain to meet standards can boost pepper exports and competitiveness further.

After cinnamon, pepper is the most important cash crop in Sri Lanka. There are multiple actors carrying out various functions in the Sri Lankan pepper value chain as illustrated here. The figure 1 vertically maps the functions/activities, stakeholders and supporting services in the chain from point of inputs to retail. 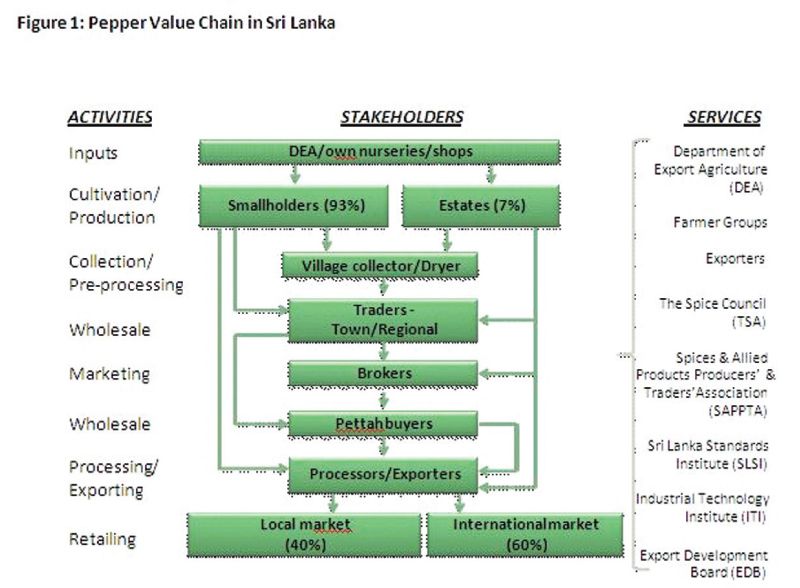 Currently about 60% of pepper production of the country is exported, while the remainder is consumed domestically according to government sources. India buys 62% of pepper exports from Sri Lanka to the world followed by Germany, Pakistan, Egypt, USA, UAE, UK, Vietnam, Saudi Arabia and Spain. Together, these top ten countries take between them 91% of total pepper exports from Sri Lanka.

Given that majority of black pepper from Sri Lanka is exported to the low end of the market (India), Sri Lanka should explore high end markets elsewhere - USA and EU for instance, which are yet to be fully exploited. At the same time, stringent standards in the developed countries can serve as a trade barrier to exporters that attempt to penetrate those markets. Therefore, it’s quite for Sri Lanka to raise the bar further on the country’s pepper production with an eye to penetrating those high value export markets.

Germane to pepper exports are the Sri Lankan Standards for Black Pepper (SLS 105 Part 1: 2008) and White Pepper (SLS 105 Part 2: 2008); however, neither of these product standards is mandatory for export at the moment. Systems certifications are increasingly sought by the pepper industry at the exporter level and these include, ISO22000 Food Safety Standards, Hazard Analysis and Critical Control Points (HACCP), and Good Manufacturing Practices (GMP). A few exporters have obtained organic and fair-trade certifications as well. However, these standards have all been voluntarily adopted by the exporters.

Moving into the Future

‘Come Together’: Raising Standards in the Sri Lankan Pepper Industry’, a research article authored by Janaka Wijesiri, a researcher attached to Institute of Policy Studies of Sri Lanka (IPS), and which is also the main source for this blogpost, delineates a number of measures that can be collectively adopted by the Government and stakeholders in the pepper value chain to enhance quality standards of pepper supplies in Sri Lanka further: