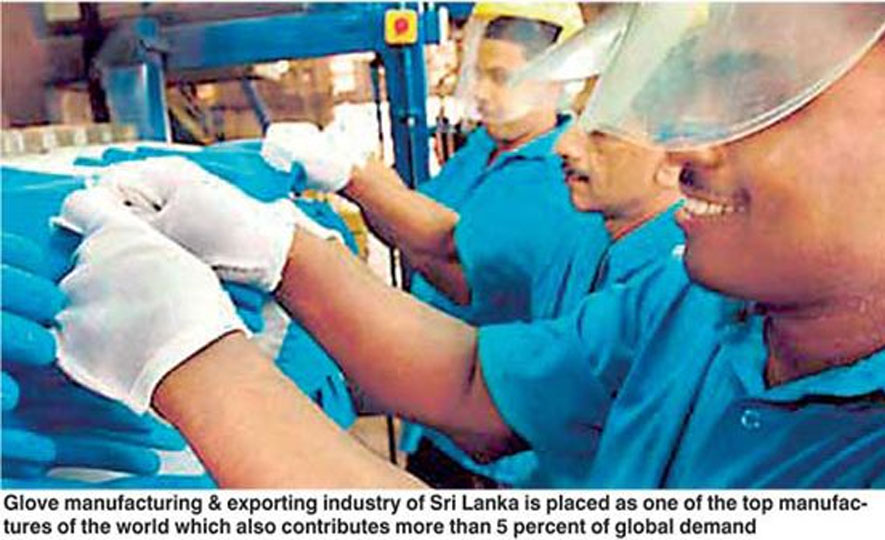 The Sri Lankan rubber products manufacturing industry is composed of about 4,530 manufacturing organizations of small, medium and large-scale entities.
Nearly 70-80 percent of the local rubber production is used by these domestic industries. Sabaragamuwa and Western provinces record 87 percent of the total number of rubber industries in the country.

All large and small-scale industries and 80 percent of medium-scale rubber industries can provide employment for trained personnel in rubber technology. Within a relatively short period, this industry has become a reputable major world supplier of quality rubber products.

Dry rubber-based products have an export value share of 78 percent while latex based rubber products have a share of 22 percent.  Out of the latex-based rubber products, hygienic or pharmaceutical articles have a very minimal share.  In the dry rubber sector, tyre category dominates the non-tyre sector with a share of 85 percent of the export value share of the dry rubber based products.

Our external trade in rubber and rubber products has been dominated by the value-added rubber products consisting of 11 product groups from HS codes 4007 to 4017.  It highlights the following points: (i) despite market recession in year 2009, the country has been maintaining a favourable balance of trade throughout the 6-year period; (ii) the average share of the value of finished products exports was 81 percent from total exports in year 2007 changed to 83 percent in 2012; (iii) year on year average growth rate of the total value of rubber finished products exports was 36 percent from year 2007 to 2008 decreased to -10 percent from year 2011 to 2012.

In the tyre manufacturing sector, we produce pneumatic and semi pneumatic tyres, tubes, solid tyres, and re-treading materials. Despite the reduction of tyre exports to about 56 percent in 2009, tyre sector accounted for more than 60 percent share in the total value of exports in the rest of the period. The share of export earnings in 2012 accounted for 66 percent of the earnings from the tyre sector. Solid tyre sector earned US $ million 331 in 2012. It was the largest contributor in tyre sector in the last 6-years period .

The Asia/Pacific region was by far the largest market for tyres, accounting for over half of global tyre sales in 2010. This region is expected to register the strongest growth in tyre demand through 2015.  Revenue from new pneumatic tyre exports was US $ million 215.4 in 2011, although and a small drop was observed in 2012.

Tyres produced under this type consist of tyres used for motor cars including racing cars, busses, lorries, motor bicycles, bicycles and industrial machinery. Tyres for motor vehicles, which accounted for over 60 percent of all tyre demand in 2010, are expected to remain the largest segment of the tyre market by 2015. New pneumatic tyres of rubber are used for motor cars, wagons, racing cars, buses and lorries and always had the highest demand in pneumatic tyre sector. This sector earned US $ million 19.9 in 2011 and US $ million 27.7 in 2012. Total export quantity of new pneumatic tyres was 10,066,243 units in year 2012. It was only 9,632,000 units in the previous year. According to the world market news, demand for these kinds of tyres grows at a rate of 5 percent per annum. Sri Lankan new pneumatic tyre sector accounts for approximately 38 percent of total tyre sector earnings in year 2012.

The global bicycle tyre industry is worth several Billions of dollars. Europe is said to consume 30 Million bicycles annually and is growing at a rapid rate due to interest in cycling to work and pleasure. Additionally, bicycle tyres need to be replaced at least twice a year. Total export of bicycle tyres was 7.56 million units in year 2012 from about 9 percent against the previous year. Tanzania, Italy and Egypt are the major bicycle tyre importers from Sri Lanka. Sri Lanka exported 29,58,419 of bicycle tyres to Tanzania and earned US$ Million 8.4 year 2012 which was about 50 percent of total exports.

In 2009 like the other industries, Sri Lankan solid tyre processing industry suffered from global financial crisis. This industry recorded a reduction of 41 in percent average annual growth again. Solid tyre sector performed well in the years 2010 to 2011 achieving higher growth rates of 73 to 84 percent respectively.

Availability of good quality NR in the form of latex crepe is one of the reasons for the interest in these products. In the footwear industry, Sri Lanka was one of the pioneers of supplying footwear in the world. Carpets and Floorings are another. The emphasis has been on the low cost low technology oriented products

Latex is perhaps the best raw material to manufacture certain products such as surgical gloves, thin walled products like condoms and extremely flexible horses. World Health Organization (WHO) defines medical gloves as disposable gloves used during medical procedures. They include, examination gloves (non-sterile or sterile) and surgical gloves that have specific characteristics of thickness, elasticity and strength and are sterile.

Global demand for medical gloves is growing at 8 – 10 percent per annum. Malaysia is the largest contributor supplying 63 percent of global demand while 29 percent and 9 percent is supplied by Thailand and Indonesia respectively.

Glove manufacturing & exporting industry of Sri Lanka is placed as one of the top manufactures of the world which also contributes more than 5 percent of global demand. This Sector has performed well during the year 2011 by increasing it’s growth to 22 percent .Total export value earnings from surgical gloves was US $ million 43 in year 2012 which accounted for 25 percent  of total latex-based products. Earnings from surgical gloves were US$ 45 million in year 2012. Exports accounted for 40 percent of total surgical gloves earnings of Sri Lanka.

Household glove is the first dipped product manufactured in Sri Lanka for export. Though the gloves are termed household, they are widely used in the industry for variety of purposes. The unlined gloves are widely used in the food industry. US is the major export destination of Sri Lankan household gloves. The global demand for rubber gloves has increased due to recent regulations on occupational safety. The demand for rubber gloves is expected to grow by 10 percent per annum.

Carpets and Floorings are among the products of interest in Sri Lanka. It contributes to about 11% of dry rubber based non tyre products. This sector didn’t perform well during the year 2012 although it showed 39 percent growth in the year 2011. The growth of this sector decreased by 21 percent in year 2012. USA, France and Germany are the major export destinations of these types of products. USA contributes about 28 percent of total cellular rubber earnings of Sri Lanka.