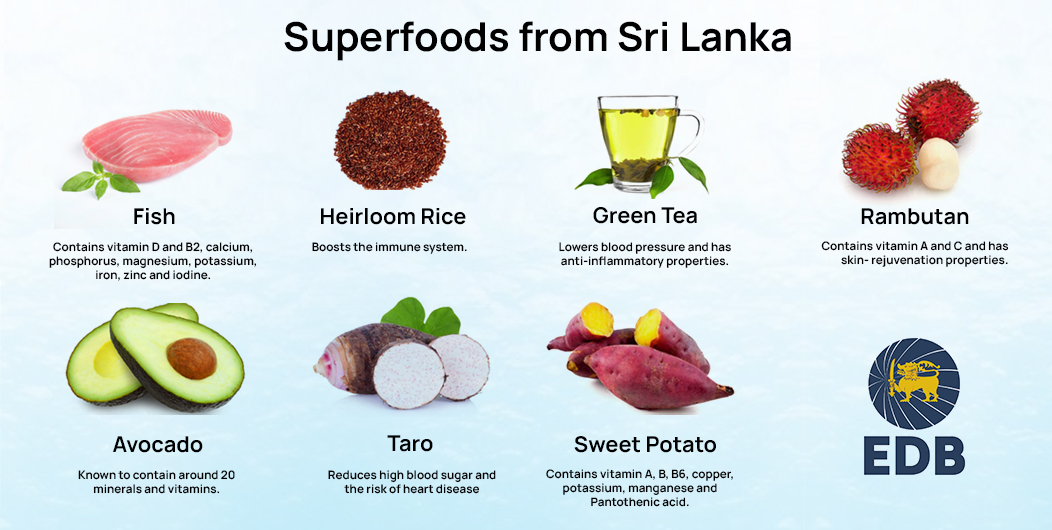 A major buzzword revered by healthy-eating enthusiasts, superfoods refer to food packed with exceptional levels of nutrients that contribute to overall health and wellbeing. Superfoods most commonly used in western recipes include kale, blueberries, flax seeds, pistachios, hazelnuts, etc that are not locally found in Sri Lanka. Yet, this in no way means that Sri Lanka doesn’t have superfoods.

Because we do! Some of the most trendy superfoods of 2021 come from far away exotic lands and Sri Lanka stands on the top of the list. With a multitude of tropical varieties of fresh produce and grains, Sri Lanka is a dream paradise for a daring soul adventurous enough to add a little twist to their regular diet with these tropical superfoods. And here are some of the most widely sought-after superfoods from Sri Lanka.

Included in the Harvard list of 10 superfoods by Harvard Health Publishing, fish is a superfood that comes with an abundance of nutrients and health benefits. Compacted with protein, fish is an acclaimed source of energy. Vitamins and minerals contained in fish include vitamin D and B2, calcium, phosphorus, magnesium, potassium, iron, zinc, and iodine. The high levels of Omega 3 fatty acids aka the good fats in fish make it heart-friendly and reduce the risk of heart diseases. Fish with the highest amounts of omega 3 content exported by Sri Lanka include yellowfin tuna and trout. It is recommended that healthy eaters should incorporate this superfood into their diet at least twice a week.

A lesser-known superfood on the rise at the moment, ancient grains refer to grain varieties that are subjected to minimal change due to selective breeding and purported to contain high levels of nutrients. Ancient grains from Sri Lanka include heirloom rice varieties such as Kaluheenati, Suwandel, Dal wee, and Maa wee. Alongside these age-old heirloom rice varieties is millet, a staple in our ancestors’ diet. It is a common belief in Sri Lanka that the consumption of such grains gave our ancestors Hercules strength.

This could well be true given that these heirloom rice varieties are high in nutritional value. In general, dietary plans involving heirloom rice are known to boost the immune system and specific varieties of these grains bring their health benefits to consumers. For example, the high fiber content of Kaluheenati increases bowel movements and is recommended for those suffering from constipation. Dik wee is used to treat diabetes and the high levels of zinc and antioxidants in it helps to reduce high cholesterol and inflammation.

Green Tea is no new addition to the superfoods list. Standing proudly among the handful of beverages that have withstood the test of time, Green Tea boasts a millennium-old history of being celebrated for its medicinal and therapeutic effects. Not only is it known for its soothing effects and the ability to fight against anxiety, but it is also venerated for the multiple health benefits it brings to consumers. The flavonoids and free radical scavengers in green tea prevent cellular damage caused by free radicals. It lowers blood pressure and has known anti-inflammatory properties. As it is rich in antioxidants, having a cuppa could protect you from neurodegenerative diseases. Green tea is further known to reduce the risk of stroke and coronary disease.

A lesser-known fruit that comes with hairy spikes covering its thick rind, Rambutan is an exotic delicacy that is native to Southeast Asia. What makes it a superfood is the nutrients it contains and the health benefits it brings. Rambutan is rich in vitamins like vitamin A and C and contains high iron levels that are known to prevent anemia. It lowers blood pressure and helps to reduce the level of LHD cholesterol or bad cholesterol. As it contains high levels of antioxidants, the rambutan fights against cellular damage and helps to prevent the formation of cancer cells. In addition, the rambutan is known for skin rejuvenation and immunity-boosting.

Nutrient-dense avocados are a vastly popular superfood. It is known to contain around 20 minerals and vitamins that contribute to the overall health of consumers. A one-stop fruit fulfilling many of your nutrient requirements, avocados are rich in Vitamin E, C, K and B6. It also comes with high contents of magnesium, potassium, beta carotene, riboflavin and many more. The ever-rising popularity of avocados is also due to its omega 3 content that is heart-friendly. Further, avocados are a staple in weight-loss diets as they help consumers feel fuller in-between meals.

Taro or Colocasia esculenta goes by many names across many countries. The edible root is native to Southeastern Asia and there are several species of the taro that are fit for human consumption. The most popular in Sri Lanka is the variety called ‘Kiri ala.’ The somewhat starchy taro root teems with nutritions; one cup that amounts to 132 grams of taro contains 6.7 grams of fiber, 30% of the daily value (DV) of manganese, 22% of the DV of vitamin B6, 19% of the DV of vitamin E, 13% of the DV of copper, 10% of the DV of Phosphorus, and 10% of the DV of Magnesium. It is also known to reduce high blood sugar and the risk of heart disease.

Yet another root vegetable, sweet potato or yam is a superfood for many reasons. For once, similar to other superfoods coming from Sri Lanka, yams contain essential nutrients such as vitamin A, B, B6, copper, potassium, manganese and Pantothenic acid. Moreover, white-skinned sweet potato is credited for improving the insulin sensitivity of people with type 2 diabetes. Sweet potato further reduces the risk of cancer thanks to the number of antioxidants it contains. It is also known for balancing blood pressure and improving the digestion of consumers.

One of the least known superfoods, Jackfruit can be consumed raw or ripe, though it is raw jackfruit that is most widely sought-after. Raw jackfruit helps to beat diabetes as it has a much lower glycemic load compared to wheat and rice. The soluble fiber in jack reduces high levels of cholesterol. It also contains vitamin A that is known to improve your vision and vitamin C which will improve your immunity and protect you from infections. Coming with potassium, magnesium, manganese, and iron, jackfruit is also a powerhouse full of minerals.