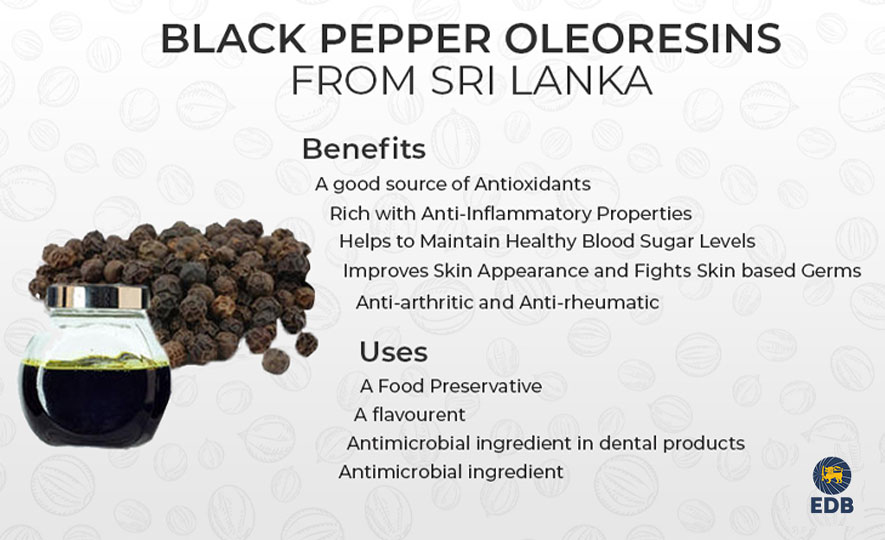 An oleoresin is a viscous liquid and a semi-solid material that is produced using the fine ground powder of its source (1)  Black pepper oleoresin is the natural extract of the dried tender berries of Piper nigrum, commonly known as Black Pepper. It is a yellowish-brown liquid with a pungent biting aroma of its spice. It is also the most consumed spice oleoresin in the world, representing 50% of the global spice oleoresin production.

What is Black Pepper?

Black pepper is the most important and widely used spice in the world. Hence, it is renowned as the “King of Spices”. Sri Lanka is among the few Asian countries that engage in black pepper production and cultivation while South-West India is the traditional home of this beloved spice.

It was also the first oriental spice introduced to the western world and was responsible for a lot of revolutionary changes in western culinary practices. Piper nigrum, the mother plant of the spice, is a woody evergreen climber. Black pepper is the mature fruit produced by this plant. (2)

Smallholders in Sri Lanka cultivate black pepper in the intermediate agro-ecological zones located in the mid and low country regions. These are mostly grown in small plots in lands that are less than 20 acres or 8.1 hectares. Most farmers dry their harvest and submit it to the market, while some manage to dispose of it in a fresh form. Black Pepper-based product manufacturers collect the spice from farmers and send it to facilities where it is further cleaned, graded, and packed to meet international standards.

Black pepper oleoresins and essential oils are among the value-added products manufactured using spice. They meet the market demand alongside the peppercorns and the ground version of black pepper. About 60% of Sri Lankan black pepper is exported to countries such as India, Pakistan, Germany, Egypt, the USA, UAE, UK, Saudi Arabia, and Spain. (4)

Production of Back Pepper Oleoresins

Black pepper oleoresins can be extracted through steam distillation. It starts by purifying the black peppercorns and crushing them to create a powder. This powder is placed in a steam distillation tank where steam is introduced to distil the oil content in pepper. The oil-water mixed steam is then cooled to obtain oil and water-mixed liquid. The oil is then separated from this mixture, where the top layer contains the essential oil of black pepper and the bottom layer contains water.

Consumption of back pepper oleoresin helps consumers to achieve various health benefits while inhaling and topical application also has its unique benefits. Piperine is black pepper’s most important bioactive compound. It is also the alkaloid responsible for the pungency of the spice. The high level of piperine content in Ceylon Black Pepper oleoresin is a major reason for most of the health benefits it delivers.

Proper physiological functioning of the human body requires a good balance between free radicals and antioxidants. If the number of free radicals increases, a condition known as oxidative stress can occur. Oxidative stress results in several diseases (5)  The piperine found in black pepper oleoresin is a rich source of antioxidants, which reduces free radical damage and helps to maintain good health. (6)

Chronic Inflammation can result in conditions such as arthritis, heart disease, diabetes, and cancer. It can be caused by injuries, low immunity, and exposure to chemicals and can hurt tissues and organs. According to studies, piperine can act as a reliable compound when treating inflammation. It desensitizes a specific pain receptor of the body, reducing the feelings of discomfort. (7) It has proved to suppress inflammation in the airways causing asthma and allergies. (8)

The antioxidants present in the oleoresin help the body to protect itself from free radicals that are responsible for ageing and diseases and reverse the harm caused by free radicals. The warming quality of the substance improves circulation. It also boosts cell regeneration and collagen production, helping to decrease the visibility of fine lines. Topical application can further help the skin to heal blemishes and bruises more quickly.

All these benefits and taste factors result in black pepper oleoresins being useful for many purposes. This includes the production of various health products and food additives. They are also used as a colourant and a food preservative due to their antimicrobial properties. Oleoresins extracted from Ceylon Black Pepper are unique due to their high piperine content. Therefore, they share more nutritional properties than the other extracts present in the market.