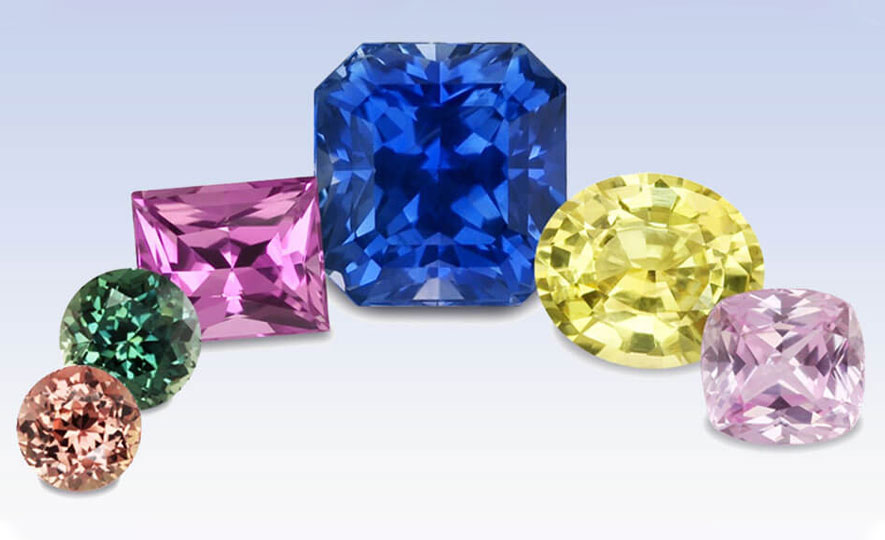 The gem industry in Sri Lanka enjoys a celebrated history mainly due to the Island's gem reserves and the country stands today as one of the world's largest gem suppliers with products of unparalleled quality.

While the country exports over 75 different kinds of precious and semi-precious gemstones, sapphire varieties make nearly 85% of the export share at the moment.

Throughout the history, Sri Lanka has unearthed Sapphires of large size and impeccable quality such as the Star of Adam, The Star of India, The Blue Giant of Orient and the Logan Sapphire which make up some of the largest Sapphires in the world.

The Sapphire's fame originates from the deep blue hues that are naturally imbued within the precious stone. The Ceylon Sapphire, in particular, stands out for possessing a unique shade of blue that is similar to that of the cornflowers in full bloom.

However, the sapphire is not a gemstone confined to the limitations of appearing in a single colour. The precious stone is instead found in a wide range of colours that range from yellows and pinks to reds and greens. Typically, a coloured Sapphire is merely referred to by its preceding colour with the only exceptions made for Padparadscha which is the only variant of the Sapphire that has been bestowed with a moniker of their own.

The Padparadscha draws its name from the Sinhalese term for lotus flowers the stone is one of the rarest and most prized forms of the Sapphire and is immediately recognized by the rich combination of pink and yellow hues that harmonize across the surface of the stone mimicking the appearance of its aptly named origin.

Yellow Sapphires found in Sri Lanka are imbued with shades that range from a soft pastel yellow to a rich deep gold that is known as golden sapphires while the Sri Lankan Ruby speaks of the brightly coloured sapphires that possess a delightful shade of pink.

Sri Lanka is also home to rare green Sapphires that contain dark shades of black or brown which impart a deep contrast to the stone's otherwise tranquil green colours. These dark shaded Sapphires have not been mined anywhere else in the world making them a unique variety to Sri Lanka.

The global recognition achieved by the Ceylon Sapphire speaks volumes to the timeless beauty and resounding durability present in the precious stone. The Ceylon Sapphires achieves all the benchmarks of quality, colour purity and precisely cut designs that catapult the stone's name to the top of the international market where it flourished under the constant demand of foreign buyers.

The gem mining in Sri Lanka is primarily conducted in areas of land where the soils and gravel have been washed from mountainous regions which are coincidentally the premier land conditions for agricultural prospects. To ensure that food generation does not clash with gem mining, strict regulations are imposed by the gem mining industry to allow seamless operations that protect the livelihood of all parties involved. The regulations placed on gem mining include restrictions on non-Sri Lankan citizens that require strict licenses even on privately owned land.

Naturally unearthed Sapphires are often prone to flaws in colour due to impurities and other minerals present within the stone's structure. In such cases, the precious stones undergo extensive colour enhancement which requires the stones to be heat treated at extremely high temperatures to bring out the purest colours that aren't compromised by impurities.

The cut of a gemstone is one of the qualities that decide the market value of the product. The Sri Lankan gem industry is home to some most effective traditions of precision cutting techniques. A combination of traditional knowledge and modern technology have helped the local industry to produce finely cut gemstones that possess the most brilliantly polished colour sometimes aided by colour treatments that have captivated the hearts of millions around the world.

As a result, Ceylon Sapphire currently enjoys a consistent demand from global jewellery and watch brands that employ the Island's niche precision cutting services in recognition of the craftsmanship skills present in the local industry that meets the standards of the market's top contenders.