The Difference Between Cassia and True Ceylon Cinnamon 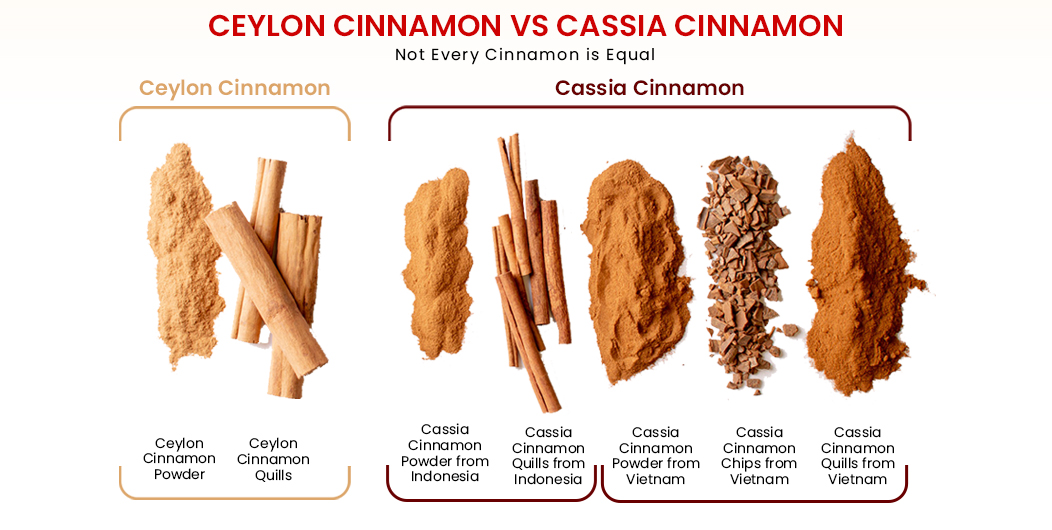 Cinnamon is a widely available spice used daily across households, businesses, and industries around the world and serves many purposes apart from cooking.

The spice is made using the inner barks of the Cinnamomum tree which are dried until they curl into rolls. Cinnamon found in this form is known as cinnamon sticks and quills which are also used to make cinnamon powder once ground. The cinnamon tree grows in well-drained moist soils and the plant reaches a maximum height of 15 meters. It has thick oval-shaped leaves with smooth margins. (1)

In ancient Egypt, cinnamon was a highly sought-after spice used for embalming and religious practices. It was once more valuable than gold. The spice was also used for religious rites in medieval Europe. Moving on, it was also the most profitable merchandise for the Dutch East India Trade Company.

When trade became an important source of revenue, spices were considered the most important merchandise, and cinnamon was the most important of it all. 3000 years old evidence of cinnamon trading was found during excavations in Tel Dor, located about 30 kilometers to the south of Haifa, in Israel, suggesting the possibility of the long-range spice trade from the Far East westward having taken place some 3,000 years ago

Despite the vast history and use of cinnamon, not every cinnamon in the market is the same; there are two main types of cinnamon namely Cassia Cinnamon and Ceylon Cinnamon. (2)

Ceylon cinnamon is lighter brown when compared to cassia cinnamon. The true cinnamon cultivation and processing in Sri Lanka is mainly carried out by smallholders.

Commercial production of the variety begins 3-4 years after planting. When the time is right, the stems are removed and utilized to prepare cinnamon essential oil for distillation. Pieces of the bark are then removed and placed inside one another to form Ceylon cinnamon quills.

In Sri Lanka, peeling and processing of Ceylon Cinnamon are mainly done by hand using the traditional knowledge and tools, unique to the country.  (3)

However, between Ceylon and Cassia Cinnamon, Ceylon has the lowest amount of Coumarin amounting to only 0.004% or 250 times less.

Cassia cinnamon is processed the same way as any other cinnamon. The variety is scientifically known as Cinnamon aromaticum or Cinnamon cassia. It is light reddish-brown and has a strong flavor. Cassia is also known as Chinese cinnamon. This is the type of cinnamon that is sold mostly in North America. The variety contains different subspecies such as C.cassia, C.burmani, C.loureirii, and C.tamale. (4)

The cinnamon variety contains hydroxy chalcone and other similar chemicals that improve insulin sensitivity. It also contains chemicals that activate blood proteins and increase blood sugar uptake. As a result, the consumption of cassia cinnamon might aid the control of diabetes. Although it contains such values, cinnamon fanatics consider cassia cinnamon as a variety of lower quality. It is also cheaper when compared to the prices of other cinnamon varieties.

Ceylon cinnamon is indigenous to Sri Lanka yet it is now grown in Seychelles, Madagascar, and Northwestern India but 80% of the global demand for Ceylon Cinnamon is fulfilled by Sri Lankan exporters.

Cassia cinnamon usually occurs wild in the mountains of Southern China. With the increasing demand for an affordable variety of cinnamon, Chinese farmers now cultivate spice in Guangxi and Guangdong provinces.

Once these two varieties enter the market, they can be identified based on the shape and pattern of the quills. The quills of Ceylon cinnamon are made using the dried inner bark of the stems which are rolled into quills that are less than 0.08 mm of thickness. It has a single spiral curl and it is filled with single short pieces of bark.

Cassia cinnamon is rolled to the center to make scrolls that have a thickness of 1.5mm. When dried, it forms a double curl and a small bit of a straight bark. Its other long edge spirals towards the opposite direction.

Ceylon cinnamon is considered to be the most delicate among the major species of cinnamon. Its flavor is more subdued, less bitter, and has a sweet finish. It has a sweet aromatic smell. Whereas, cassia shares a strong, spicy-sweet flavor, and aroma. Its flavor is extremely bitter when compared to true cinnamon. It produces a burning aftertaste once consumed.

The essential oil produced using the bark of Ceylon cinnamon contains trans-cinnamaldehyde, eugenol, and linalool as its main components. All these components account for 80% of its composition.  The dried stem of the cassia bark contains cinnamaldehyde, cinnamic acid, cinnamyl oil, and coumarin as its components. (5) True cinnamon contains an ultra-low level of coumarin. Coumarin is an aromatic chemical compound that is known to possess hepatotoxic and carcinogenic properties. This is an advantage to the spice variety as such properties can cause illnesses in human beings. (6)

Tau is a substance that builds up in the brain. This can lead to Alzheimer’s disease. Both Ceylon cinnamon and cassia cinnamon contain bioactive compounds that block the formation of this substance in the brain. This is an advantage shared by both varieties. However, cassia cinnamon consumption can sometimes end up with bad news. Consuming large amounts of the variety is considered to be unsafe due to its high composition of coumarin. Topical application of cassia on the skin might also lead to allergic skin reactions. Therefore, both these types of cinnamon are healthy, but Ceylon cinnamon can be considered as a healthier choice.

The difference between Ceylon and Cassia Cinnamon can be summarised as below;