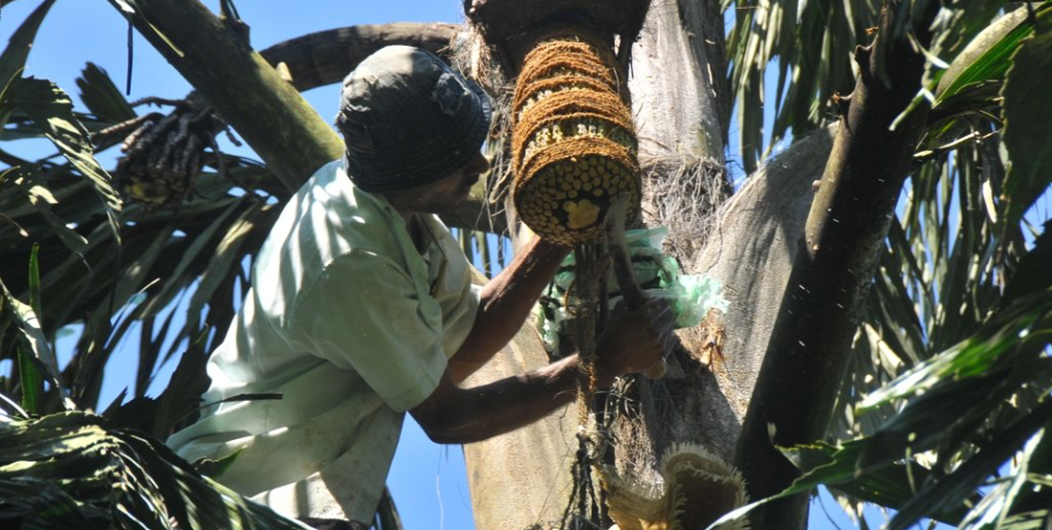 Kithul jaggery and Kithul treacle or syrup (locally known as KithulPani) are two of the prized food products in Sri Lanka sourced from the fishtail palm also called ‘jaggery palm’. Fishtail palm (Caryota urens), a species of flowering plant in the palm family, is a tree native to Sri Lanka, India, Myanmar and Malaysia (perhaps in other areas of the Indo-Malayan region).

One of the sugar palms, a mature fishtail palm, is as tall as 40ft. to 50ft and thrives in Sri Lanka wet zone or the central highlands.

For the production of both jaggery and syrup, it’s the sap of its flower that’s used. For a fishtail palm to mature and blossom, it takes as many as 10 years approximately. The fishtail palm is considered a versatile food source since it helps produce several food products.

Tapping the Palm Flower and Collecting the Sap

The kithul tree tappers know which type of flower yields the best sap for the production of toddy, jaggery, or syrup. So, they pick a mature tree that’s close to flowering and build a substitute ladder of sorts.

One of the most common methods is to cut a tall enough bamboo tree and cut off its leaves with stems of seven to eight inches long and secure it to the selected fishtail palm tree with strong creepers or coir ropes. It has to be strong enough to withstand the weight of the tapper who may climb up and down it several times every day so long as the flower yields sap. The bamboo stems serve as both handholds and footholds as the tapper climbs up and down. The tapper also builds a sturdy enough structure for him to sit safely as he taps the flower for sap atop the tree.

The next thing is to apply medicine (a concoction of sorts whose recipe remains known only to the tappers) to the flower, which they believe, will enhance both the quality and the yield of sap collected from it over time. The medicine they use to treat the flower mainly contains chillies, kocchi, pepper, cumin, fennel, souring agents, and garlic even though it’s known that some other chemicals are used sometimes too. They apply this medicinal concoction through a careful incision made to the top of the flower and leave the flower to be tempered. In a few days, they begin to tap it – make an incision with a razor-sharp knife and remove a thin slice of the flower and tie a container (a clay pot) to collect the sap that trickles from the cut. To produce jaggery or syrup, they boil this sap while continually stirring it.

A sticky and cloyingly sweet syrup with the colour and thickness of honey, Kithulsyrup, at its purest, boasts woody, floral, smoky, and even savoury notes. Despite its vital place in the Sri Lankan kitchen, the Kithul treacle is becoming something of a rarity. The syrup is used as a sweetener in traditional desserts, like curd and treacle.

The syrup is also used as a sweetener in Sinhalese and Tamil New Year treats like kavum, a deep-fried sweet made of rice flour and coconut milk, and aluwa, a flat, diamond-shaped sweet made of rice flour, cashew nuts and Kithulsyrup. It’s also used to replace refined sugar in smoothies, cakes, and other baked goods at some restaurants in Sri Lanka.

To produce kithul jaggery, a partially refined palm sugar, the sap has to be boiled beyond the point it turns to the syrup so that it gains in thickness and its water content is further evaporated. The gooey honey-coloured mixture is then poured into bowls fashioned out of coconut shells and is left to cool off and solidify.

Kithul jaggery is as much a food sweetener as Kithulsyrup. It is the kithul jaggery that takes the pride of place as the perfect sweet accompaniment to the auspicious dish of milk rice on festive occasions. It is the sugar substitute to be nibbled on with a cup of herbal tea, the sweetener with congee, and the honey in the rich dessert wattalappam. More recently, it has become the flavor of modern delicacies like cake and ice cream, available in supermarket chains and confectionery stores.

One writer on BBC says kithul jaggery is more than an indigenous medicinal food or a delectable dessert. To him, it’s the concentrated essence of millennia-old tradition. This amply illustrates how much kithul jaggery has become part of our food habits in this part of the world.

Yet another food ingredient sourced from the fishtail palm is kithul flour. Kithulflour is obtained from the core of the trunk. It’s believed that only the fishtail palms that don’t flower or don’t yield sap can produce flour. Kithul flour is a much healthier substitute for wheat flour in the preparation of many food items and is known to provide a great number of health benefits such as:

All in all, the fishtail palm or jaggery palm is an excellent source of food and also provides a means of living for the tappers concentrated mainly in Sri Lanka’s wet zone. Also, the demand for Kithul syrup and jaggery in the export markets keeps growing. It’s already beyond our current capacity to supply. How to seize this massive opportunity must be the question on the minds of all the authorities responsible for developing this sector.