Home/Blog/Diverse Flavors of Ceylon Tea and Their Origin

Diverse Flavors of Ceylon Tea and Their Origin 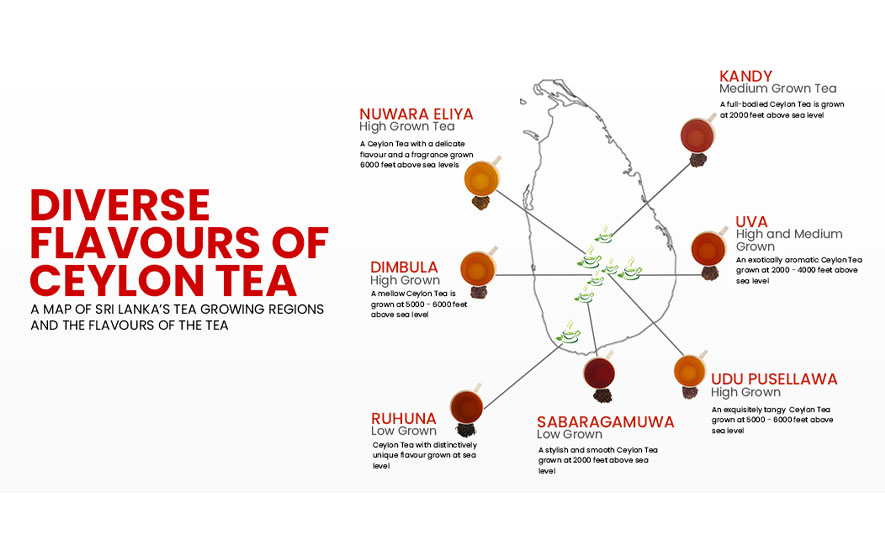 Since the very first tea plant was planted at the Royal Botanical Gardens, Peradeniya, the Sri Lankan Tea industry has come a long way for almost two centuries. Once it went commercial, Ceylon Tea was soon renowned as the world’s finest tea based on its unique taste, and quality ingredients.

Loved by tea enthusiasts all over the world, Ceylon Tea meets the rising demands of the global tea market in various flavours and varieties. Ceylon Tea is also marked as the cleanest tea in the world since the product does not contain any artificial additives or harmful pesticides.

While most of the Ceylon Tea estates are located in the central part of the country, where the climatic conditions and the rich soil provide the world's finest teas with the best environment to grow, Ceylon Tea cultivation has also expanded into the lower regions of Sri Lanka, creating a spectrum of flavours.

Once plucked, Ceylon Tea is processed through the traditional orthodox method where the leaves are withered, rolled, oxidised, and dried. Even though all these leaves go through a common process, a true tea gourmet might notice the difference in the flavour of some Ceylon Teas.

Although there are various varieties of Ceylon Tea such as Ceylon Black Tea, Ceylon Green Tea, and Ceylon White Tea, they are all born from the leaves of the common plant, Camellia sinensis. Regardless of all the upgrades that the leaves might face afterwards, the common Ceylon Tea leaf will sometimes carry a different flavour and each flavour has its own origin story.

The main reason behind this difference is the “District” or the Terroir these plants are grown in. The tea country of Sri Lanka is divided into seven regions. The soil composition and climate of the region produces a Ceylon Tea variety with a district flavour, colour and aroma.

Kandy has always played a key role in the tea industry in Sri Lanka. As a part of the hill country, the area has a cool climate and high moisture in the soil. The cultivation altitude of Kandy ranges between 650m and 1300m, or  2000 - 4000 ft above sea level. Just like other regions that follow, Kandy tea has its flavour influenced by its growth elevation.

A cup of Kandy tea carries a lighter colour than the other teas. Estates of the region are mostly located at the western slopes of the hills. The quality of their products is by the “Western-quality season”. This means that the best Kandy tea is produced during the first quarter of the season.

The strength of a tea plantation is inversely proportional to its elevation. As a result, Kandy tea grown at a higher elevation results in small leaves that deliver a subtle and delicate flavour when compared to the tea grown at a lower elevation, where the leaves are larger and have a stronger flavour.

Kandy tea is also available in a range of grades and leaf particle sizes. The leaf particle size can affect the strength of the brew. Kandy teas have a bright infusion with a coppery tone. It has a strong flavour even though it appears to be light in the cup.

Other than its cold climate, scenic views, and high elevation, Nuwara Eliya is known for its lush tea gardens. Cold and wet in climate except during the dry season, the rainfall in the area is moderate.

This unique terrain and the climate collaborate to produce some of the finest and most celebrated teas in the world. Tea plantations at Nuwara Eliya are situated 6,128 ft above sea level, while most of them fall under the shadow of Pidurutalagala, the highest mountain in Sri Lanka. Nuwara Eliya tea enjoys two seasons where they deliver their best output in two seasons. They are the “Eastern season” and the “Western season”. Tea leaves from Nuwara Eliya create a greenish-yellow tone when infused and are the palest infusion among all the Ceylon Tea varieties.

While the region is located at the very centre of the hill country, the balance between its two main climatic seasons may vary from estate to estate. The rarefied and refined quality of Nuwara Eliya tea perfectly sets itself apart from lower-grown varieties. The high altitude of the region results in the growth of a bush with smaller leaves that have an orange hue. Just like other tea varieties, high mountain tea is also available in different grades. One thing to note about Nuwara Eliya tea is that the smaller the leaf particle is, the stronger and less subtle the tea is.

Grown at an elevation between 3500 - 5000 ft, tea grown in the Dimbula region can be categorised as “High-grown”. The estates are misty most times of the year. The Southwest monsoon wets the western-facing estates of the region from May to September. Giving the plants a chance to relax, “Quality season” that starts off the year and continues till March or April, provides the estates with cool, dry winds. It is also the season where Dimbula estates yield their best product. The air during the day is crisp and cool during this season.

The land arrangement of the area results in a variety of microclimates that are responsible for differences in flavour. Dimbula tea somehow shares the same characteristics. It produces a fine golden-orange hue in the cup with a distinctive freshness that leaves a clean flavour in the mouth when drunk. Once Dimbula tea is smelled, its aromatic qualities share notes of Jasmine mixed with cypress. Higher the elevation that the tea is grown in, brighter and fresh is the tea. The tea that comes from the Nanu-Oya sub-district proves this feature. It shares the same characteristics as Nuwara Eliya tea since it shares the same elevation of growth. Tea from other sub-districts of the region such as Dickoya carries a stronger flavour.

Udu Pussellawa is a small, low-populated district that is entirely dedicated to tea cultivation. It is located on the Eastern slopes of the hill country between the districts of Uva and Kandy.  A part of the area’s uncultivated areas is occupied by the Hakgala Strict Nature Reserve. The Uda Pussellawa region is famous for exotic plant species and rare wildlife. The climatic conditions of Udu Pusselnnawa are very different when compared to western plantation regions. The district receives most of its weather from the North-East monsoon that rains on the eastern slopes of the hill country.

The climate at Uda Pussellawa is wet and misty since the Hakgala area itself receives rain for an average of 211 days every year. It also enjoys wind from the Southwest monsoon between June and September. Tea from this region appears darker in the cup with a pinkish hue and a hint of great strength. Its best tea is produced in the Eastern quality season between June to September. It is followed by the western season where the plants are affected by dry and cold conditions that add a hint of rose to the tea. When the region is subjected to heavy rainfall, it produces darker, strong flavoured tea. The tea leaves grown in Udu Pussallawa are also available in a variety of sizes.

Although it is not situated far from Kandy and Nuwara Eliya, Uva is considered Sri Lanka’s most remote province. Reaching the region from coastal areas is difficult. A lot of steep, winding roads have to be passed just to reach its provincial capital, Badulla. Regardless of all the difficulties of reach, the tea from Uva shares its characteristics under Ceylon Tea flavours. Its mellow, smooth taste distinguishes it from other varieties. The variety is well known since it was the tea grown in the Uva estates of Sir Thomas Lipton that persuaded Americans to take up the tea-drinking habit.

The tea leaf produced in the region is more blackened due to its withering when compared to leaves from other areas. A wide range of tea varieties is produced in Uva, including a full range of small-leaf grades as well as CTC varieties. Normal photosynthesis in the tea plant is disrupted during the desiccated monsoon win during July - September. The hot days and the cold nights result in chemical changes that improve the flavour and the aroma of the tea. Uva tea produced during this season carries a pungent, slightly mentholated characteristic that distinguishes it from its output during the other seasons.

More focus was given to making tea prioritized cultivation around the year 1900,  where estates were opened up at the foothills of the central country. At this time, most of the plantations were owned by the British. Back then, the Ceylonese planting fraternity was at practice. This was a group that specialized in the plantation of tea, rubber, and other crops. When it came to the 1970s, political and economic changes in the middle east resulted in an increased demand for strong, black, flavoured teas in the international markets. This made Ruhuna tea a speciality. With the help from that boost, Ruhuna remains to be one of the key-tea producing districts in the country, followed by Sabaragamuwa.

Both of these provinces account for 60% of Sri Lanka’s total tea production. The tea estates of Ruhuna lie at sea level and 2000 ft from that. It is a low-grown variety. The climatic conditions available in the area prevents the trees from receiving the full force of the southwest monsoon winds. Before tea, most of these cultivation zones were occupied by spice growers. The soil in the district is rich enough to support any plantation. It helps the tea bush to grow rapidly while producing a long, beautiful leaf that turns black when withered.

Last but not least, Sabaragamuwa is an area of rich, fertile soil. Although it is most known for its unique composition of gems and other precious stones, Sabaragmuwa is also Sri Lanka’s largest tea-growing region. Political changes in the Middle East and the former Soviet Union had inspired the boom of Sabaragamuwa tea cultivation, just as it did on Ruhuna tea. Sabaragamuwa tea is low-grown until an elevation reaching  2500ft starting from the sea level. The highest tea estates of the region are located just below the boundaries of the Sinharaja forest and Peak Wilderness reserve. These estates share the microclimatic conditions produced by the rain forests, cloud forests, and the high plains unique for this region. As a result, such tea can have different characteristics compared to what’s grown at a lower elevation of the same region.

The tea-growing areas of the Sabaragamuwa region cover most of the Southwestern surfaces of the central mountains. The valleys of the hillside are occupied by rivers which is a perfect natural drainage system for any excess water that flows down the hills. The estates receive most of their water from the southwest monsoon. The southwest monsoon showers the estates providing the atmosphere of a tropical rainforest where it is hot and humid in the open, moist and cool where the cover is thick. When poured into the cup, the tea from Sabaragamuwa shares similar traits as tea from Ruhuna. It is dark yellow-brown with a reddish tint. But the aroma inspired by a hint of sweet caramel helps it to distinguish itself from other varieties.