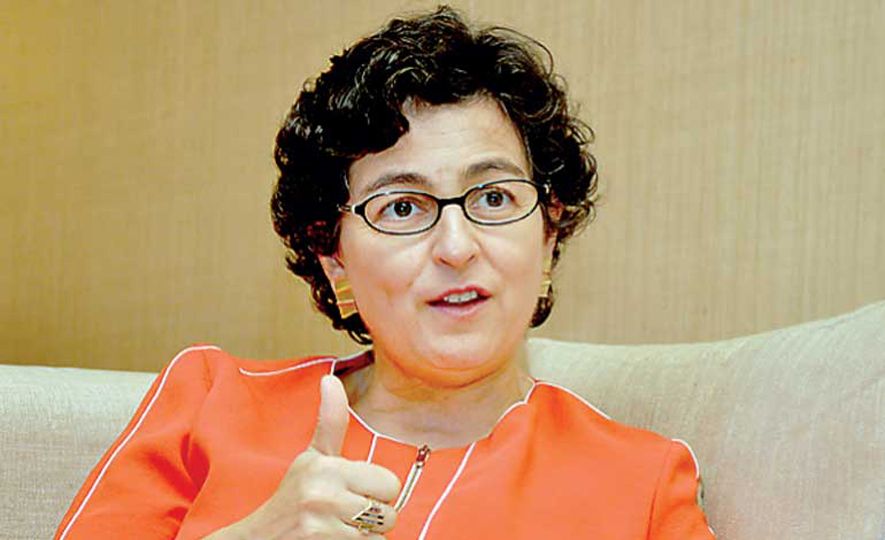 ITC is the joint agency of the United Nations Conference on Trade and Development and the World Trade Organization. Gonzalez is in Colombo this week to meet with key Government officials and attend the sessions of the WEDF on Wednesday and Thursday. The forum has been billed as one of the largest trade promotions forums to date with hundreds of local and foreign companies participating in nearly 3,000 “speed dating” sessions during the next two days.

“Sri Lanka has huge opportunities, a great location, a very committed Government to improve, attract and nurture investments as well as a productive labour force. This is what makes Sri Lanka an interesting place for investors,” she told Daily FT.

“We want to support the efforts of this country, both the government and private sector, at using trade as an engine for growth, for job creation. This requires focusing on the business environment and competitiveness, but we believe that if you put the two together we have a very powerful ingredient to help this country catch up or even overtake countries in this region which, while this country was focused on internal affairs, moved very quickly forward.”

The private sector was given a significant vote of confidence by Gonzalez, who was upbeat about both the companies’ competitiveness and the adaptability of Sri Lanka’s human resource.

“Now is the crucial time. There are expectations in this country that a more peaceful, united country can bring dividends to its people. We do believe that is the reality but to move from words to deeds there needs to be a very robust trade agenda. We strongly believe in the trade agenda, institutional dedication, but most of all we believe the business sector of this country is robust and deserves support precisely at this point in time.”

The Government is responsible for making trade possible, especially negotiating trade agreements and improving the business environment, the Executive Director pointed out, insisting that reforms to encourage exports had happened over the last six years. She stressed that the ITC had seen “significant progress” under the current Government.

The ITC in a Survey of Business in 2010 interviewed 500 Sri Lankan companies and conducted in-depth studies on 200 of them, across sectors and sizes, across the country. Six years later it was redone with a smaller number of those same companies to track changes and 56% of those companies that were polled in both in 2010 and 2016 said the business environment had improved, she noted.

“This tells us their ability to export has improved because procedures and documentation can now be done online. Now of course there is still a list of things that needs to continue to be fixed but 56% shows that there has been progress. We have also found that about 55% of the small companies have diversified export markets and products because they have better information about how to access markets. It shows that access to intelligence, which was a big obstacle when we polled in 2010, has been addressed. So I see the bottle as half full and I think that deserves support.

“You still have to make trade happen. That is why this forum is about how to make trade possible. We are going to have a lot of discussions around regional agreements, standards and regulations, inclusive tourism, as well as a robust B2B program for tangible deals to materialise.”

ITC will also roll out a plan funded by the European Union that seeks to increase the competitiveness of Sri Lanka’s Small and Medium Enterprises (SMEs). The € 8 million program is set to improve the business environment, trade facilitation measures and focus on quality. The program will also focus on creating value chains in the agriculture and service sectors.

The slew of free trade agreements currently under negotiation with China, India, Singapore and other countries will give Sri Lanka access to a market of over two billion people but investors would still have to concentrate on niche, higher value addition products and services given Sri Lanka’s comparatively smaller population, she cautioned.

Gonzales also advocated that all concerns on economic liberalisation had to form part of a dialogue that was not just limited to particular industries but was of a wider nature with stakeholders around the table that would represent all sectors in order to have a sound trade policy.

“If you don’t have all these voices around the table you run the risk of trade policy getting captured by single interests. A country has to take into account collective interest.”

She also called on the Government to establish its own standards on measuring ease of doing business but to monitor it diligently to ensure tangible progress would be felt by the private sector.