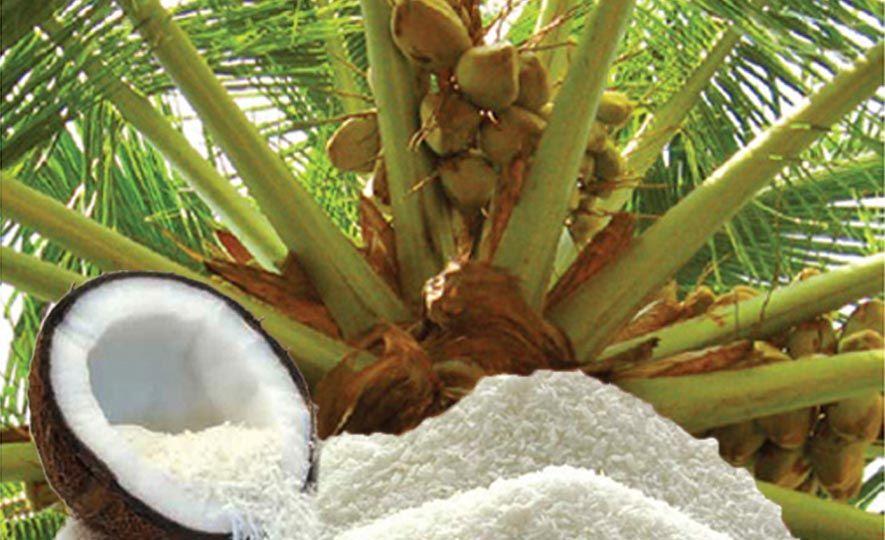 Desiccated Coconut is a dried white, shredded particular manufactured from the peeled kernel of the seasoned coconut. It is used in the bakery and confectionery industry for ﬁllings for nut bars, cookies, biscuits, sanding of cakes, pies and other baked goods. Nearly 8000 nuts are required to produce 1 ton of desiccated coconut (DC).

Sri Lanka is the birthplace of the DC industry, the ﬁrst factory was established over a century ago in 1880 in Colombo, and continues to be one of the country’s leading food-processing industries. There are around 66 DC manufacturing facilities in Sri Lanka which are mostly located in the coconut triangle. The processing capacity of an average factory varies from 30,000 - 40,000 nuts per day with an industry output of around 60,000 tons per annum.

Desiccated coconut from Sri Lanka is celebrated for their fine texture, flavour and lightest colour and is considered the best DC in the global market.

The term “Desiccated coconut” stands for grated and dehydrated coconut meat which is mainly used for bakery and confectionery industries. The process includes a selection of coconuts, husking, shelling, removing the Testa, washing, heating, disintegrating, drying, sieving and packaging. After the food is being de-husked, it is sent to the factory where they are split using a special knife to obtain a complete, undamaged ball. The outer Testa is also removed using a special knife. Then the pair of kernels are cut and the coconut water is discarded. After the kernel pieces are pasteurized under the correct temperatures, it goes through the process of grinding and shredding. The obtained product is then adjusted to correct temperatures and then packed after cooling and being graded by size. (1)

Potential of the industry

As an industry, Desiccated coconut has always shown signs of potential when it comes to reaching a country’s economic objectives. With coconut being one of the major crops of Sri Lanka since the colonial era, Sri Lanka has evolved to become the fourth largest coconut supplier in the world. The annual coconut production of the country is around 3000 million nuts. From this output, 65% is subjected to domestic consumption while the rest is directed to exports. The desiccated coconut industry is one of the most important food processing industries present in the island. Even during the early 2000s, there were more than 66 factories located within the coconut triangle of Sri Lanka performing the production of desiccated coconut. (2)

While being in high demand in the USA, the Westers Asian Countries, and Pakistan, the export of desiccated coconut has increased also triggered by the increasing demand for the coconut-based products in the European markets. The natural foundation that powers the entire country’s coconut production is a major reason for this high international demand. This is also followed by the ethical practices followed in the process and the experience possessed by the involved sectors. (3) This has also opened doorways to the export of other value-added products of the industry such as virgin coconut oil, coconut milk, and coconut milk powder. The main reason for Europe to be a constant customer for desiccated coconut is its use as an ingredient in traditional baking. Also, its support towards “Healthiness” is another point of concern. (4)

Throughout the years, Sri Lanka has produced a range of desiccated coconut products, for the global market, which is celebrated for its premium quality,

The fat present in desiccated coconut is further eliminated with the use of ethanol as it is replaced with ethanol once every 12 hours until the ethanol is removed from the coconut through heating. (5) This product only contains medium amounts of fat which range from 35% - 40%. Even after most of the fat is removed, this form of coconut does not fail to deliver the original taste. (6)

Desiccated coconut which is chipped and powdered is also available in different flavours. These flavoured versions are often used in the preparation of sweets, desserts, smoothies, and baked goods. (7)

At present, Sri Lanka serves only 8% of the demand for desiccated coconut in the EU while the country serves 5% of the overall global demand for fresh and dried coconuts in the world. Despite the growing demand for coconut-based edible products around the world and Sri Lanka’s reputation as the best producer of desiccated coconut in the world, the country’s overall edible coconut export value has reduced from USD 75.3 Million in 2008 to USD 68.3 Million in 2018.

The average annual coconut crop production in Sri Lanka is around 3000 million nuts, of which around 65%is directly used for domestic consumption and the remaining is absorbed by two industries, 18% by the desiccated coconut industry and the rest by the coconut oil industry. While the former is export-oriented, and the latter caters mainly to the domestic market.

The country has been facing a long term shortage of coconut yield, mainly due to loss of cultivation land and reducing yield in the existing coconut estates. The gradual reduction of Sri Lanka’s coconut yield has negatively affected the growth potential of the country’s export-oriented coconut industry and only an immediate intervention from the public and private stakeholders of the industry.