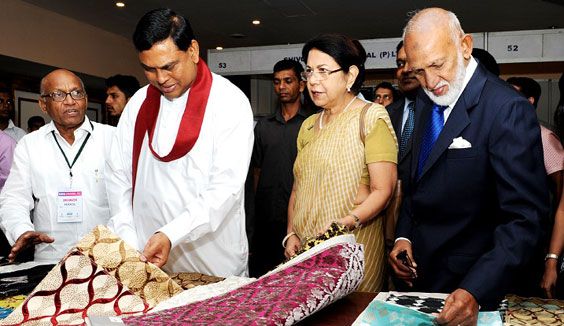 Ms Chaterji was addressing Anura Siriwardena (Secretary, Ministry of Industry and Commerce of Sri Lanka) on 09 September at Cinnamon Grand during her delegation’s official meeting with Sri Lanka’s delegation after the signing the first ever MoU between India and Sri Lanka on the same day at Galadari Hotel, Colombo earlier. During the successful Cinnamon Grand meeting, officials from both sides discussed in depth, of the modalities of the morning MoU and how to move forward and implement it in the coming months and agreed on the immediate next steps.

“The objective of this historic MoU being the expansion of the business and co-operation in the development of SME in Handloom, Power-loom and Textile sectors. The period of Memorandum of Understanding will remain in force for five years from the date of signing the MOU and it can be renewed thereafter.  The key persons in the resulting Joint Working Group (JWC) are the co-chairs –the Additional Secretary of the Ministry of Industry and Commerce of Sri Lanka and the Joint Secretary of the Ministry of Textiles of the Republic of India–as well as members who will collaborate on this MOU. We strongly believe in the involvement of the private sectors of both countries in taking this process forward” said Secretary Siriwardene, addressing the morning MoU signing event at Galadari Hotel. “We also observe that there appears to be much more unrealized potential for Sri Lankan textiles to serve the Indian textile markets and we are confident that this delegation will understand and support us to further enhance this direction. I would like to stress our strong appreciation towards Hon Anand Sharma, Indian Minister of Commerce and Industry who, during his visit to Sri Lanka in 2012 for his pioneering steps towards this bilateral textile MoU as well as for his extension of our textile export quota to India from three million to eight million pieces as a result of the  successful Discussions he had with HE the President Mahinda Rajapaksa, Ministers Basil Rajapaksa and Rishad Bathiudeen. We thank especially the Treasury Secretary Dr PB Jayasundara for his untiring efforts in making this MoU a reality” Secretary Siriwardena added.

According to the Department of Commerce, total Indo-Lanka trade in 2012 stood at $ 4.086 Bn. During January – June of 2013, exports from Sri Lanka to India stood at $ 279.17 Mn while imports from India at $ 1465.65 Mn, showing a declining trend in imports from India. India’s appetite for Sri Lanka apparels and textiles too has grown steadily. Last year, India was the 8th buyer country of Sri Lanka textiles and garments with $ 64 Million which was a three-fold increase from 2008. Also last year India became the 10th buyer country of world famous Sri Lanka apparels purchasing $ 39 Million of apparels, which was a strong 44% increase from 2011. I am sure that you may already be aware that Sri Lanka Apparel has become one of the world’s leading proponents of ‘Ethical Business and Manufacturing Practices’ for the Global Fashion and Apparel Sourcing Business. In 2012 India also ranked the second largest buyer of Sri Lanka’s woven fabrics category with $ 20 million purchases which was a 42% growth from 2008.

Ms Zohra, addressing the MoU signing event at Galadari Hotel, said: “Textiles is an area which has immense promise for the mutual benefit of both our countries. Sri Lanka is India’s largest trade partner in South Asia. India is Sri Lanka’s biggest trade partner. Seeing that 45% of Sri Lanka’s exports account for garments, it is opportune for both countries to join hands to capture a larger global market share. The market opportunity is here and now it is for us to respond fast. This would be going. Sri Lanka offers fast delivery, faster transit times, low transit costs, we are able to supply flexible quantities of your yarn requirements. There are opportunities for joint investments both ways. The current MoU approved by Sri Lankan side is limited to SMEs of handloom, power-loom and textiles only but the Indian government is willing for a larger engagement -all sectors of Sri Lanka’s value chain in the next stages-including handicrafts. For now we are happy to go along with your strategy of incremental approach in textile cooperation process, we keep the doors open for expanding this textile cooperation further.”