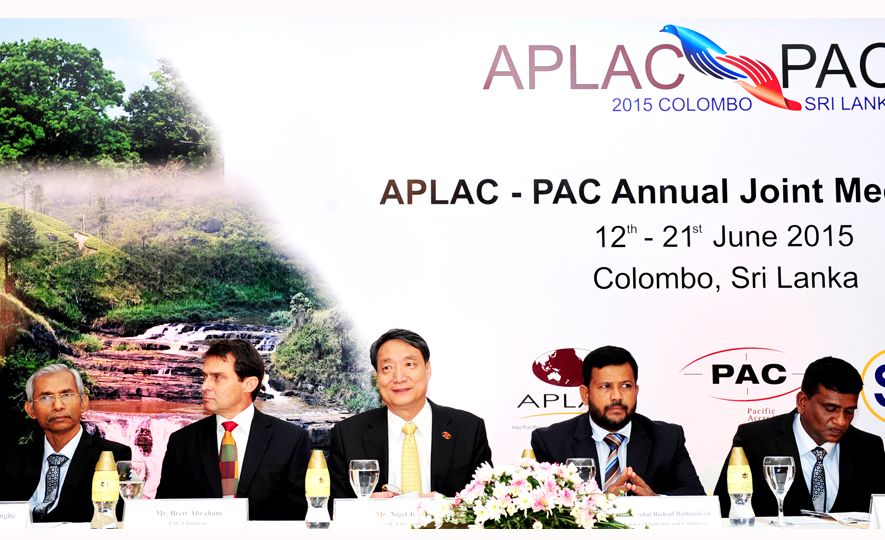 Ushering international recognition for Sri Lanka’s conformity realm, the first ever Asia Pacific accreditation confab took off in Colombo on 15 June -and the country has accepted 14 international standards in 2012/’13. “Under the purview of my Ministry, we have taken various measures to promote accreditations in Sri Lanka. This is done with a view to enhance living standards and even our exports. Sri Lanka also issued 145 new ISO certificates and 14 international standards” said Rishad Bathiudeen (Minister of Industry and Commerce of Sri Lanka) on 15 June in Colombo.

Minister Bathiudeen was addressing the inauguration of APLAC and PAC joint General Assembly Meeting on 15 June in Colombo. The second APLAC and PAC joint General Assembly Meeting to be held ever, the event also celebrates the 20th anniversary of PAC. 15 June Kingsbury event signalled the formal launch of the 9 day-long event with host government’s backing. More than 170 international delegates from 35 economies are in attendance at the Colombo event. Among the 9-day agenda items are technical and training sessions (such as on ISO/IEC 17020), APLAC/PAC general training sessions, host economy seminars, peer evaluator's workshops and a technical visit.

“Under the purview of my Ministry, we have taken various measures to promote accreditations in Sri Lanka. This is done with a view to enhance living standards and even our exports. 16 national Medical laboratories are already SLAB accredited while 10 more applications are under consideration. We believe that accreditation helps competitiveness of Sri Lankan products in international markets and a survey is also now underway to exploit new and emerging markets for Lankan products. SLAB has been actively engaged in seeking mutual recognition arrangements with regional and international bodies on testing calibration and certification. This is also due to the realization that accreditation is becoming a more and more important factor in Sri Lanka’s global market access. As a result SLAB will introduce organic certification to Sri Lanka this year. National Organic Control Unit (NOCU) under our Export Development Board has been recently established to function as the monitoring body of organic products. In 2012 Sri Lanka also issued 145 new ISO certificates and 14 international standards were adopted by Sri Lanka standards institution. Sri Lanka is a member of SAARC. We have developed harmonized standards for identified common products to exchange them under mutual recognition programmes. Various committees have been appointed to develop guidelines for trade facilitation and conformity assessment. There is a suggestion that SAARC countries will have an economic integration initiative with ASEAN economic community by the end of this year. Therefore it is timely for SAARC countries to develop economic policies harmonized guidelines and identical strategies to win ASEAN markets. In this context the mutual recognition arrangements established under the guidance of Asia Pacific Laboratory Accreditation Cooperation and Pacific Accreditation Cooperation for testing calibration inspection and certification is considered as a step in the right direction for our international trade development. We commend the support of both APLAC and PAC in this regard.”

“APLAC has the international acceptance as the largest regional accreditation cooperation effort, and is growing strongly. As a regional body we are becoming more and more important in the Asia Pacific’s international trade” said Nigel Jou (APLAC Chairman) addressing the event, and added: “We now have 424 member institutions representing 26 economies. We were invited by WTO Technical Barriers to Trade team to talk about how accreditation and conformity assessment procedures addressed the trade issues in the region.”

In 2013, 1.56 million ISO standards certifications were issued across 95 countries.