EDB in fresh push to boost gem and jewellery in Thailand 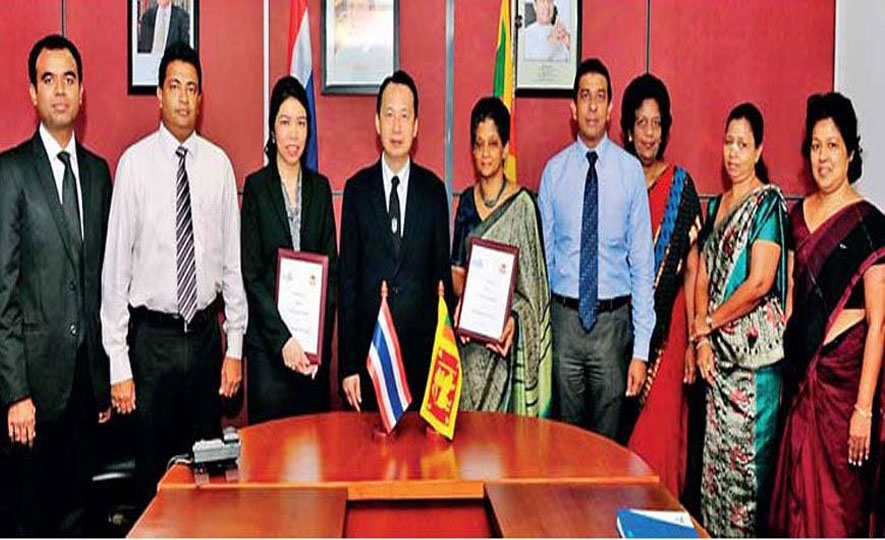 The Export Development Board (EDB) entered into a promotional agreement with Thai Trade Centre Chennai (TTCC) on 7 February to further develop two-way trade between Sri Lanka and Thailand.

The agreement that was entered into between EDB and TTCC was a result of long and effective discussions between the Sri Lanka Embassy in Thailand, EDB, NGJA and SLGJA. The agreement was signed in the presences of the Ambassador for Thailand in Sri Lanka Nopporn Adchariyavanich at the EDB in Colombo.

Malwatte stated that the signing of this promotional agreement was the initial step in strengthening the relationship between Sri Lanka and Thailand and she was hopeful many more such constructive collaborations would take place within the next few years.

Nakamano stated that she was very happy that the TTCC was able to initiate this dialogue with the EDB and was extremely confident that this would build a very fruitful and long-term relationship between the two countries in furthering business opportunities.

The gem and jewellery industry is the fifth-largest foreign exchange earner and is identified as one of the key sectors which could contribute to achieving the set export targets of Sri Lanka. Thailand is one of the key markets for Sri Lankan gems and jewellery at present and has a huge potential to further increase exports.

Sri Lanka has been maintaining a cordial relationship with Thailand for a long period of time and trade between the two countries has progressed steadily during the past decade. In order to strengthen the existing business relationship and to increase Sri Lanka’s presence in this lucrative market, EDB has undertaken and proposed to implement a number of trade-related activities in Thailand.

The Sri Lanka Embassy in Thailand is doing a mammoth service in this regard and is very actively pursuing the promotion of Sri Lankan products in Thailand and other mutually beneficial collaborations between the two countries.

Last year EDB in collaboration with the Sri Lanka Embassy organised an Advanced Design Development Training program for 10 designers at the Gem and Jewellery Institute in Thailand. EDB proposes to engage the services of these designers to impart knowledge for local designers especially in the provinces and the first workshop will be held in Galle in March 2017.

Due to the efforts of the Sri Lanka Embassy in Thailand, the EDB, NGJA and SLGJA initiated a dialogue with TTCC to explore further collaboration to promote the gem and jewellery industry.

As a result of these discussions, it was decided to enter into an agreement with the TTCC to promote the Sri Lankan gem and jewellery industry at the 59th Bangkok Gem and Jewellery show in 2017 by organising a promotional booth at the February show where the FACETS Sri Lanka 2017, International Gem and Jewellery Show would be effectively promoted and Sri Lanka’s participation at the September show.

The NGJA will sponsor 10 students and an instructor of Jewellery Manufacturing and Crafting of the Gem and Jewellery Research and Training Institute to engage in a three-day program with the view of enhancing their knowledge of world trends in jewellery manufacturing technology and crafting during the February show.

Although a large number of Sri Lankan exporters of gem and jewellery are visiting Thailand and a lot of business is generated at present, participation at the Bangkok show is very limited. Therefore, it was felt that formalising the business between the two countries through Government collaboration would be more effective and in turn would increase export earnings.