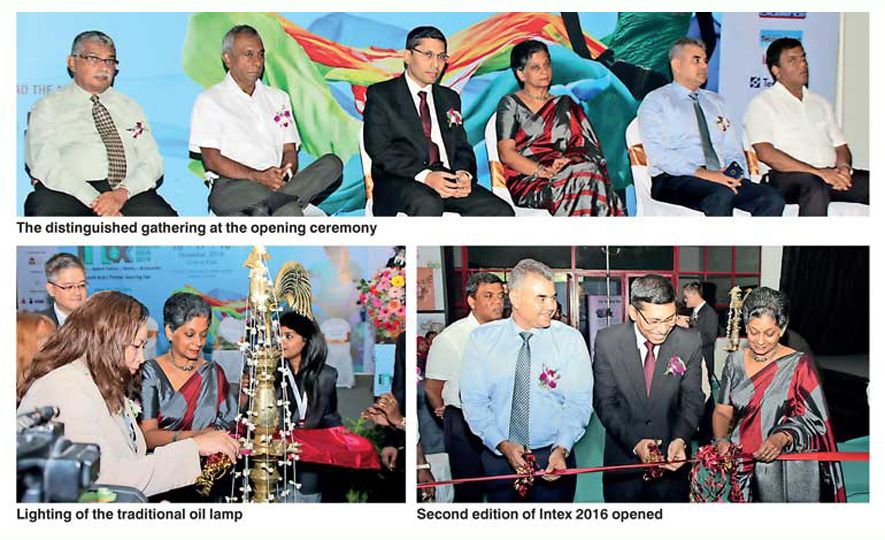 Intex South Asia, the only international sourcing fair in South Asia which showcases the best in yarns, fabrics (apparel and denim) and clothing accessories, is presenting a grand display at the Exhibition and Convention Centre (SLECC) in Colombo from 16-18 November.

It is the second edition of Intex South Asia and in anticipation of the Sri Lankan apparel industry regaining GSP+ concessions, this year’s exhibition was successful in bringing more than 150 exhibitors from Italy, Japan, South Africa, Korea, China, Taiwan, Singapore, Malaysia, Indonesia, Pakistan, Bangladesh and India to Sri Lanka.

Intex South Asia 2016 was inaugurated by the Acting High Commissioner of India Arindam Bagchi, with the event graced by Export Development Board (EDB) Chairperson and CEO Indira Malwatte, who served as its guest of honour.

Many distinguish guests representing the textile industry were also present at the inauguration ceremony together with presidents of leading trade bodies from Sri Lanka and other countries.

Addressing the opening ceremony, the High Commissioner of India, Arindam Bagchi, pointed out the importance of strengthening links within the region.

The High Commissioner explained how the Government could support and facilitate these kinds of events but private sector involvement was what took it forward towards success.

“We would like to see this as a regular feature on our annual calendar,” the High Commissioner asserted.

“India and Sri Lanka have a close political relationship and it is time for us to work on better trade and investment relationships.”

Commenting on Intex South Asia 2016, the EDB Chairperson and CEO Malwatte said it was encouraging to see that the fair had improved further from the previous year.

“This is a very good opportunity for the textile industry in Sri Lanka and I am sure the second edition will go far to increase its reputation as a trade fair which will take the industry forward in terms of manufacturing and exports. With a lot of anticipation for GSP+ concessions in the near future, the apparel industry will add around Rs. 300 million more in value, making these kinds of events vital for overall performance,” Malwatte stated.

Participating in Intex South Asia 2016 together with a delegation from Bangladesh, Deputy Secretary of the Ministry of Commerce in Bangladesh, Mohammed Zafrul Islam Azizi, showed great interest in exploring opportunities and building business relationships. “Sri Lanka has great capacity to develop as a regional hub for textiles and we are happy to associate with them seeking mutual benefits on this long journey,” Azizi revealed.

South African High Commissioner Robina P. Marks pointed out that South Africa was a huge market for Sri Lanka to concentrate on.

“We are keen on improving trade links with Sri Lanka to strengthen our business relationships, and trade platforms such as Intex South Asia 2016 will create ideal opportunities,” said the High Commissioner.

Intex South Asia 2016’s organisers said that it would be the best platform to make the right business and industry decisions under one roof.