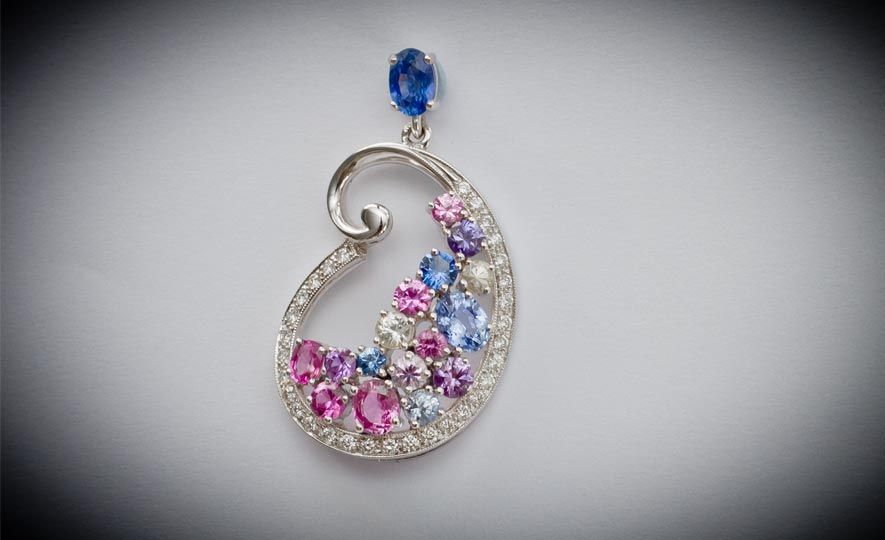 Sri Lanka ranks with Myanmar, Brazil, South Africa and Thailand as one of the world's most important gem-bearing nations. Although Sri Lanka is largely known for precious sapphires and rubies, the main types of gemstones found in Sri Lanka belongs to five major categories, which are; corundum, chrysoberyl, spinel, garnet and tourmaline.

The group Corundum contains some of the most rare and expensive gem stone varieties found in the world including sapphires (blue, yellow, golden, white & star), rubies and geuda.

This oxide of aluminium complex produces the most expensive and most sought-after coloured gems of Sri Lanka, named after their colour shade such as ruby for deep red, padmaraga for every shade of pink and pinkish orange and sapphire for shades of blue varying from deep blue to sky blue.

The Blue Sapphire is Sri Lanka's gem supreme.  And her blue sapphires are the finest in the world.  Tone of the highly priced gems of all times, it is second only to the diamond in hardness.  The world's largest known sapphire weighing 42 pounds was found in the gem gravels of Sri Lanka.

The yellow sapphire or the Padparadscha are of a colour that is unique to Sri Lanka. Identical to the colour of a red lotus, the colours of yellow sapphire varies between the hues of pinkish orange to yellow and are found mainly in the Balangoda area in Sri Lanka.

Although star sapphires share the same colour shades of a normal sapphire, its external appearance varies greatly due to the asterism caused by certain minerals. These rough cut stones usually display a reflection of six, or in rare instances a twelve rayed star on the cabochon surface of the blue, purple, pink and grey coloured Star Sapphires found in Sri Lanka.

Although sapphires are the pride and glory of Sri Lanka today, Sri Lanka has been celebrated in the days gone by for large pigeon blood coloured rubies found in Embilipitiya and Udawalawe areas. Most Sri Lankan ruby varieties are of a pinkish red and display a tint of purple which is unique to the stones that are of Sri Lankan origin.

Geuda is the latest addition to the Corundum family. With a basic body colour ranging from pale blue to yellow to pink, geuda is commonly heat treated in to transparent blue sapphires. Of all the Corundum gems mined in Sri Lanka, nearly 40% could be categorized as treatable Geuda material in which transparent colours could be induced through heat treatment.

Chrysoberyl is the third hardest gemstone found in abundance in Sri Lanka. The Chrysoberyl family of gemstones includes colourless zircon or Matara Diamonds, which is a popular diamond stimulant in Sri Lanka, cat's eyes and alexandrite, which carries hues of green, blue and yellow inside.

Despite its shared similarities to diamonds, zircon or Matara diamonds are less strong than diamonds and are susceptible to wear and tear. Exclusive to a few mines in Sri Lanka, colourless zircon is an inexpensive alternative to diamonds.

Other chrysoberyl variety, which includes gemstones with various colour shade is widely known as an alexandrite and makes cheaper alternatives to coloured gems in gem and jewellery industry.

The most sought-after chrysoberyl from Sri Lanka is the cat's eye. The finest quality of cat's eye gems found in Sri Lanka has a sharp chatoyancy that appears to open and shut with the movement of the gemstone, with a superior colour contrast of greenish yellow and brownish yellow shades.

Garnets are an abundant group of gemstones in Sri Lanka found in almost every shade of colour except blue. Although made of one of the earth's most common silicate mineral compounds, only a limited portion of garnets is found in rare gem quality. The varieties of garnets found in Sri Lanka include Rhodolite, which has violet to purple hues, Almandite of varying red shades, Grossularite with varying shades of mauve to brownish red and Spessartite of yellow and brown shades.

Spinel too are a more common and inexpensive group of gemstones found in Sri Lanka in every variety of colours and shades. Tourmaline too is a semi-precious gemstone variety found in abundance in the gem mining provinces of Sri Lanka. Available in dark red to purple as well as brownish variation of colours, Sri Lankan Tourmaline gem tones are popular for their dual-colour variation.

Ranging from singular to frequent and precious to semi precious, Sri Lankan gemstones havehelped the world glitter for the last 30 centuries and will continue to do so for many centuries to come.