Educating a New Generation for a Better Future for Ceylon Cinnamon 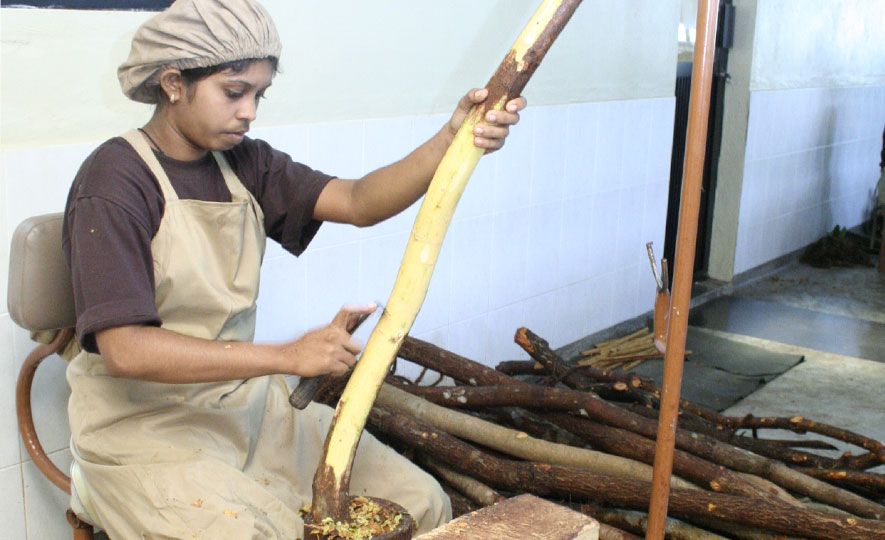 Sri Lanka holds the monopoly for Ceylon Cinnamon or true cinnamon, the celebrated spice that changed the human history forever. Made from the bark of the small evergreen tree called Cinnamomum zelanicum, Ceylon Cinnamon’s unique fragrance and taste, as well as its remarkably low amounts of coumarin, had made it one of the most sought after spices made in Sri Lanka, ever since the world discovered the many uses of Ceylon Cinnamon.

Today, cinnamon is the third largest agriculture export from Sri Lanka with 31,000 hectares under cinnamon cultivation employing nearly 400,000 people directly and indirectly. With an average export earning recorded at USD 132 million and another USD seven million for value added products, cinnamon holds a great potential as a major revenue and employment generation avenue in Sri Lanka.

However, the lack of trained staff with the right knowledge in the fine art of cinnamon peeling as well as in good manufacturing practices has hindered the progress Ceylon Cinnamon was planning to make in the global market.

The chronic dearth of trained labor in the local spice industry and the prevailing social stigma against the sector has been the main obstacles to the development of Ceylon Cinnamon as a major export.

With a view to empower this export product, which was supporting the livelihood of over 70,000 smallholder growers and 350,000 employees engaged in processing and cultivation of cinnamon, United Nations Industrial Development Organization (UNIDO) in corporation with Export Development Board (EDB), Ministry of Industry and Commerce, Standards and Trade Development Facility, and the Sri Lanka Spice Council have taken the initiative to establish the Cinnamon Training Academy in Sri Lanka.

The Academy seeks to provide a complete education to the cinnamon harvesters as well as peelers in Sri Lanka, by providing them with the right education and understanding on maintaining the product and hygienic quality of Ceylon Cinnamon.

The Ceylon Cinnamon Academy (CCA), provides training and development programs for cinnamon factory officers, cinnamon field officers as well as cinnamon harvesters in managing and controlling all field activities from field preparation to harvesting of cinnamon plantations on the recommended agriculture practice as well as food safety management systems to optimize the yield and productivity from field to package.

By providing them with national vocational qualification certificates at the successful completion of the program, the CCA plans to attract school leavers and young blood to the industry, ensuring sustenance and quality of Ceylon Cinnamon in the future.

Equipped with the right knowledge and skills to produce cinnamon that meets the health and quality standard requirements of the global market, Sri Lankan cinnamon harvesters would be able to widen the reach of Ceylon Cinnamon in the global market.